Well there you have it. Every year, Primavera Sound has always managed to one-up most festivals in the world with their thoroughly-impressive lineups. This year is no different. Taking place in the wonderfully scenic location of Barcelona right in the heart of Spain, they’ve always prided themselves in producing a consistently excellent group of artists along with an immersive festival experience that doesn’t take away from its core — the music.

Many Singaporeans have made the pilgrimage over to Barcelona due to the relatively affordable flight prices compared to pricier destinations like California (for Coachella). While we ourselves have not made the jump to hop on a plane over there yet, this year is awfully tempting. Here are 10 reasons why you should take the leap and join the Primavera experience.

For the past few years, shoegaze has gotten a royal revival in popularity thanks to a stream of new indie bands infatuated with the genre. Genre innovators My Bloody Valentine were the first to reclaim their throne, with Slowdive following soon after with a world tour that included Singapore (thankfully). Now, shoegaze slackers Ride has joined in on the fun. Notable for having implemented a boatload of catchy psych flavours into the genre, expect a heavier set if Slowdive was a bit too mellow for your tastes.

For y’all people who like your music a little more emotional, guess what - Primavera has been accommodating enough to host the likes of American Football and Mineral on their stage. Gone for 15 years, and doing limited shows around the globe, man, you gotta catch American Football at least once before you clench your fists to the sky and shout “neveeeer meant”. Also after a 17-year hiatus, Mineral started doing shows again in 2014. We can’t say it enough: Go catch them.

Almost every self-assured and bold female singer-songwriter out there has Patti Smith to thank. Leading the way for American punk and injecting a confrontational attitude into femininity in music, she will be performing her trailblazing album Horses in full along with an acoustic/spoken word performance on another day. Adding to the dominance of strong female artists, pioneering riot grrrl bands The Julie Ruin and recently-reunited trio Sleater-Kinney will be making appearances as well.

Aye, nothing better to immerse in an out-of-body experience than a nice cup of drone. Drone metal masters Sunn O))) and Earth will be performing sets, both notorious for being dangerously loud (yo we're not kidding, you will need earplugs). As if that isn’t enough, Electric Wizard, Earthless and Pallbearer will be the harbingers of doom on the primarily-indie lineup. Oh yes, Swans too. The band is enough to shake the earth to its core.

Spread over three days, and with that massive amount of awesome acts, chances are you’ll manage to catch most of your favourite acts every day. You’ll probably be too busy running around but when you do find some down time, do check out the other happenings besides the music while you’re on the grounds.

A festival lineup is never complete without a healthy dose of hip-hop. 2014 was an excellent year for the genre and although there isn’t an embarrassment of riches for rappers here unlike Coachella, it’s still represented well with the confrontational super-duo Run the Jewels, psychedelic ambassadors of space Shabazz Palaces, New York breakout stars Ratking and rowdy Odd Future leader Tyler, the Creator.

If you’re not so much a person for guitars, there’s still plenty of dance acts to get you moving until the drugs wear off you’re tired. Other than the ones who’re already coming for Laneway for The Gathering, there are techno masterminds Underworld, cosmic dreamers The Juan McLean and Simian Mobile Disco along with the playful experimentation of Dan Deacon. Heck, if you love your dance music with a hearty slab of raw punk attitude, Death From Above 1979 should not be missed.

We’ve seen/will be seeing James Blake, Richie Hawtin, Jon Hopkins, Tune-Yards, Caribou, Belle and Sebastian and more — why not see them again and all at once, and with more acts. It’s like buying chilli fries and adding more meat and cheese for the same price. Such greatness.

Held in the beautiful cultural city of Barcelona, Primavera will be happening on the grounds of Parc del Forum, a public park by the sea. And if you’re planning to stick around, hey man you’re in Barcelona, all of the EU surrounds you. 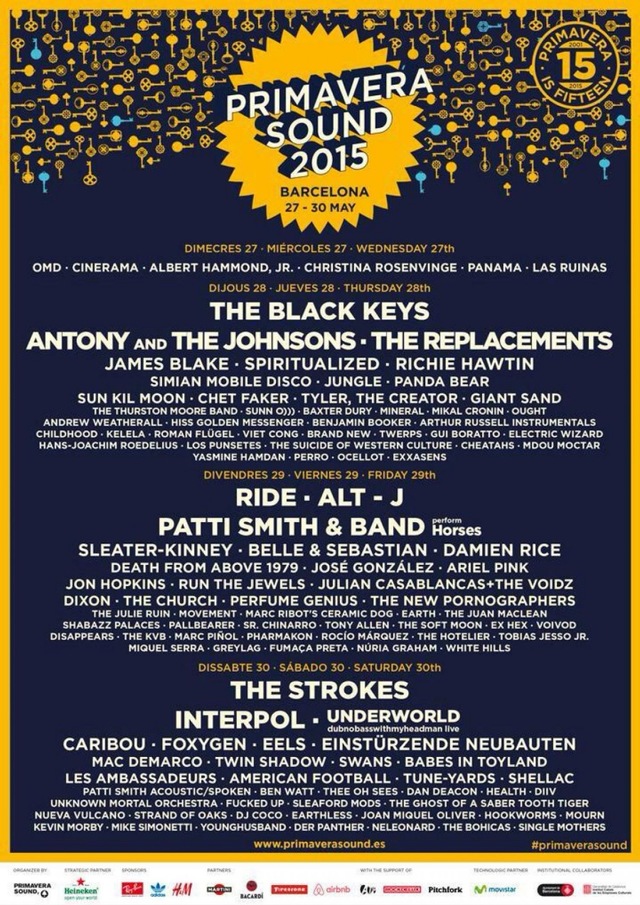