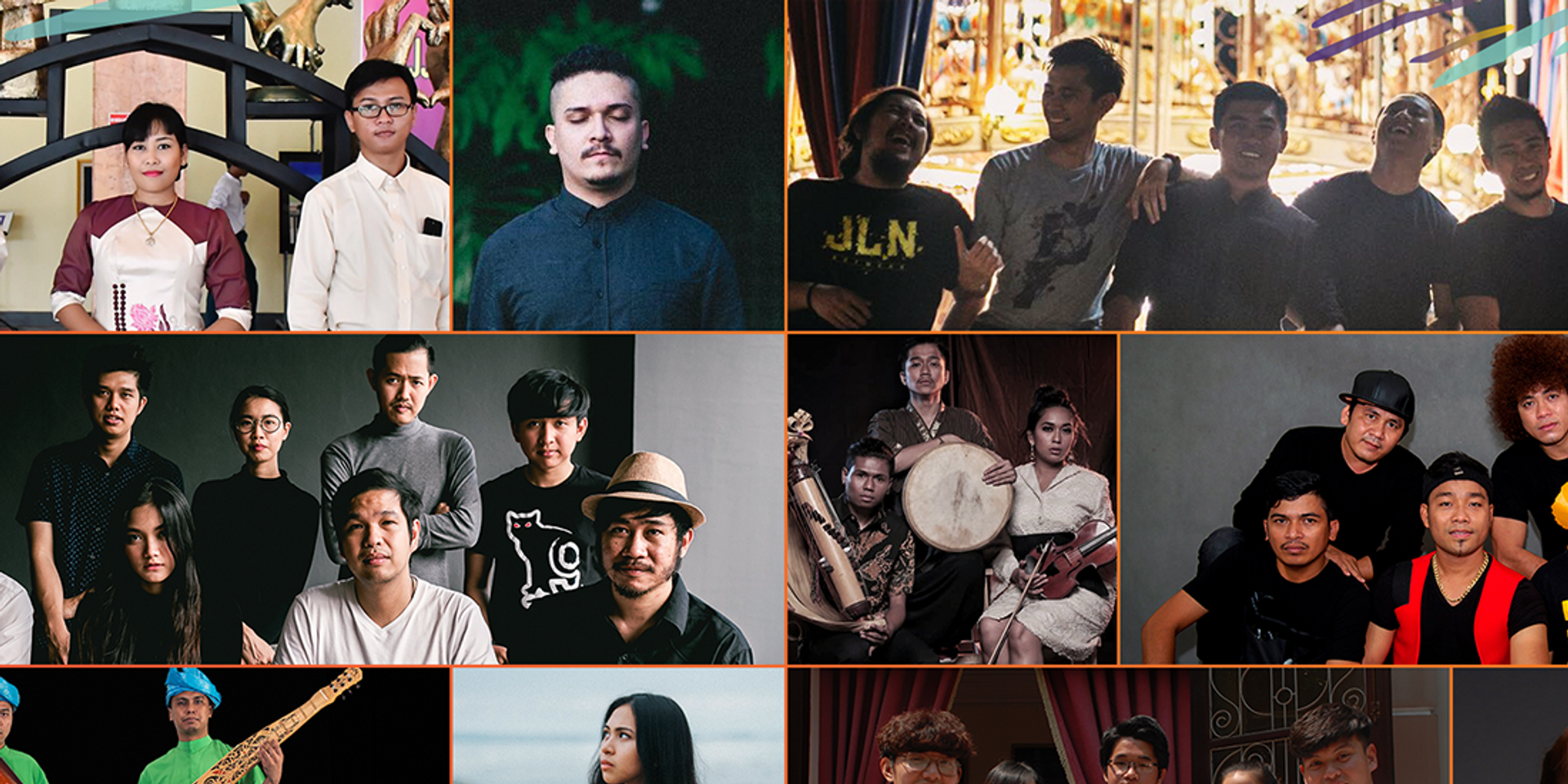 Southeast Asia is incredibly culturally and artistically diverse. Each of the 10 countries in the region has many distinct traditions and customs that inform its local arts and culture. One Voice: The Best of ASEAN Performing Arts 2018, which happens in November, will celebrate the musical diversity of the region with a night of performances by 10 musicians, each handpicked from their own country.

Get to know the 10 acts below.

A BAND ONCE – BRUNEI DARUSSALAM 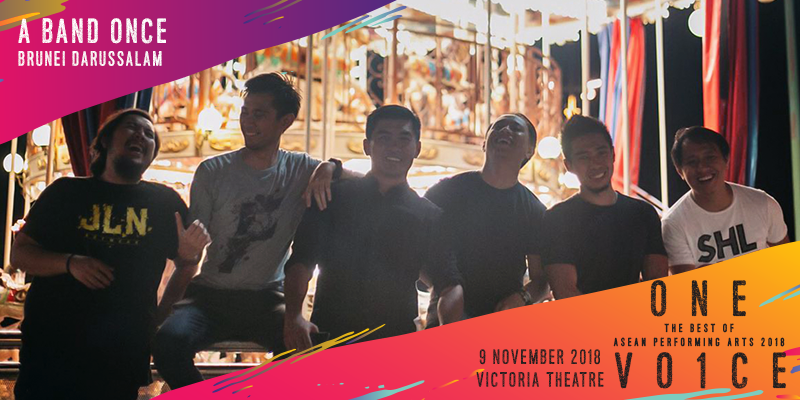 Formed in 2006 in Brunei, A Band Once was originally conceived as a three-piece rock band that later became a sextet to give the band a fuller sound. While the band was first created as a means for a couple of friends to hang out and jam to their favourite songs, the band’s passion for music led to the members writing their first song, ‘Te’a’, and the band has been on a roll ever since.

Drawing inspiration from bands such as Muse, Fall Out Boy, Peterpan and more, the band has perfected its alt-rock sound over the past decade to earn a legion of passionate fans from all over the region. 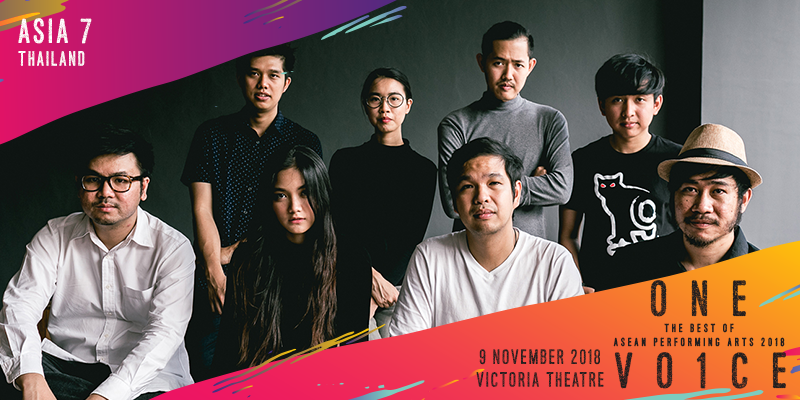 Asia 7 is the site of worlds colliding. Essentially, its musicality is a showcase of an inspired dialogue between traditional Thai modes and Western canons both accessible and mainstream. The band traffics in a show-stopping fusion of Thai folk music with pop and jazz. The resulting bang of this culture clash is irresistibly groovy.

To date, the band, which was founded in 2016 by a group of alumni from College of Music, Mahidol University, has performed in many international music festivals such as Ulsan World Music Festival 2018 (Korea) and Thai Festival 2018 (Norway), to name just a few. Truly, this Thai outfit is making the best case for musical—and cultural—progression. 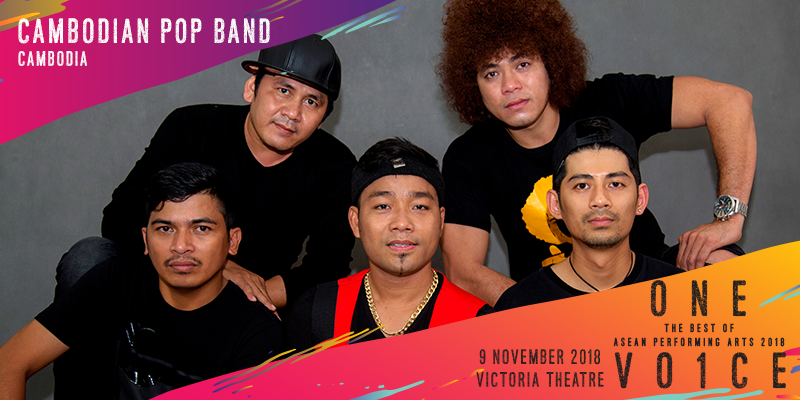 Fronted by prolific Cambodian singer Kong Sothearith, Cambodian Pop Band has built a loyal and supportive fanbase from across the ASEAN region after performing at the ASEAN Musical Extravaganza in Malaysia, the ASEAN Pop Song in Vietnam, ASEAN Music Festival in India and more.

Avid fans and supporters of the Cambodian music scene, the band performs a myriad of genres despite being labelled as a pop band. From soft rock to ballads and of course pop music, Cambodian Pop Band can do it all, and the band’s live performances and energy play a huge part in securing it a huge fanbase. 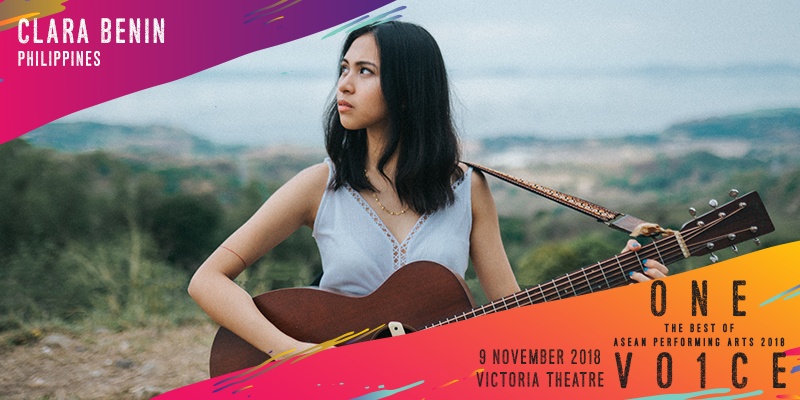 Filipino singer-songwriter Clara Benin will be returning to Singapore for the second time since September, where she played her first international show at the Bandwagon Stage of Music Matters Live 2018. Known for her soft-spoken demeanor and “coffee-shop” music, the 25-year-old has captivated the hearts of many with her two albums.

Apart from her solo projects, Clara Benin has also lent her music to TV commercials and independent films, making her one of the biggest musicians in the Philippines. Armed with her guitar, the musician will be putting her sultry voice and soothing style on full display at The Best of ASEAN Performing Arts 2018. 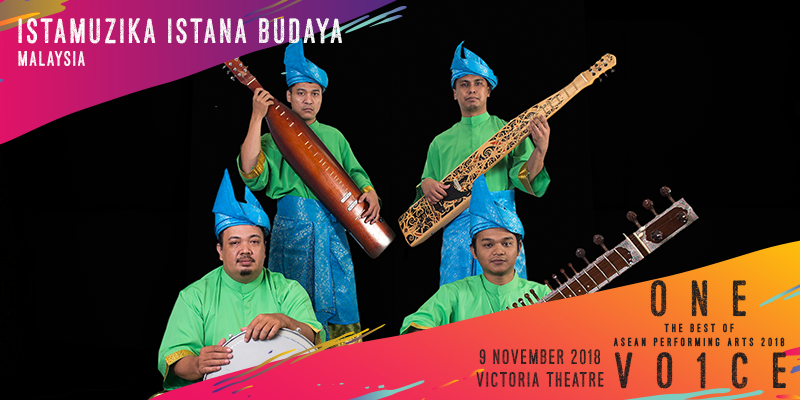 Istamuzika of Istana Budaya is a group of musicians from the Malaysian Traditional Orchestra, which is administered by the Music Division of Istana Budaya. This Orchestra comprises two sub-groups: Traditional and modern music. Led by Mr. Mohd. Yazid Zakaria as their Conductor/Composer/Arranger, the traditionally trained musicians focuses on traditional elements of music such as Asli, Ghazal, Wayang Kulit, Cak Lempong, and also performs contemporary music.

As members of the Malaysian Traditional Orchestra, Istamuzika has been travelling the world and performing countless shows to master their craft. The members of the group were also awarded a whopping 13 gold medals in 2008 at the World Championship of Performing Arts in Hollywood. 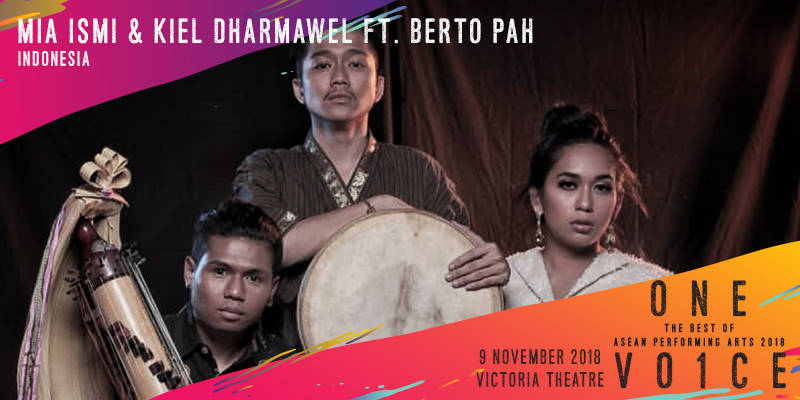 Indonesian singer-songwriter, vocal coach, vocal arranger and violinist Mia Ismi Halida made a name for herself with performances all over the world in countries such as Germany, Dubai, Russia, the Philippines, England and more. Known for her use of classical and traditional instruments to create contemporary music, Mia Ismi Halida seamlessly blends her breath-taking vocal chops with her instrumental capabilities.

The other half of the duo is Kiel Dharmawel, singer, choreographer and percussionist who was awarded a gold medal in the Indonesian National Vocal Group/Choir competition. The duo will be performing their duet ‘Batasan Dunia’. The duo will be joined by classical instrumentalist Berto Pah for the special performance. 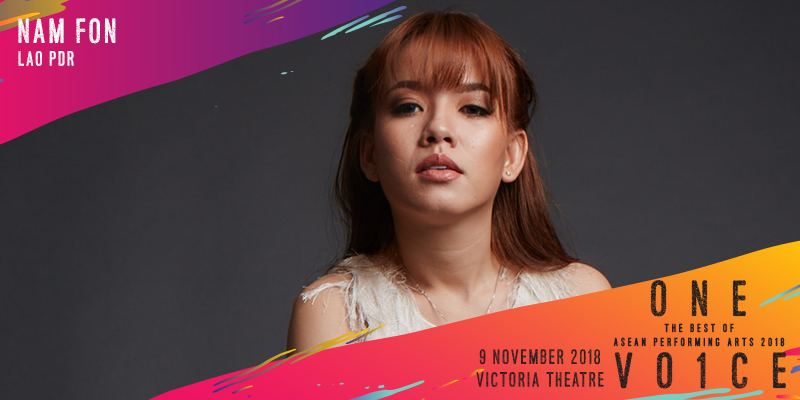 This Lao chanteuse is a veritable fully formed star. Besides her long list of accolades, which includes winning the 2013 Pepsi Singing Contest and being a brand ambassador for Adidas, she wields a pop prowess that is formidable and alluring. So universally appealing are Nam Fon’s charms that she has also represented her country in various cultural missions in Thailand, Vietnam and Japan.

When it comes to music, her lane is unabashedly straight-for-the-heart pop. Whether leading a devastating ballad or a slinky dance-pop tune, she’s utterly captivating. 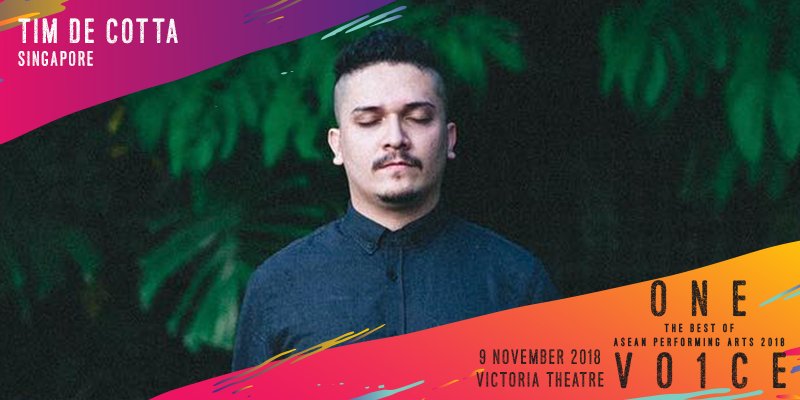 Make no mistake: Tim De Cotta stands firmly in the upper echelons of Made In Singapore music. No one will disagree that, in every field he’s involved in, he brings a passionate sincerity and consistently next-level touch in everything he does. The bassist and singer is a devoted disciple of the canons of hip-hop, funk and soul and his releases are as much a veneration of those modes as they are testimonials of his own musicality.

This year, he released his spectral single ‘Dreams’, which is a resplendent follow-up to his 2017 solo album The Warrior. He is a rising artistic force to be reckoned with. 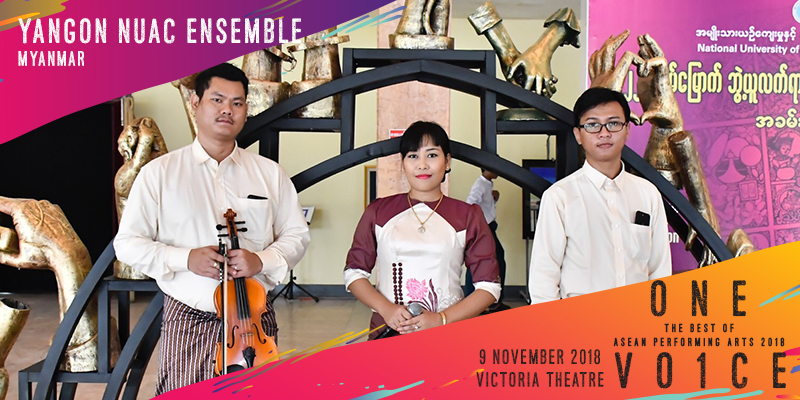 Mr. San Naung Dway, Mr. Thet Lwin Aung Htun and Ms. Khin Chan Nyein aren’t just musicians in a band. They are teachers at the National University of Arts and Culture in Yangon. This role informs their moniker: Yangon NUAC Ensemble. With Ms. Khin on vocals and Mr. San and Mr. Thet on assorted instruments, the trio has made quite an impression regionally and beyond with a series of high profile performances that displayed its handle on traditional Myanmar music: The 2016 SEA Games ceremony, ASEAN Summit in Myanmar and Malaysia as well as the ASEAN-Korea flute festival in the Philippines and Korea in 2017. 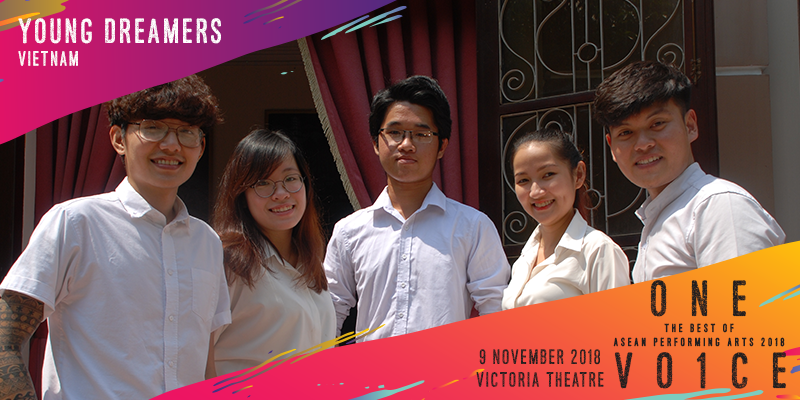 Every time a group of friends decides to come together and combine their disparate powers as a band, music-lovers can count on being on the cusp of a new discovery. This is part of what makes Vietnamese quintet Young Dreamers an enticing proposition. Having met at the prestigious Ho Chi Minh City Conservatory where they’d later graduate from, the five friends honed their kinetic melding of modern pop, jazz and rock until it was show-ready. Since then, they’ve become a mainstay in venues throughout Vietnam. Keep your ears peeled for more from this rapidly rising act.

One Voice: The Best of ASEAN Performing Arts 2018 will take place on Friday, 9 November 2018 at the Victoria Theatre. Entry is free. To secure your entry to the event, register here. Visit the official Facebook event page here.

Join these musicians as they discuss the role and power of music and words in defining their sense of identity as part of ASEAN at Voicing Your Self: Making Your Place. Entry is free, register here.