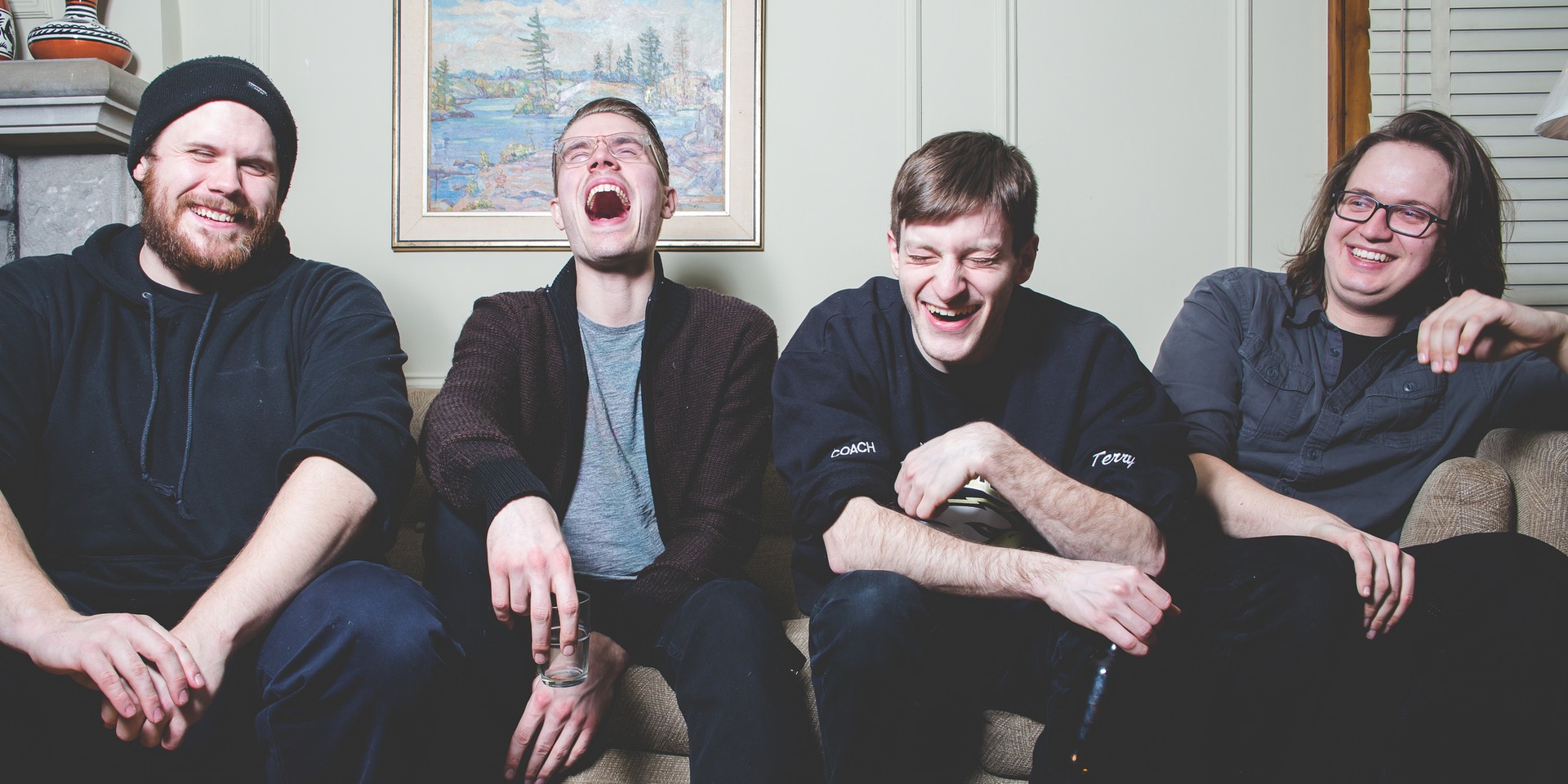 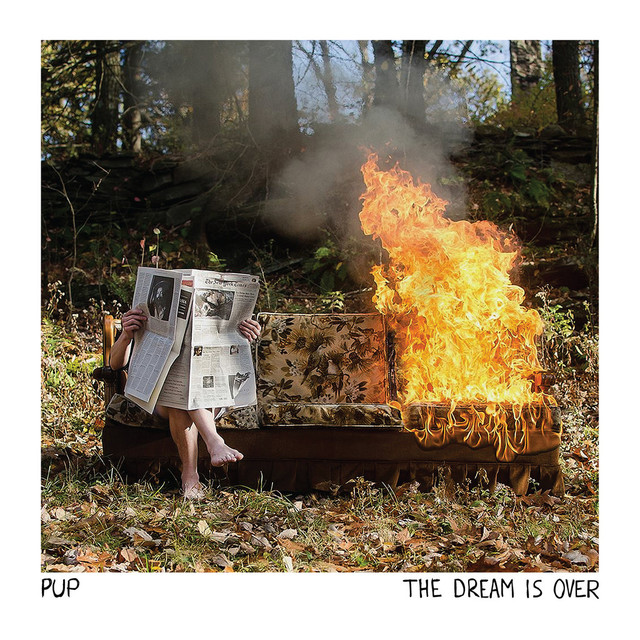 On a music video off the band’s debut album, lead singer Stefan Babcock explains a brief story of his to the camera — "Mabu", an affectionately named 90s era Toyota Camry and family heirloom has ran its course and might be coming to the end of its journey soon.

As a symbolic gesture, he enters his “best friend of 15 years” in a demolition derby, and the preparation that culminates is a visually impressive video that mirrors what PUP connote to many: plain, hard fun.

Pulling no punches for the final send off, they make Xzibit’s Pimp My Ride look like a side order. Like it’s the end of the world, they begin obliterating the glasses and windshields — with hammers, skateboards, a vintage tv and even a bag of flour at one point. The center console is turned into a water tank — complete with goldfishes and terrapins.

A chameleon perches in the glovebox and milk and cereal fill the trunk. It’s raw triumphant glory on PUP’s own terms. They really do “celebrate life - at the end of the earth.”

It was this defiant but indomitable attitude to never give up on a goal (which for them was to be in a touring band) that propelled PUP to continue — even when a doctor examined Babcock’s vocal chords and had told him that the “The Dream is Over.” A hemorrhaging cyst was found in his throat, the probable result of a densely packed touring schedule that featured 450 shows in just 2 years.

“That was kind of a big theme on the record, which is kind of overcoming disillusionment and fighting for what you want,” stated the frontman in a Indie88Toronto interview.

And so fighting for the dream to continue touring it was — the album opens with 'If This Tour Doesn’t Kill You, Then I Will', a track that begins with vocals peppered with trepidation, but with purpose, and cautious fingerpicking that foreshadows an explosion — one of commanding chorus backing vocals and a bleeding guitar that sashays proficiently in the background.

It’s a track about the tensions that arise when you put four grouchy bandmates, perturbed by the lack of proper rest, sleeping on floors next to each other every night — with the weight of an excessive touring schedule at the back of their heads.

It’s also a great example of timing and composure in a pop punk composition: churning rhythm guitars and a constant shifting variance in the lead melody — the attack and release are executed with the same level of detail that you can find in any PUP music video.

'DVP' immediately follows. Here, the band performs with such a reckless abandon that it’s nothing short of a coincidence of how the instruments and vocals intersect so neatly, especially on the hook and bridge. “I just don't know what to do, I'm still f*cked up over you”

As a punk rock album, the lyrical themes blend dark humour with a self-blaming existential edge — in a way, comparable to labelmates Jeff Rosenstock’s and AJJ’s recent records.

On 'Doubts', PUP come to terms with the negative sides of touring on a jittery, high strung auditory blitz — “I haven’t felt quite like myself for months on end; I spend more nights on the floor than in my own bed; and I never see my family and friends anymore”

But it’s on their convictions, where PUP shine the most. On the direct and powerful “Sleep In The Heat,” the personal subject matter (presumably on helplessly watching a loved one deal with drug addiction and overdose), pained vocals and climactic drums inspire the track to an enviable invincibility of it’s own.

On the bridge, the instrumentation is decluttered: chorus backing vocals and a focused bass drum remain. The lead guitar returns slowly and Babcock soon belches out passionately — the tune starts feeling like a real tear jerker. “I’m trying my best but you can’t even look at me or talk to me or tell me what’s happening to you” But then you read in an interview that it’s a love song about a pet chameleon he met on the making of the MABU music video and you wonder why you even bother with a review in the first place.

The winning streak however, does end on 'The Coast', an oddball tune about an ominous, “haunted” lake that breeds trouble, with townsfolk falling through the ice cracks. Next comes 'Old Wounds' — a dull and untidy mix with vocals rather whiny and harsh. The track as a whole doesn’t feel justified or just very well put together. But it’s on the ninth track, 'Familiar Patterns', which, at the beginning, showcases obnoxious guitar riff sounding like a broken bagpipe, where sour turns distasteful.

This is an album with a relatable immediacy, but does grows dreary with repeated listens. It’s a record with good intentions, but that doesn’t necessarily translate into a well-rounded and interesting album.

The Dream Is Over starts strong, brimming with confidence, but unintentionally loses focus and ends up meandering, tossing off so much lost potential that began forming on their colourful and potent debut.

In an interview with Upset Magazine, Stefan said, “I feel like every year of my life, I’ve learned something new about who I am and my relationship with the world. On the first record, a lot of the themes were about confusion, uncertainty and nostalgia about youth. This record, although I’m still confused, I’m less so than I used to be.”

That does explain the position PUP took when they were making the record. It’s an album of discovery, even if it might be at the listener’s expense at marks. Fumbling at the seams and messing around can lead to mixed results. There are organic moments where the talent is just undeniable, but there are also moments where it clearly doesn’t work out.

And it does leave some regrets because some tracks reek of attention to detail. They sound studied, painstakingly scrutinized, and perhaps worked to the bone until release, just like the track 'If This Tour Doesn’t Kill You, I Will'. Other times however, remind me of the frustrated narrator in the stories on some of the tracks: impulsive, careless and clumsy.

PUP's The Dream Is Over is now available through SideOneDummy Records.