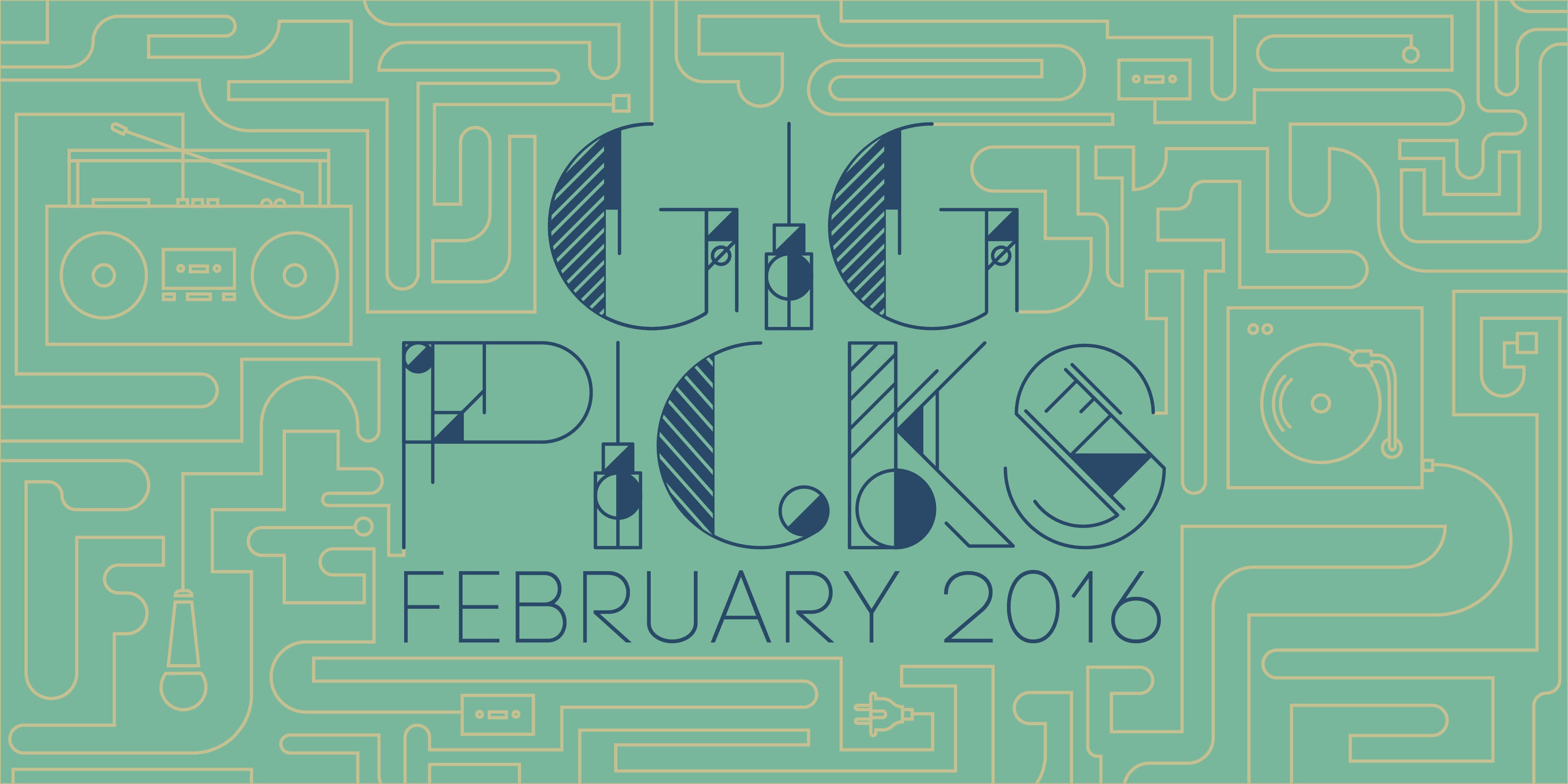 WHAT IT’S FEBRUARY ALREADY? It feels just like yesterday when we were making NYE plans.

Alas, the glut of amazing gigs in January has made time pass really quickly in 2016. And if your tired wallets were expecting a break in February, well, too bad. The shows aren’t slowing down and once again, we have an abundance to pick from. It’s a good problem to have really, and it's a problem we’ll happily handle for you with this month’s Bandwagon Gig Picks.

20 Feb - Tropos 1.0 Featuring Inspirative, Earthmover, This Is Atlantis and Arajua

Ever since the release of Bon Iver's 2007 album For Emma, Forever Ago, the indie music landscape hasn't been the same since. The singer-songwriter, real name Justin Vernon, perfected the lo-fi recording method to convey an immense range of emotion, running on melodically-driven vocal lines, creative multi-tracks and a relatable back story, all of which resulted in one of the most memorable folk records in the past decade. Bon Iver's been made a folk superstar group since then, backed up by the musically-expansive Bon Iver, Bon Iver and their lauded live shows. Returning from a self-imposed hiatus since 2012, this Asian tour will be Bon Iver's first since then — with Singapore being the third stop, who knows what he'll have in store for Bon Iver V2.

With many fans holding on to the hope that Madonna would ever come to Singapore, they've now been vindicated by their 20-odd year long wait. The Queen of Pop herself, initially banned in the 90s, will be staging her Rebel Heart Tour show in Singapore at the National Stadium. Even as ticket prices are high, you'll do well to learn after The Rolling Stones' surprise sold-out 2014 show that fans will pay the price, and then some. Better hurry!

The fruitful partnership between the Good Times crew and the ATTAGIRL crew continues with another collab party! The first Friday of February sees the Singaporean all-girl DJ collective taking over the second floor Blu Jaz space with a quartet of female DJs — some vets and some new — but all quality. As always, ATTAGIRL bosses DuriO and A/K/A will be helming the decks, but they’ll also be accompanied by two fresh faces in the form of London-based producer/DJ Kinnie (who did a Bandwagon Mix for us recently) and local future-bass upstart KRSTN. Entry is only $5 and as always, clothing is optional.

Our romantic friends from Symmetry Entertainment are bringing in Canadian indie-pop darlings Stars for a special Valentine’s Day show at the gorgeous Victoria Theatre! And with a discography like theirs, we think this is perfect, super sweet move. We anticipate the set to be filled with tunes from their latest release No One Is Lost — but on an occasion like this, we’re also hoping to sing along to classics like ‘Ageless Beauty’, ‘Calendar Girl’ and ‘Elevator Love Letter’. We have lovely memories from their last two shows in Singapore (at the Esplanade and the Kallang Theatre), and we expect this one to be just as beautifully memorable.

Lately the Darker Than Wax crew have been making major waves as event promoters and as a record label, constantly pushing cutting edge sounds online and across dancefloors all over the world (they’ve recently done shows in Brazil, New York City, Tokyo, Bali, Jakarta and will soon be touring Europe). With a stable of forward thinking core DJs and a large roster of international producers (with Deep Shoq as their latest edition), their momentum is at its peak at the moment, and while the most crews will be keen to push the envelope even further, DTW will be taking its time to look back for a bit with Redux.

The Darker Than Wax ethos was built upon a devotion to decades of soulful music from around the world and as they explain, “Redux is a showcase of the roots sound of Darker Than Wax, including foundational classics, obscure B-sides, and modern tracks channeling the soul of previous eras.” William J (check out his Bandwagon Mix here), Daryl C (check out his Bandwagon Mix here) and RAH will be helming the decks for this one, and they’ll be dishing out soul, funk, boogie, hip-hop, broken beat, Afro, Latin and Southeast Asian jams all night long.

The entire existence of False Plaintiff has been dedicated towards tearstained poetry and impassioned instrumentation. Never mind the constant 'post-hardcore' tag — while the five-piece has their influences on their sleeves, echoing similar musical blueprints laid by La Dispute (who they've opened for) or Touche Amore, False Plaintiff have their sights set on their own territory, and their live shows have been no exception, demanding total immersion. The band recently released Stenographer and will be launching the album alongside Fader, Exhibitors, Seasight and Kuala Lumpur's Transitors.

Funeral For A Friend - Last Chance To Dance Tour - Singapore 2016

Alas, the time has come — your memories of blistering post-hardcore and days of surfing MySpace are becoming more faded and distant than ever. Never mind that 2006 is now 10 years ago. Funeral For A Friend, the OG purveyors of the soundtrack for the angsty and brokenhearted, have called it a day and will be celebrating their career with a worldwide tour. While most of the world will be treated to the band performing their first two albums, Singapore will be getting a healthy mixture of hits and deep cuts for one night only. At this point, it's pointless to be picky, because it'll really be your last chance to dance (or mosh).

Tropos 1.0 Featuring Inspirative, Earthmover, This Is Atlantis and Arajua

Post-rock shows this heavy are pretty rare, and TROPOS — a new series of gigs by music website/post-rock champions ATMOS — aims to make it into a regular institution. Sure, there haven't been as many interesting and exhilarating post-rock music in a while, but the choices are perceptive: Thailand's Inspirative have been on our radar for a while, while Earthmover and This Is Atlantis are favourites of ours. The return of Arajua is welcomed too, so this should be a heck of a night for post-rock fanatics.

Like Rachael Yamagata, it seems Singapore has the thrilling taste of non-thrilling live singer-songwriter music — marking Diana Krall's umpteenth time performing here — but many can attest to Krall's indelible stage presence and flawless performing abilities. With the Wallflower tour, fans will be treated to choice tunes from her entire career, along with her subdued jazzy reinterpretations of popular rock tunes.

Kool And The Gang

With over 50 years as a group under their belt, Kool And The Gang have stood the test of time like few bands have. First beginning in the 1960s as a jazz unit, the group slowly evolved into one of the most influential funk bands of the 1970s, before eventually settling into their contemporary R&B sound in the 1980s (after their breakout hit ‘Celebration’). It's been a long road for Kool And The Gang (with an even longer laundry list of hits) but even after five decades, the outfit are amazingly still in peak form as live performers. We can’t wait to revisit their groovy discography at Marina Bay Sands’ Grand Theatre on 27 February.