Safuan Johari is a busy man, working hard as publicist in the audio-visual collective and music label Syndicate while also producing his own music under the moniker Max Lane. Expanding on the concept of literary-influenced electronic tunes from his last EP The Mim Project, his latest release BRIGHT//SHINE (the sixth offering from the Syndicate label) is a crafty creature, an EP replete with clever synth melodies, surging beats and pounding basslines. The EP also sees him paying homage to Southeast Asian literature, referencing the works of Pramoedya Ananta Toer and Alfian Sa'at as spoken word samples. We catch up with Max Lane as we chat about his EP, his fascination with legendary Javanese writer Pramoedya, and his sonic influences.

Hey Safuan, what have you been up to these days?

After the BRIGHT//SHINE release at the end of April, I did a quick trip up north to play a couple of gigs in Kuala Lumpur. Got invited to play at the second installation of Tekan Tekan (Press Press), which is basically a gig series featuring live electronic acts. The event set-up really made me feel at home as the concept is similar to the Syndicate Subsessions we have here. Plus I had a wonderful opportunity of playing alongside awesome Malaysian electronic acts such as Pradana and Goh Lee Kwang.

Other than that and on the Syndicate front, I’ve been planning & preparing for the upcoming Syndicate Subsessions shows. Can’t wait to see what Pleasantry, Fauxe and Weish have got installed for the June sessions. And on the label end as well, together with Kiat, we are currently scheduling the upcoming Syndicate releases for the rest of the year. So watch out for the drops by Izaak Stern, Vandetta and Gema sometime soon-ish.

Tell us more about your latest release - explain the story behind the title Bright//Shine, as it is quite a dark sounding EP.

The four tracks from this EP were selected from a bunch of tracks I’ve made in the first half of 2011. Yup, it took a while for the eventual release partly due to the label schedule but mainly the hold-up was on my end as I was going through the usual producer’s syndrome of not being satisfied with my mixes. I finally managed to come to terms with it and here they are now immortalized for the world to consume.

Though it still might sound slightly dark, I honestly feel that this selection of songs is the least gloomy bunch I have done (or currently doing) so far; and hence the title. I know they are not exactly chirpy either but the conscious effort to bring the gloom & doom a couple of notches down was due to the fact that I needed slightly ‘happier’ tracks for a nice Mediterranean summer afternoon when I was playing at the 2011 Worldwide Festival in France. I think I did 7-8 songs during that period and these 4 made the cut for the release.

This EP draws a lot from literature and spoken word – tell us about your fascination with that genre.

Other than film, literature is a main source of inspiration I tend to draw from with this Max Lane persona. The pseudonym itself is a homage to an acclaimed Javanese writer, Pramoedya Ananta Toer, as Max Lane (a real person who’s still alive & I’ve met) is the one who translated his key works into English.

Sometimes I would like to think that I’m creating a soundtrack for a passage or text that I’ve read recently. But most of the time though, the inclusion of spoken word samples can be quite an afterthought. Since I can’t sing to save my life, that additional layer of spoken word sample tends to add a significant amount of weight and depth to a track.

Are you familiar with the works of Pramoedya? What is it about his works that made you want to integrate it into your music?

Oh yes, of course. He’s my favourite author and for what he had gone through, definitely one of my heroes. When I found out that he ‘wrote’ the first half of the Buru Quartet as a political prisoner with barely any writing materials and by just reciting it to his prison mates; that totally blew my mind. And when he was eventually allowed writing materials in prison, it was Jean-Paul Sartre who sent him a typewriter. For his works he had also been nominated for the Nobel Prize several times. I can go on and on like a doe-eyed boy for what the late Pramoedya had done. What keeps me going back to his works to fuse with mine, directly or indirectly, I guess is to keep his name alive and pay the due respect for his contributions. 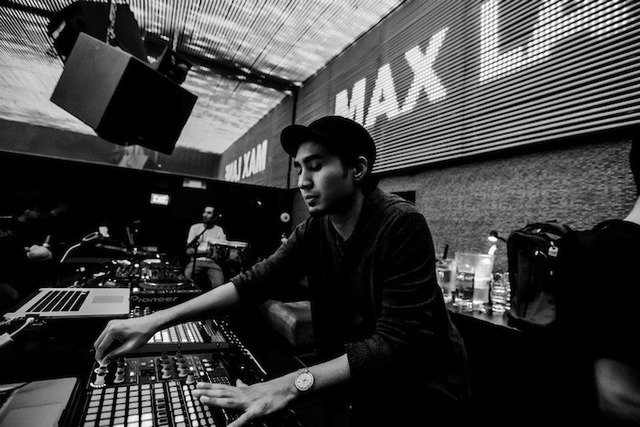 Regarding the inclusion of Alfian Saat's “Singapore You’re Not My Country” and collaborating with left-field icon X’Ho in the track 'Voodoo Martyr' – are you as subversive in your personal ideals?

With my constant thirst to experiment, this will inevitably lead me to being perceived as a subversive character. To what degree this level of political or social subversion goes, I think I will leave the listeners to judge based on my work. Fortunately for me the inclusion of the excerpt from Alfian Saat’s “Singapore You’re Not My Country”, as read by X’Ho in “Voodoo Martyr”, comes in timely as it kind of echoes the sentiments of many Singaporeans at the moment. Not so much of the denouncement for the country as the name suggests but more of questioning the current state of socio-political affair.

What’s in store for Max Lane in the near future?

I’m back in the studio. So let’s wait patiently for the next release.

The man & the album that got me into electronic music. Every single track sounds so nice & simple. For some weird reason this album made me realize how the ‘three-chord’ aesthetics of punk can be applied to electronic music. And Richard D. James started this project when he was 14. Then came another epiphany; I want to do this too.

After discovering Aphex Twin sometime in the late 90s, I inevitably went into a Warp Records frenzy. Till today I’ve never got bored creating as many glitchy beats thanks to this album.

The album that completes my holy trinity (together with the previous two) for the why & what I’m doing musically now. What really stand out in this album are Scott Herren’s sampling techniques and the way he processed and spliced recorded vocals. Plus this got to be my definitive boom-bap album.  Bouncy head-nodding beats brewed to perfection. And again, the least that I could do, is to emulate such aesthetics.

Noises & glitches never sounded so melodic & majestic. I’m a sucker for any concepts that put opposites together. The resulting drama from juxtapositions can be rather seductive on paper but what Christian Fennesz managed to do here is to make it literally sound great.

Even if this comes without the iconic Warhol’s banana cover, it will still be comfort music for me. I will listen to the entire album once every couple of months. As far as I can remember, the first time I heard “Sunday Morning” & “I’ll Be Your Mirror”, I think I was five. My elder brother would play them a lot when I was a kid growing up. So listening to them now brings me back to those days. It’s like reminiscing those Sunday mornings watching The Wonder Years on TV. Personal nostalgia aside, whenever I make music, selfishly I would want the piece to transport me to some other time and place when I listen to it in the future. Just like how this album has that effect on me. On whether the listeners can experience the same thing; I can only try.