The definition of a supergroup is this: a music group whose performers are already famous from having performed individually or in other groups. Think Crosby, Stills & Nash (& Young), think Cream with Eric Clapton, or Broken Social Scene with Leslie Feist, personnel from Metric and Stars and many, many more. And as far as supergroups go, how about one where the member are also from supergroups?

Here's a map we've made to explain some of the links between the members. 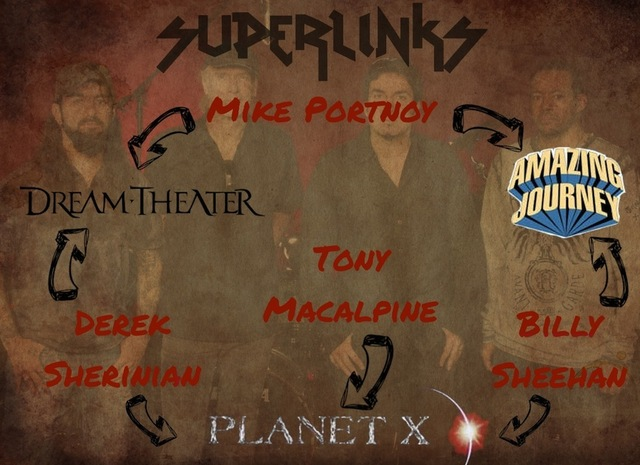 Besides sketchy maps, we also made the effort to chat with Derek Sherinian and Tony MacAlpine of this epic lineup to get a better idea of what to expect when they hit our shores. Hard.

How did this lineup come together?

Derek Sherinian: Mike Portnoy put this line up together to perform at a drum event last year. The response was incredible. It was obvious that we had to take this lineup on tour.

How are you preparing for the tour?

Tony MacAlpine: Well the guys are kinda accomplished players, it’s not like this band needs to sit around and rehearse as much as when we first wrote all these songs. We’ve rehearsed a little bit, like a month ago, and this week and (rambles rehearsal schedules). We do our homework pretty well.

People often refer to this assembly as a ‘Superband’. How do you feel about that?

DS: I would say it’s pretty accurate! This is a pretty heavy duty line-up for sure.

TM: We’ve been friends with each other for so many years so there’s no ‘ego’ of any sort. Everybody’s got a lot of respect for each other. I’ve toured with Mike Portnoy before, and obviously Billy’s played on my very first record and we were in a band called Devil’s Slingshot or something like that and we toured with Steve Vai’s band. And Billy’s wife is very good friends with my fiancée so it’s kinda like a bunch of old friends. Derek and I have been buddies for a long, long time because we’ve been in Planet X forever. We all get along pretty well!

Could you tell us about your early influences?

TM: Early on, I listened to guys like Al Di Meola and stuff like that because I was listening to Return To Forever when I was growing up and I listened to Allan Holdsworth records and Johnny Winter. I was a really big fan of George Benson and things like that, as far as guitar players went. Musically, my exposure is more grounded because I was a classical player, I started when I was 5. So for me music was Stravinsky, Rachmaninoff, Mozart, Beethoven and Chopin. That’s what led me to playing instrumental music because that’s what I did growing up.

DS: I like to warm my hands up before playing, especially with this band.

TM: I’m not a ritualistic person but most of the time I sleep. I have things I like to do when I’m on a tour like spend time on a bus. Usually when time is permitting, I can walk around the different cities. Gotta make a little vacation out of the work that you do! (He really does sightsee quite a bit on tour)

What about your Top 3 tour tips?

DS: Get a lot of sleep, stay healthy, and exercise.

Drugs and music – a myth?

TM: I think it’s safe to say at with my particular beginnings in music, with playing classical music, I would not be a great candidate for being a drug taker. I’m just not one that’s fascinated with an altered mind. I don’t mind a few pints of beer now and then but I’m not a drug person. Well I don’t know what other people do, but yeah, I’m more of a business-as-usual guy.

So what can we expect from the PSMS show in Singapore?

TM: We’re going to be playing some classics from all our music we’ve been involved with together and consequently, all the guys on the stage have been directly or indirectly involved in the completion of that setlist. We’ll be playing stuff by Planet X and Dream Theater, Liquid Tension and some of our solo stuff. When we go with this show, it’s always a lot of fun and people have really enjoyed it. It’s not the kind of lineup that anyone would predict, it’s funny how we’ve never done this before but it’s fun to get together and pull off the music. People can expect a high energy show.

Finally, complete this sentence: A superband is…

TM: In the fan’s eyes, a great analogy would be ‘A Dream Team’ and but a superband would be more of a personality band, where people with personality get in (a band) and they all have quite a back catalog of different material that they’re known for. I don’t think we’ve ever thought of this as a superband! We’re just regular guys, at the end of the day.

DS: A band where every member is a force in their own right.