Mysterious, dark and quietly powerful, instrumental rock quartet This Is Atlantis have amassed quite a cult following both here and in the region. It's easy to see why, considering their live sets have never failed to arrest and enthral audiences with their crushing guitars, aggresively complex drums and heavily atmospheric soundscapes. They're not the type to make much of a ruckus too, as they've been quietly performing in shows here and there in Lithe Paralogue, Home Club and The Substation while recording their long-awaited release.

Fans need not wait any longer for they'll be launching their album Civilizations this very Wednesday at Pink Noize - and they're releasing it on 12" vinyl! In an exclusive chat with the quartet ahead of their album launch, we talk about Greek mythos, their Malaysian following and having a strong DIY ethos.

Hey guys! What have you all been up to these days?

Fadzil: First and foremost, thank you for featuring us. What have we been up to lately? The "daily grind" of course! But at the same time, we are busy preparing for this upcoming release as we speak. Packing the vinyl, doing some logistics for our mini tour over in Malaysia and of course, hitting the studio for practice.

Wan G: Making more songs! We love to be productive and can't keep our asses still. And yes, finishing up last minute chores for the vinyl.

Tell us more about your upcoming release Civilizations.

F: Civilizations consists of five songs and this release sees us heading onto a slightly different approach compared to our earlier record. We simply want to try out new sounds, and constantly pushing our mental and writing capabilities as a band.

S: True. Also, it didn't occur to us to have a fixed planning or writing stage. We just kept writing and writing and then throwing it all together at TNT Studio, and crazy-ass Ah Boy settled the rest. We certainly received mixed feedbacks regarding our huge leap from the previous direction to what we sound now. It's a much groovier affair in this record. It is any bands' journey musically, really. You either chose to sound the same or progressively different every album. I prefer the latter.

You’ve really built up a prolonged period of anticipation for this release – it seems like we’ve been waiting for a very long time! Why did it take that long, and what were the challenges you faced throughout the recording period?

W: The journey of putting out this LP has been exciting but very mentally exhausting too, from the choices made in recording, to mixing and mastering. Surprisingly, the recording process went smoothly though we met with series of challenges in between.

We handled it pretty well but sometimes what appears as a "smooth plan" doesn't turn out all good at times. It took us almost 8 whole months to finalise everything before sending our songs to the plant for pressing, which unexpectedly experienced another technical complications, again prolonging the process. No doubt it killed all our excitement and anticipation to when this record will ever see the light of day. But when we least expected it, it was magically ready and sitting on our doorstep. In total, the whole process took around 15 months!

S: Yes. Come to think of it, I thought it was pretty hilarious and the timing was uncanny with the chain of unfortunate events. I think it happened to the previous releases as well but by far this was the most nail biting! I believe it was because of it all that we learn to manage the curveballs that came our way and stay collected every time... though we did panic at certain points! But Epidemic Records has given us a mighty amount of support too.

It’s interesting that you’re putting the album out on 12” LP – what made you decide on the vinyl format? Are you all avid collectors of vinyl?

F: We are not really avid or hardcore collectors of vinyl but we do have our own collection. We just felt that exploring different formats was a great idea! Our very first release back in 2010 was the split with the great NAZARK, and that was in a CD format. When we released our split EP with Malaysian heavyweights Daighila in 2012, Epidemic suggested that we put it out on 7" vinyl. We thought the idea was quite exciting and of course we agreed! We were very happy with how it turned out and I must say that it adds a certain depth to the sound. So that naturally bolstered our decision to releasing Civilizations on 12" vinyl, confident that it will be another fulfilling venture with Epidemic. We are still open to the idea of exploring our future releases in different formats.

W: The folks at Epidemic have been fans of collecting vinyl before the "vinyl revival", so you can see the need of them wanting to put this album out on vinyl. They've got a rad room of records and everything music-related! 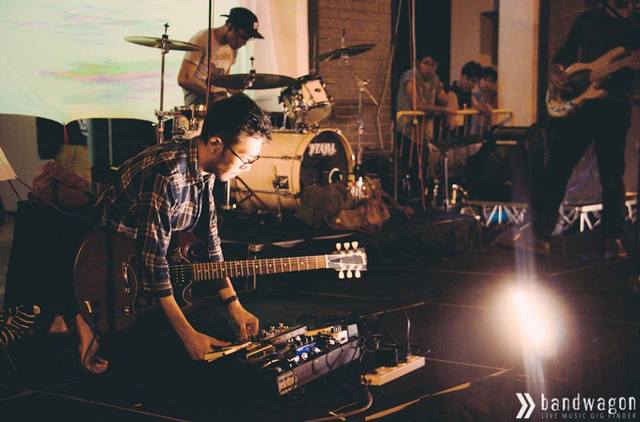 You guys have a huge following in Malaysia! How did this happen? What’s the difference between playing shows here and shows in Malaysia?

N: Music really transcends borders. It really connects the causeway divide. We already had a few friends across the causeway but it was a humbling experience having more and more invitations to play there and also gaining new friends, followers, and fans. Also, social media and Facebook have been a platform for us and all the bands out there to reach out to music enthusiasts regionally and even worldwide.

F: I guess you can't really compare between playing here in our homeland and playing over in Malaysia. From all the shows we've played, we have never had a dull moment. We always have fun at our shows, talking to people - be it friends or people we're getting to know the first time, and I guess that's the same thing when we play in Malaysia. It's just that when we play in Malaysia we also think of it as a small getaway.

You guys have been strongly DIY from the start, how important is it to adopt the DIY attitude as musicians in Singapore?

F: We grew up exposing ourselves to DIY gigs back in the day watching memorable bands like Secret Seven and My Precious just to name a few, and my personal view is; it doesn't matter whether you are DIY or not. We were lucky enough to get our first few shows through people from the DIY scene and it all started from there. Some of these guys are our friends and they were kind enough to approach us to play for their shows. Up till now we still play in these shows!

Thing is, as a band you can't be picky on what kind of shows you want to play, whether you play earlier slots at a show and worrying that no people will turn up to your set, or overthinking about playing in big shows knowing that a lot of people will come, or being too picky about equipment for gig or show that you are going to play - just get out there and play and the more you play the more exposure you will get and eventually people will know about your band. It doesn't matter who the crowd are or whether they dig your music or not. We have played to crowds of only 3 or 4 people and crowds that consists of punk, metalheads and people who don't know who we are. We've also been featured in all DIY zines. Till this day we have no regrets. In fact, we are grateful.

W: If you are passionate in the things you are doing - doesn't matter if it's the arts or music and there is no other sources or means for support - you will take things in your own hands. From your records and aesthetics, to your merchandise and shows, you will feel satisfied at the end of the day from the outcome. You can't always expect that there will be hands reaching out to you, so do it your way.

Even though we have Epidemic as our backbone, Epidemic adopts the DIY approach strongly, and we are definitely grateful and blessed to be working with them, and the small collective of bands and friends feel like family.

What’s next for This Is Atlantis?

N: We are currently making more new songs and hopefully will be hitting the studio again soon.

W: Adding to what Noor said, we might be planning for a tour outside Malaysia. Indonesia is one of the places we are raring to tour and of course, Japan will be another place we would love to go.

F: We will definitely try our best in making all plans and contacts possible for us. Nothing is certain yet but these are just tentative goals and to be able to achieve all these will be a blessing on our side.

W: We have different tastes and influences in music, and when we come together, we don't even know what will be on the table. It's a collaboration of ideas and playing styles. As all of us have diverse views and preferences, there really isn't any particular from an artist/band that influences all of us. But for me, the album that influenced me is Tool's Lateralus. All their albums are great, but what set this apart from all their other albums is that Lateralus is well thought out in concept and the flow of one song to the other makes the album a journey to listen. The playing is sublime and the songwriting is first class.

F: The band Daughters have influenced me a lot. I like the sonic dissonance coming out from their music. The final self titled album that they put out before they disbanded was my favourite although structurally their songs were less technical than it used to be, but it was all in the sonic assault.

These Arms Are Snakes | Tail Swallower And Dove

Minus The Bear | Menos El Oso

This is a band that kept on fine-tuning their sound more than David Beckham changed his hairstyle. For fans who have followed them since their Drive Through Records days, you'll know that this band continues to push their creative boundaries to their limits.