Going to a gig is synonymous with taking phone photos because obviously we all want to remember the gigs we attended (and also to show off to our friends), not all of us have DSLRs and it is our responsibility to honor the age old adage that is 'PICS OR IT DIDN'T HAPPEN'. So instead of letting these pictures become a graveyard of memories on our phones and gadgets, we held a photo contest to celebrate these moments. Here are the winners of the cameraphone contest we held last year who walked away with classy Moleskine Music Journals and were more than willing to share the memories of the gig they went to! 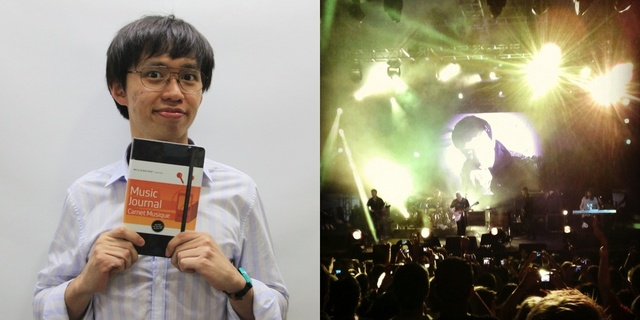 New Order is of course one of the seminal bands of our era, and I’m a big fan after I got acquainted with all the songs on Singles. However, when it was announced they were to land in Singapore for a gig, I wasn’t particularly excited as the band is now missing their original bassist Peter Hook and my perception of them was seniors trying to milk the New Order name. But that changed after a night out at Poptart, the monthly indie disco night at Zouk run by Adrian Wee, when he dropped a cover of 'True Faith' by The Wombats. The song was so beautiful and in that party-high, the epiphany struck me - “I HAVE TO GO FOR THIS!”

The gig was filled with many people who looked near 40 and proudly wearing their New Order/Joy Division t-shirts so I was relatively young (I’m 25). We cheered when Bernard Sumner and crew took to the stage to the sounds of 'Elegia'. They opened the set with 'Crystal', followed by 'Regret' – a favourite in local indie disco nights. Though in his 50s, Sumner’s voice sounded as youthful as ever. They dropped all the crowd faves including 'Here to Stay' and 'Bizarre Love Triangle', where Bernie, free from guitar duties, did a freestyle jig while singing. And as if 'True Faith' wasn’t epic enough, the live version was an improvised, extended one.

All the visuals that accompanied the songs were stunning; sometimes video footage from their music videos, others fit-inducing psychedelia. But none prepared me for the last song of the night, their cover of 'Love Will Tear Us Apart'. The late Ian Curtis took over the screen, followed by the text “Forever Joy Division”. The poignant tribute was a fitting emotional climax to a great gig. 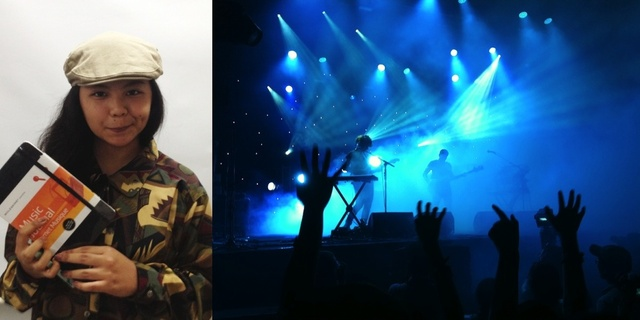 M83 puts Laneway Festival 2012 to a close as it made its last stop here in our Singaporean shores and it was nothing less than spectacular. From its stunning visuals to their distinctive sound that resonated throughout Fort Canning, it was the perfect end to an incredible day.

After a full day of basking under the glorious sun and soaking up the good music, M83 made sure that they were worth the grand finale. They played songs old and new, including 'Midnight City' which was an obvious crowd’s favourite as everyone hummed along. All of us put our hands in the air together with Frontman Anthony Gonzalez. I still remember looking back and seeing a sea of individuals, illuminated by the blue stage lights, coming together and swaying their hands the same way. If you are having problems trying to imagine how it looks like, just picture about 8000 synchronised swimmers swimming in space. (That might be harder to visualise, but you get what I mean)

Lights of every colour pieced the epic performance together. It brought about a dreamy atmosphere special to M83. Emotions were set at all time high when they came back out for an encore. Named after a spiral galaxy, their set was truly out of this world. It was unforgettable.

We all go to music festivals for the experience, whether it’s for catching your favourite bands all in a day, to spend on really overpriced food and drinks or to get one of those ridiculous tan lines. Everyone takes something different away from it. M83’s amazing piece was definitely one I brought back home with me. Another would be… having a girl sniff my hair and tell the world I smelled good. Hah, c’est la vie. 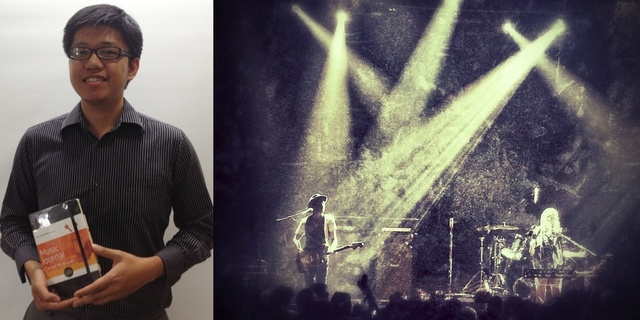 Metric is one of those bands I thought I'd only get a chance to watch live through some serendipitous alignment of fates but... oh wait, maybe this was my lucky year! There was a surplus of chairs at the venue (not really my first choice for a ROCK concert) but Metric made it a moot point as they filled the air with an electric energy that made every single fan jump up and mosh. Metric was transcendent in their first live performance here in Asia. I loved every single minute and every song, from the new singles like 'Synthetica' and 'Youth Without Youth', to the old favourites we're only hearing for the first time here, 'Dead Disco' and 'Help I'm Alive'. As with every great performance, after the final few soul-stirring notes of their final encore song 'Gimme Sympathy' had faded and the band had left the stage, I kept wishing for a second encore, and a third. And a fourth. Let the night never end.

It was truly an amazing, memorable experience. 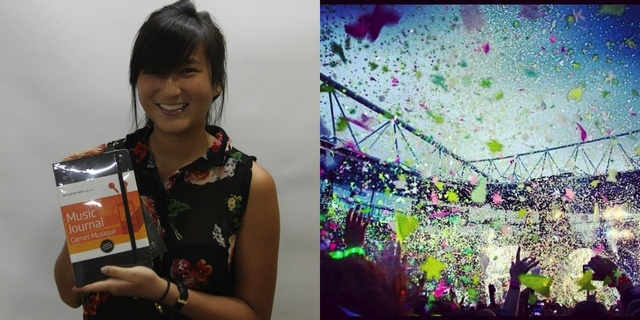 At 3pm in the afternoon, throngs of Coldplay fans had already arrived at the majestic Emirates Stadium, home to Arsenal Football Club. It seems ‘kiasu’ is a term not only synonymous with Singaporeans. Alas, I was too late to secure a spot smack in front and feelings of excitement ebbed away. The gates opened around 5pm, just as overcast skies threatened to dampen my spirits once more. I was so excited about watching Coldplay that I forgot about opening acts, so it was a welcome surprise to see Robyn and Rita Ora on stage. Quarter to nine, was the magic hour.

‘Mylo Xyloto/Hurts like Heaven’ reverberated across the Emirates, our LED wristbands flashing wildly, an eruption of screams and applauses; the sky was at least 50 darker shades of grey and we were packed like sardines but we didn’t care. Emirates was such a beautiful sight; a sea of twinkling neon stars. It was magic. Next on the setlist was ‘In My Place’, and it did not fall short of magic. The LED wristbands were just the prelude. A few loud explosions and bursts of neon confetti engulfed the whole stadium in colour and song. That’s when I stole this shot (and some confetti butterflies and birds). These set the tone for the remainder of the concert. Though the skies gave in and the downpour began (somewhere between 'Princess of China' and 'Up in Flames'), nobody seemed to care, caught in the fever of lights and music.

The downside of being such a famous band is losing a personal connection with the audience in such a huge stadium. In spite of that, these four humble lads have made it so that every person plays a part in this magical spectacle. I was considerably far off from the main stage and the crowd obstructed my view of the band. But when I looked around me, all of us were strangers singing in tune with Chris Martin, our LED wristbands flashing in time with the songs. A curious sense of community.

“When the lights go down, that’s 30,000 peoples’ lives colliding. Everyone there working is working for that moment, everyone watching is watching for that moment. It’s when you’re all in agreement about what you’re doing so it’s a wonderful feeling of togetherness and possibility,” [Chris Martin]

Seven hours at Emirates and it hurt like heaven. 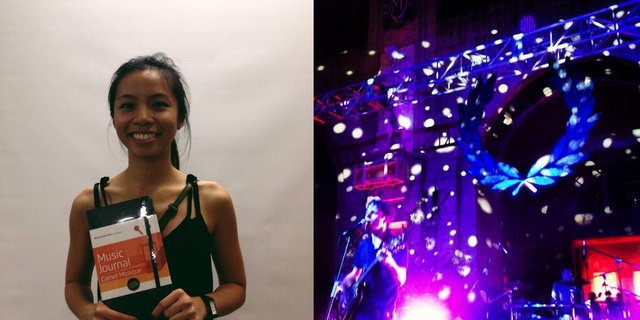 Brought in by Fred Perry as a highlight to their 60th anniversary party, CITIZENS! was held at the now defunct Tanjong Pagar Railway Station. The atypical outdoors venue was apt for a band that is less well-known but not less-loved.

Fans amassed at the feet of frontman Tom Burke, as he crooned and rocked and everyone danced and sang along. The scene was set with colourful spotlights that bounced off a light drizzle, and the pulse of the city was encapsulated in the lights of passing vehicles cruising on the flyover above and the open sky beyond. As if it was living and breathing, wanting to be where the party's at.

Having only one LP to boast about, CITIZENS! faithfully delivered almost all of their songs. Perhaps it was mischief, perhaps it was collective insanity, but by 'She Said', Tom Burke got climbing onto a scaffolding. Perched up there just like a superstar, he had hands reaching up to him from all around. Everybody wanted a piece of the golden boy. By the encore, the crowd was euphoric. As 'True Romance' came on, the energy of the crowd burst as confetti was being shot into the night like magic from a fairy godmother’s wand. It was pure delight to see the surprise on CITIZENS!’ faces.

The gig closed with some of us being able to meet the band backstage, after they had kept their gear themselves. Being unpretentious pleasant English blokes, they joked and chatted and gave their time to their fans, before being chaperoned away. Thereafter, the night was dark and quiet as CITIZENS! was the star that shone the brightest.