We spent three whole days at the scene, running between stages, planning out 'Who To Watch' lists everyday, being nice to people and making friends, making new music discoveries - a tiring weekend nonetheless but despite hitching the Night Rider everyday over the weekend, Baybeats 2013 was one hell of a festival. New bands, good old ones, side projects and the sorts, we've come up with a report on who we saw over the weekend. In alphabetical order! With a selection of visual assortment. 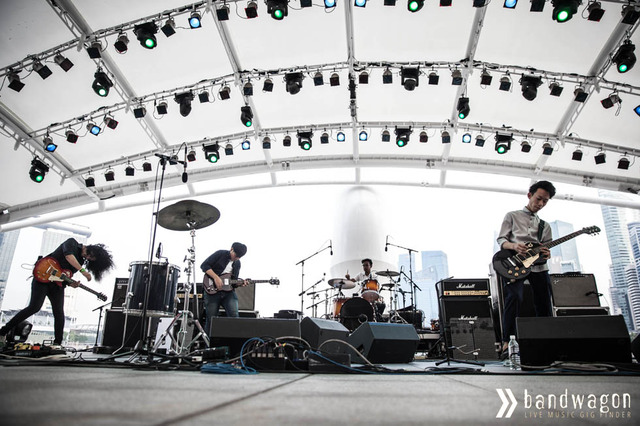 Intro please: One of the 7 bands that made it from the auditions for Baybeats, post-rock represent.

Heartfelt: With the backdrop and breeze coming in, everything was very cinematic and emotive.

I've Just Seen a Face: Keith the guitarist was all hair the entire time. 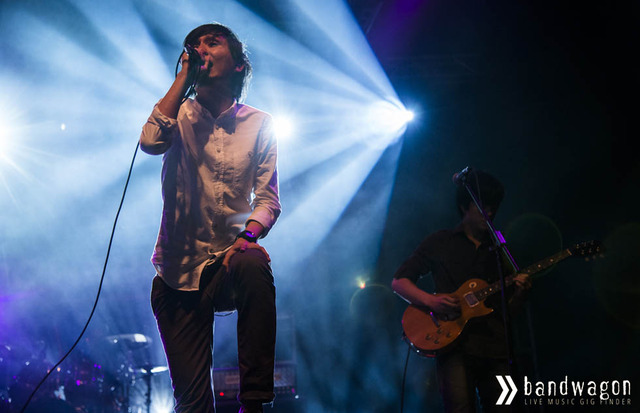 Job done: You know you've reached rockstar levels when you've got the crowd shouting your name before you start.

Award: Joshua deserves an award for how hard he swings around with his guitar.

For old times: Enjoyable set, everyone sang their hearts out.

Enjoy yourself(ie): Best and most populated selfie ever. See for yourself. 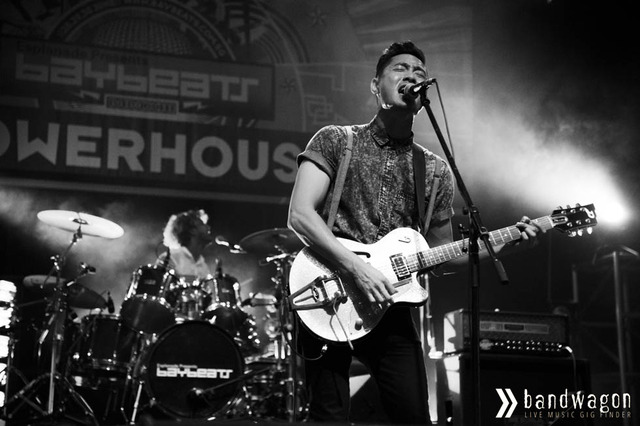 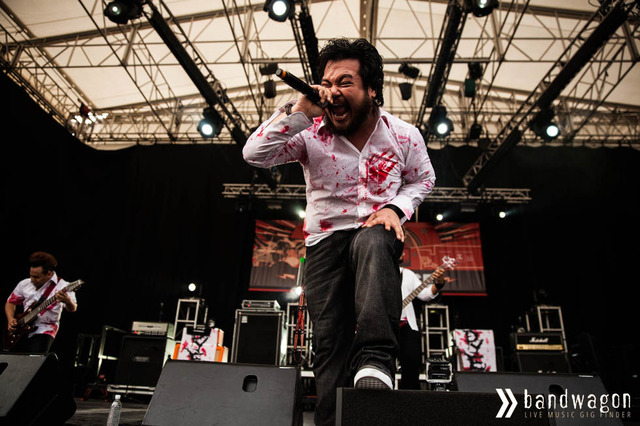 Gripe: Set was too early and people were still too shy to mosh. Still, never too early for death grind. 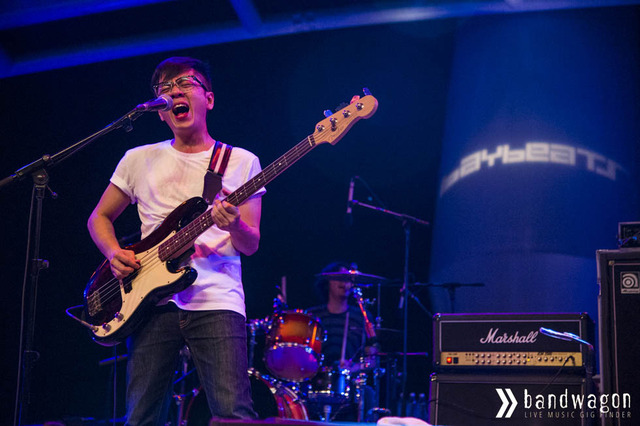 Welcome back!: 'Love In A New Wave' undoubted crowd favourite. Recognisable within the first 2 seconds.

Still got it: Plus points for groovy basslines.

Special guest: Guitarist from Nothing To Declare (JP) joined in. They used to session together, cool fact.

Personnel recommendation: Add a keyboardist! Clarence thinks he can help. 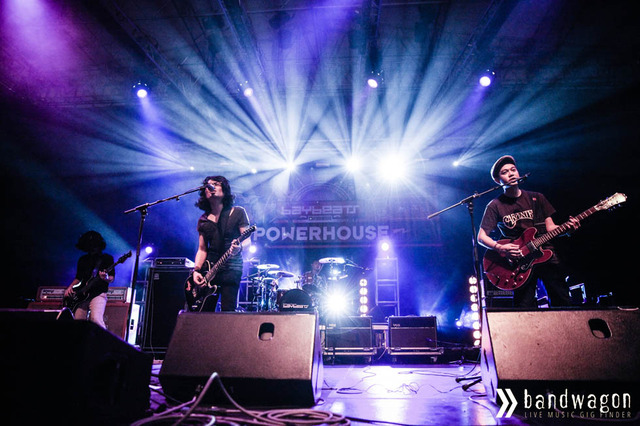 Not giving up: We're not letting them leave the stage until they perform 'Siti'!

Who was there: ABSOLUTELY EVERYONE. 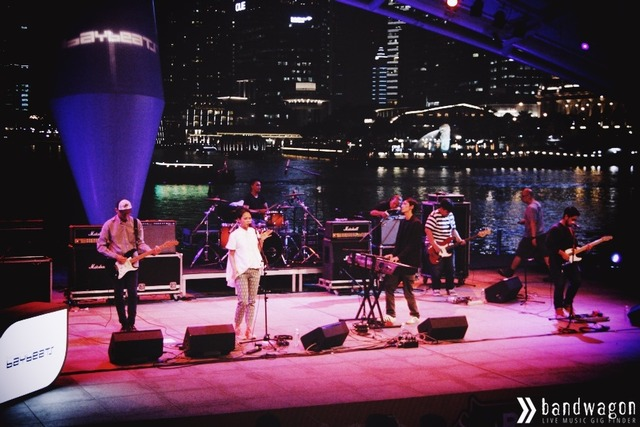 Vibes: A bit of funk, a lot of soul, some disco, throw in new wave. Man, so vibey aka dancey.

Cool sound sampling: Sampled 'One Way Or Another' by Blondie in one of their songs. Also, only band where the bad feedback glitch was working to their advantage. 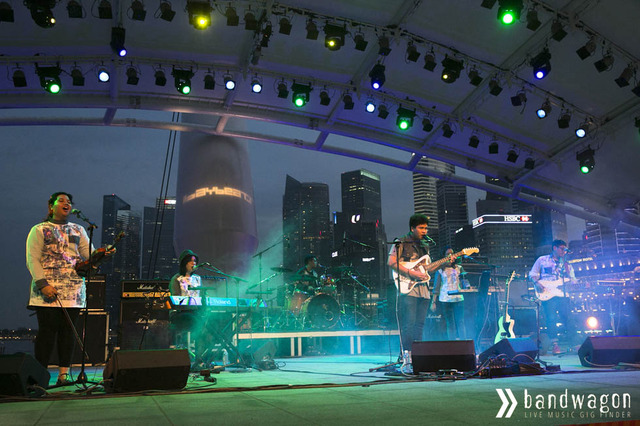 Vibes: Whimsical, dreamy, music to ponder life to on a Sunday evening.

#deep: "Imagination will set you free from the prison of your agony." - 'Reverie'

Best of both worlds: Only band to play indoors and outdoors, and they played two really good sets. 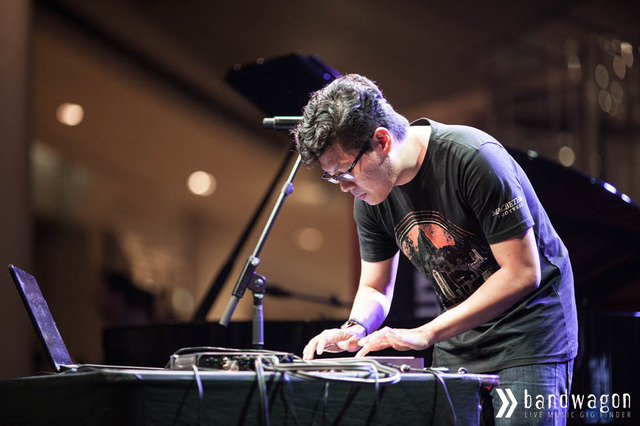 Art show: Trippy visuals that sat well with the music. 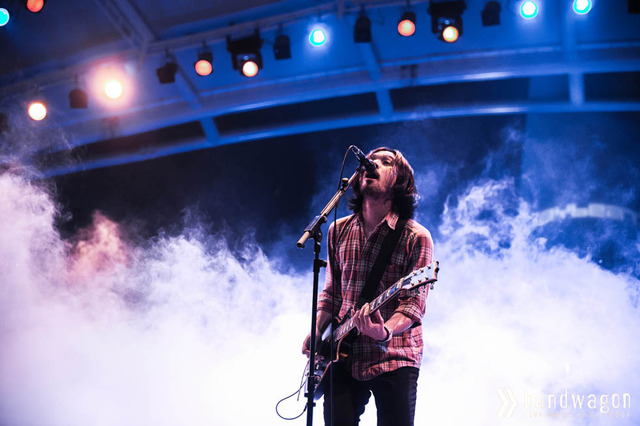 Nothing To Declare (JP)

Proof: Guitarist Yoshi's strap snapped and had to be replaced during the set

Ice-breaking games: To kill time, Mas recited from memory the names of local bands. "Anyone knows ______?" 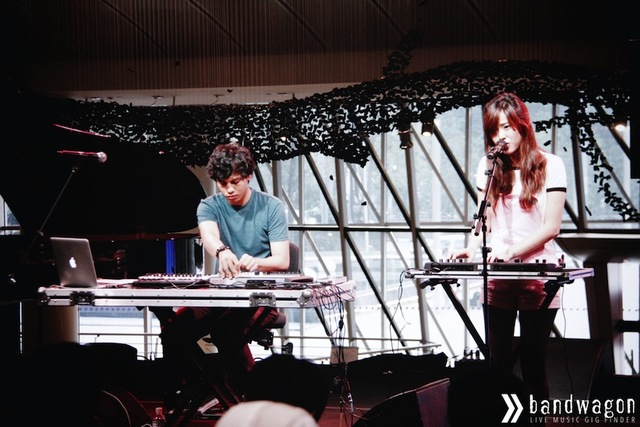 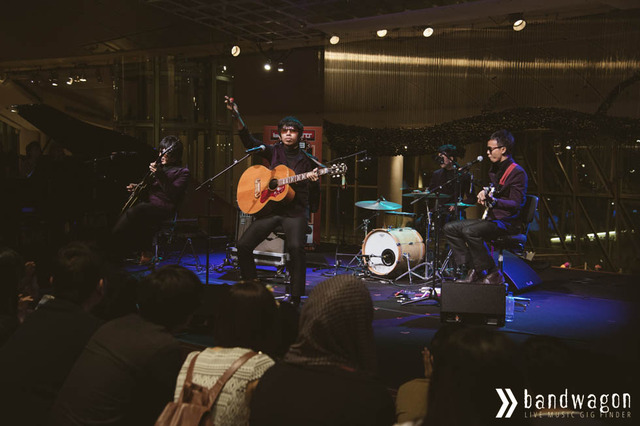 Favourite line of all time: "My life has been so wonderful and miracle."

Surprises: Covered 'Lithium' by Nirvana and even as fans, we only realised halfway through the song. 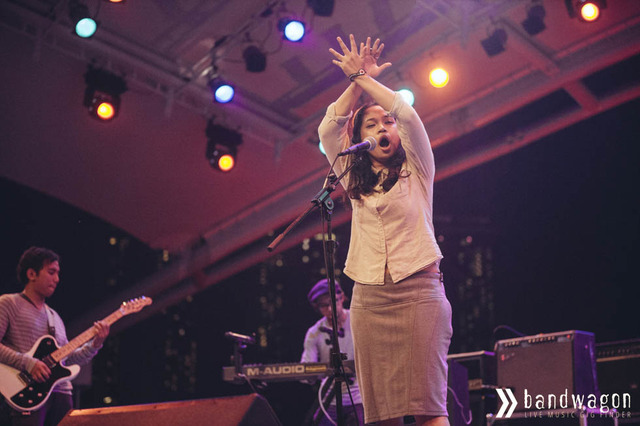 This guy is impressed: The band were really on form. Highlight of the entire Baybeats, in my opinion.

Between Two Lungs: Frontwoman Suhaili was exceptional with her wide vocal range and divine stage presence.

Validation: After a song mid-set, we could hear Gurmit Singh from the NDP rehearsal not far away say "excellent job" over the Marina Bay Platform sound system. Couple that with fireworks that appeared throughout the set, safe to say Singapore approves of the Psalms. 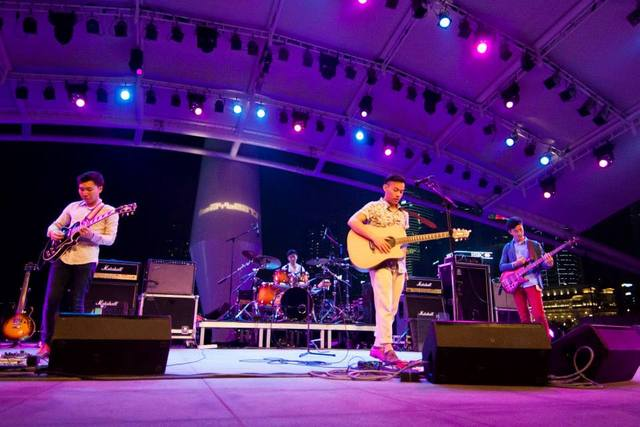 Easy Like Saturday Evening: Even on a post-Wormrot high, we were lulled into the bluesy and mellow rock vibes of The Sets Band.

Plug: Have you got your Sets Band merch yet? It's lovely. 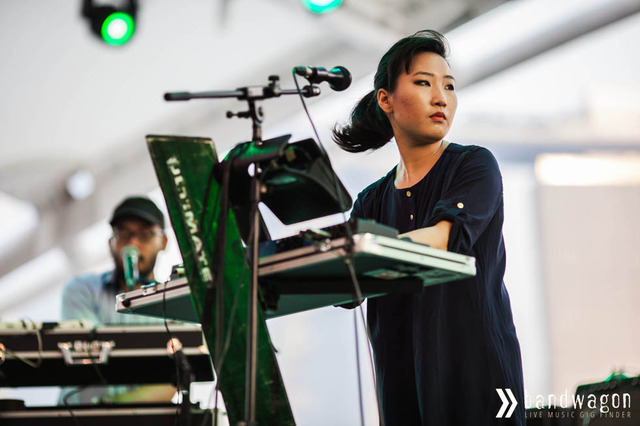 Sound sample: Mathy/proggy alt-rock with tight musicianship and an off-kilter sense of melody.

Keeping tabs: At parts abrasive, atmospheric and even catchy, we can't wait to see what sub:shaman has next.

Props: Jets and speedboats were back (see Baybeats 2012 report). Gunfire sat in surprisingly well with the music. (okay not really but it was still cool) 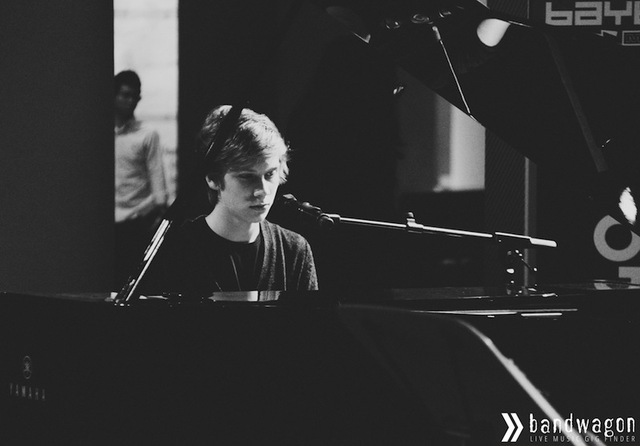 Who: A 14-year-old musician that made us re-evaluate what we did at his age (I spent most of my time designing video game covers on Photoshop. That's something...right?).

Full band: The presence of other musicians, especially the addition of string players, helped form a fuller sound live.

Godspeed: Chris Jones is definitely maturing into a potent singer-songwriter with a potentially successful future. 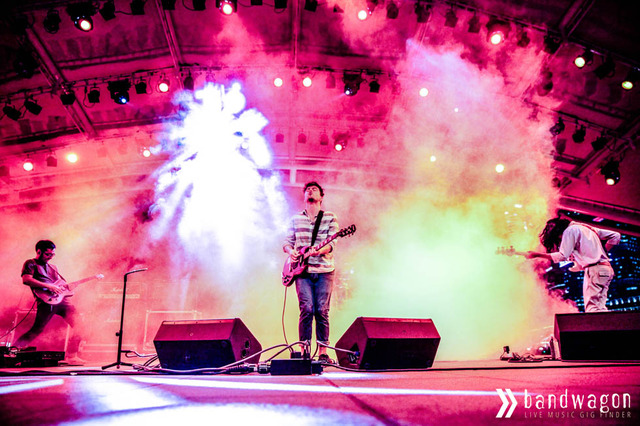 Soundscapes: Post-rock, with some vocals, some Explosions In The Sky vibes

The United Nations: One is Japanese, one is Irish, the other two are Thai. 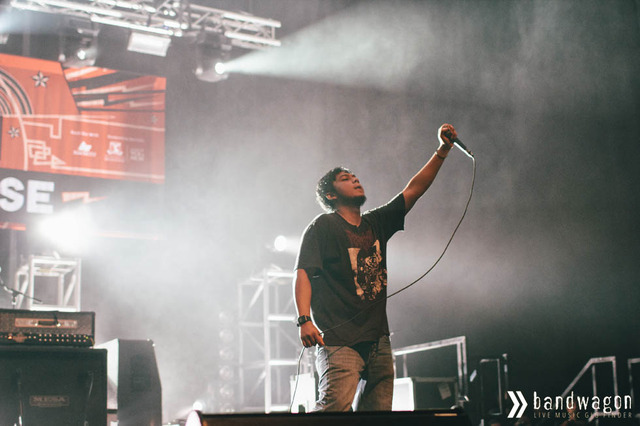 Solidarity: Insane moshpit. Everyone jumped in.

Encore: "F*ck it, we're gonna play 2 songs since our songs are short anyway" frontman Arif says after the crowd chanted for one more song.

We found love at a grindcore gig: A PROPOSAL. "Tak grindcore langsung." (This is so not grindcore at all) 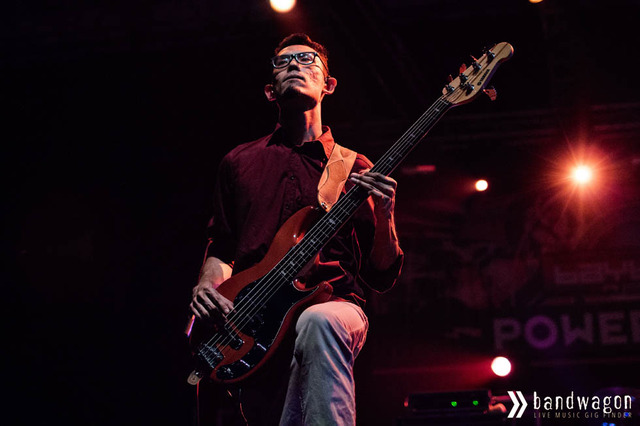 Youth of Gold: You could almost smell the teen spirit (hurhur). Drummer was especially tight.