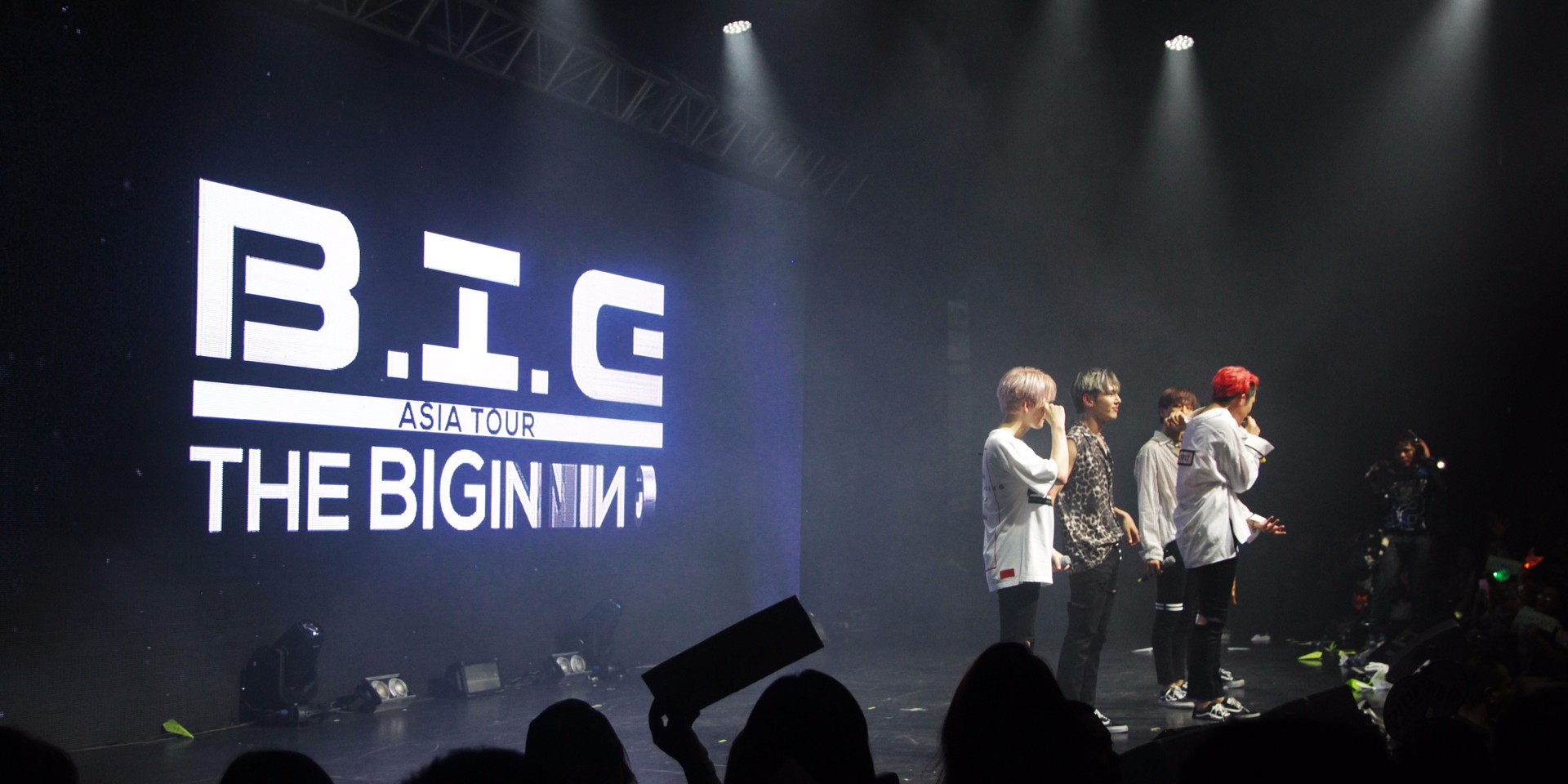 It was a rainy afternoon in Metro Manila, but the weather doesn’t matter for any fan anticipating to watch their favorite artist live. Music Museum was packed with fans of Korean boy group, B.I.G. (Boys In Groove). They were carrying banners, fans, and other items to give away to attendees of the concert. A couple of ladies gave us some fans that had photos of Gunmin, Heedo, and J-Hoon. Later on, we discovered that these were made by a couple of Korean fansites as a little project in Manila.

While guests were finding their way inside the venue for their seats, B.I.G.’s videos were being played on the big screen. Some girls were also giving hand signals to each other and waving their fans to see their friends from other sections. As the lights began to dim, the boys walked in to perform ‘Hello’ and ‘Aphrodite’. After greeting the crowd, the staff suddenly rolled out a white board full of Post-It notes with various questions from their fans. 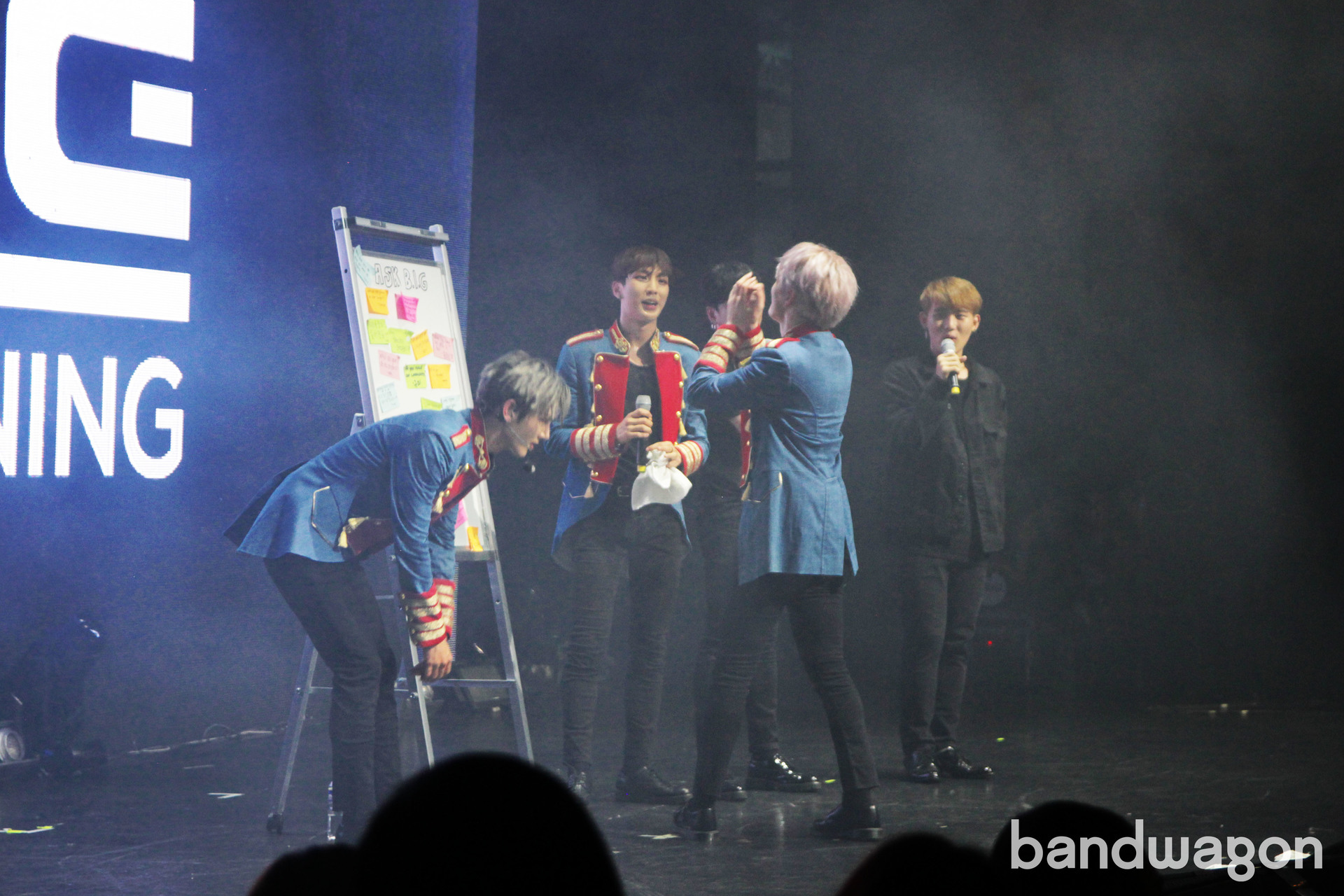 J-Hoon also mentioned, during the Q&A portion of the fanmeeting event, a story about Benji having a friend from Jollibee so they had more food delivered. It was an adorable exchange among the members as their translator juggled with entertaining the crowd and keeping the boys together on stage. After a couple of minutes, their translator asked the crowd if they noticed a missing member. Benji suddenly entered the stage alone with his violin, accompanied by a theatrical entrance video at the background. 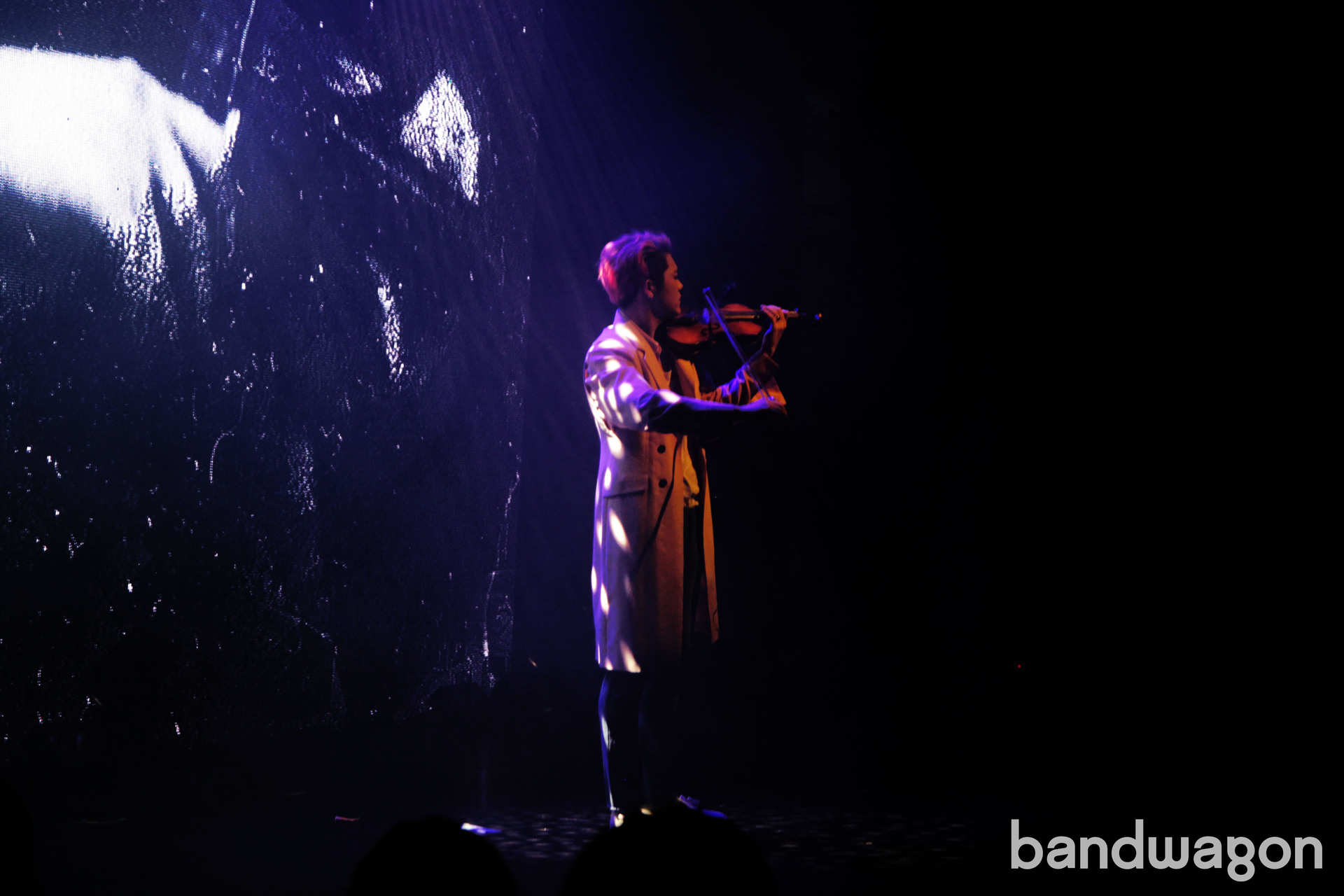 Benji showcased a dramatic and breathtaking violin solo on stage. He broke hearts with the soft rhythm and tune he played. The story behind it roots from his passion to pursue his career in music that’s why it was encapsulated into a sad but soothing song. After Benji’s solo stage, J-Hoon and Gunmin entered to complete B.I.G.’s vocal unit as they performed a cover of Justin Bieber’s ‘Love Yourself.’ While they began belting out another ballad, paper airplanes began to fly from the crowd. 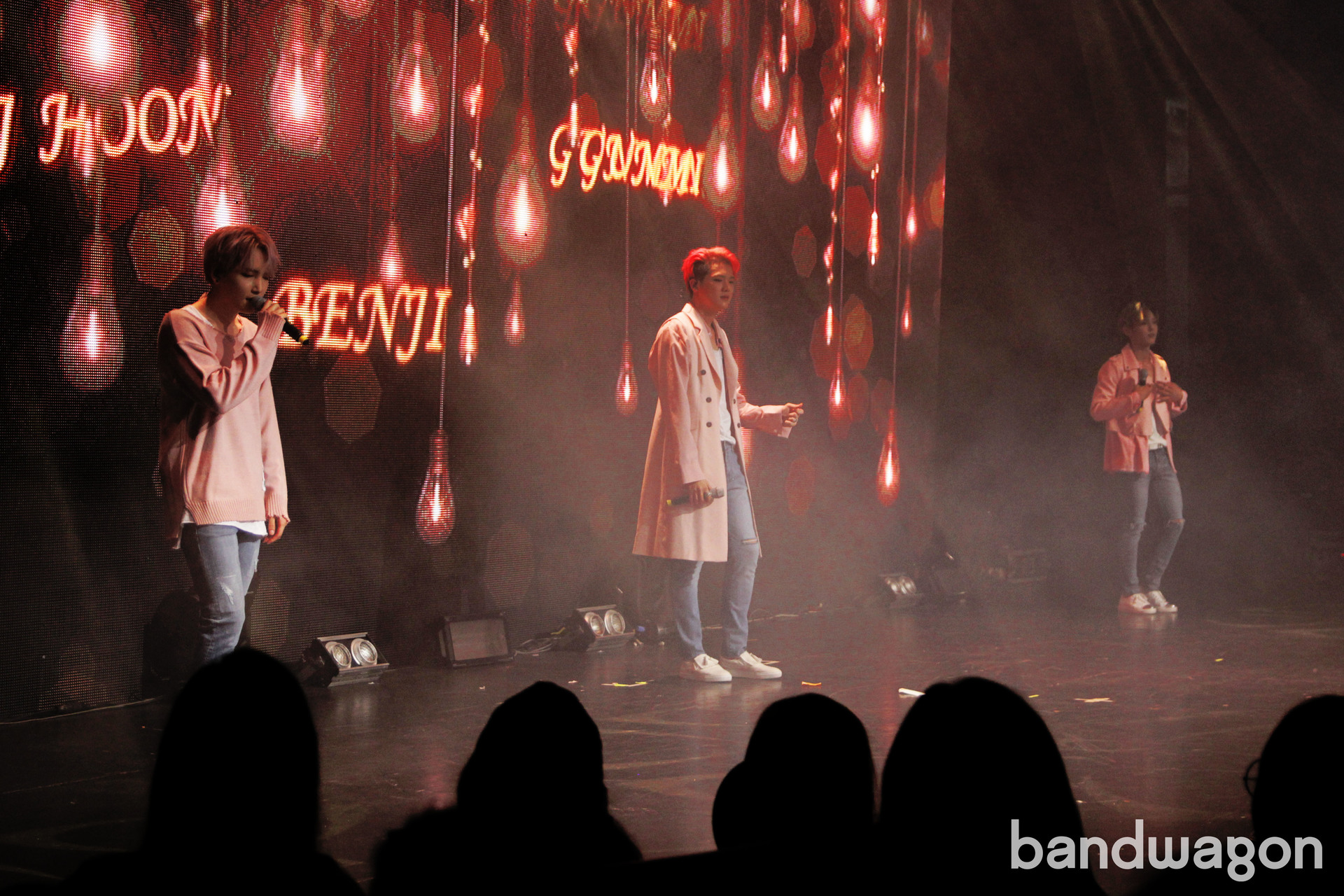 Each paper plane had a message written for B.I.G. Benji even managed to sneak one to keep in his pocket! He shared that “Love Yourself is a song everyone knows” that’s why they decided to cover it during their fanmeeting event. As the crowd began to set their feelings back inside, Heedo and Minpyo stepped up on stage for a rap unit performance. They showcased their charisma as they belted out quick fire verses while approaching their fans at the front row of the crowd.

The boys even prepared special videos to share to their energetic BIGinnings. It was a short clip where all the members rounded up to provide dating tips for their maknae, Heedo. Full of wit and charm, the boys wooed away all their fans by prepping up their pretty rapstar. They suddenly came back on stage to perform more songs, one of which is ‘Are You Ready?’. The track is a perfect party starter, it was no wonder why the crowd was hyped to hear it. 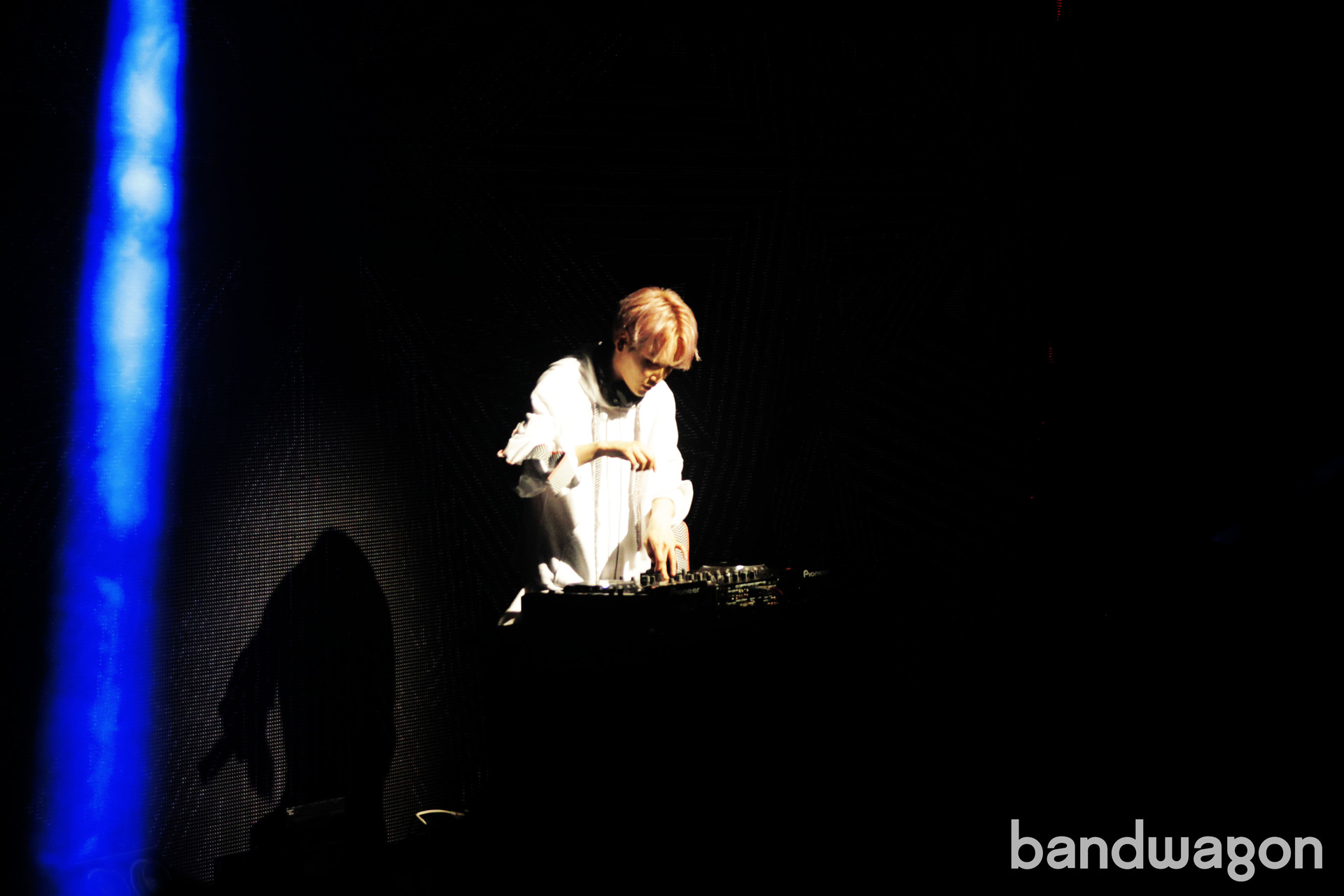 Their staff began to set up a disc jockey booth at the middle of the stage. J-Hoon walked back to the stage and went to the booth while wearing a pair of large headphones. He started to scratch the discs and press certain buttons. He encouraged all the people from the crowd to stand from their seats as he played a full DJ set with upbeat tunes like Bruno Mars’ ‘Uptown Funk’ and Chris Brown’s ‘Yeah 3x.’ The other members even went on stage with dance performances to accompany some tracks. 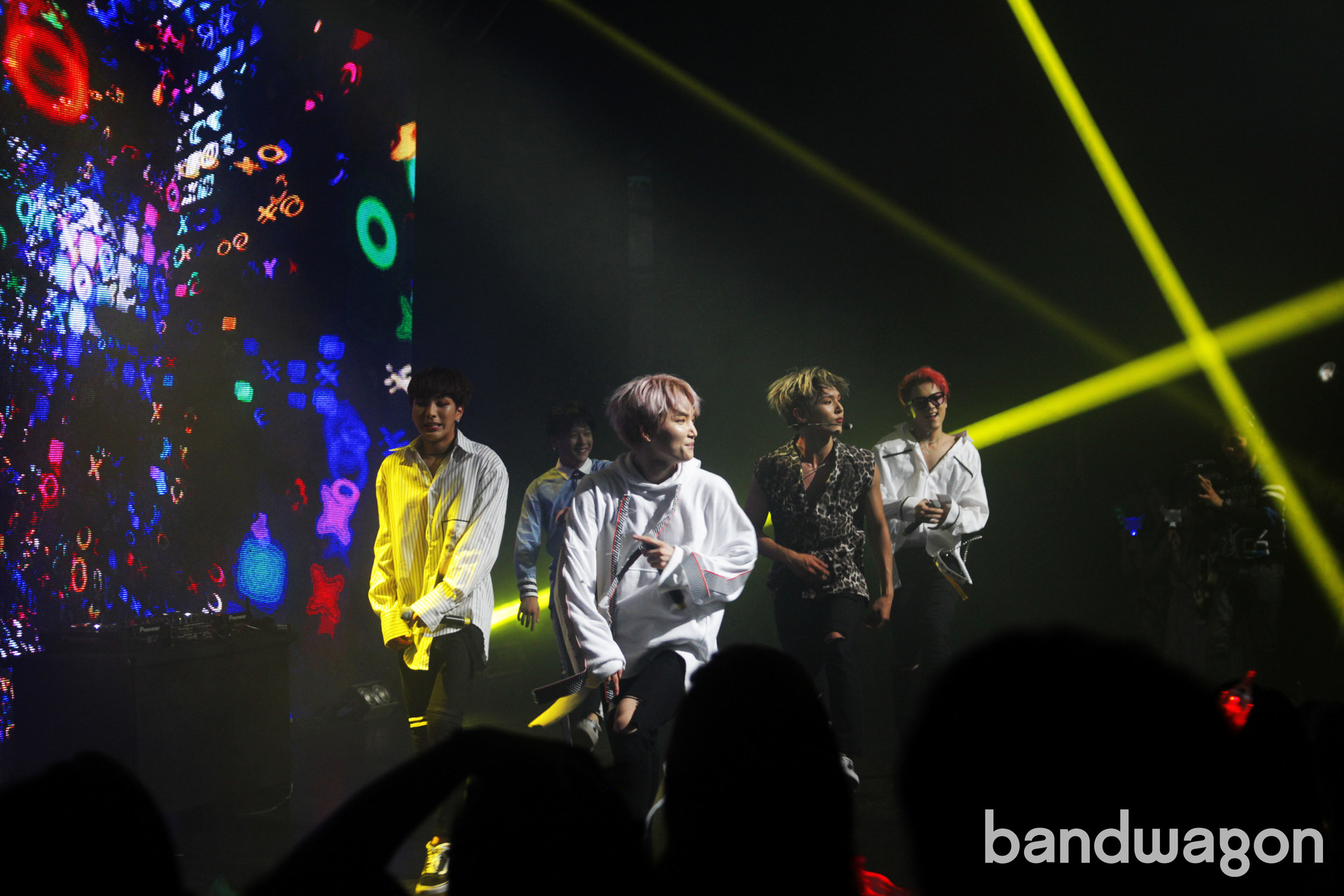 As the crowd started to calm down, the boys showcased another special video they prepared. They talked about their struggle as a group as each member shared how they felt more complete in fulfilled in B.I.G. To thank their fans, they even prepared a special dance performance. They dominated the stage with a flawless choreography as they grooved to the beat of pop songs like Nelly and Fergie’s ‘Where My People At’ and Chris Brown’s ‘Wet The Bed.’ 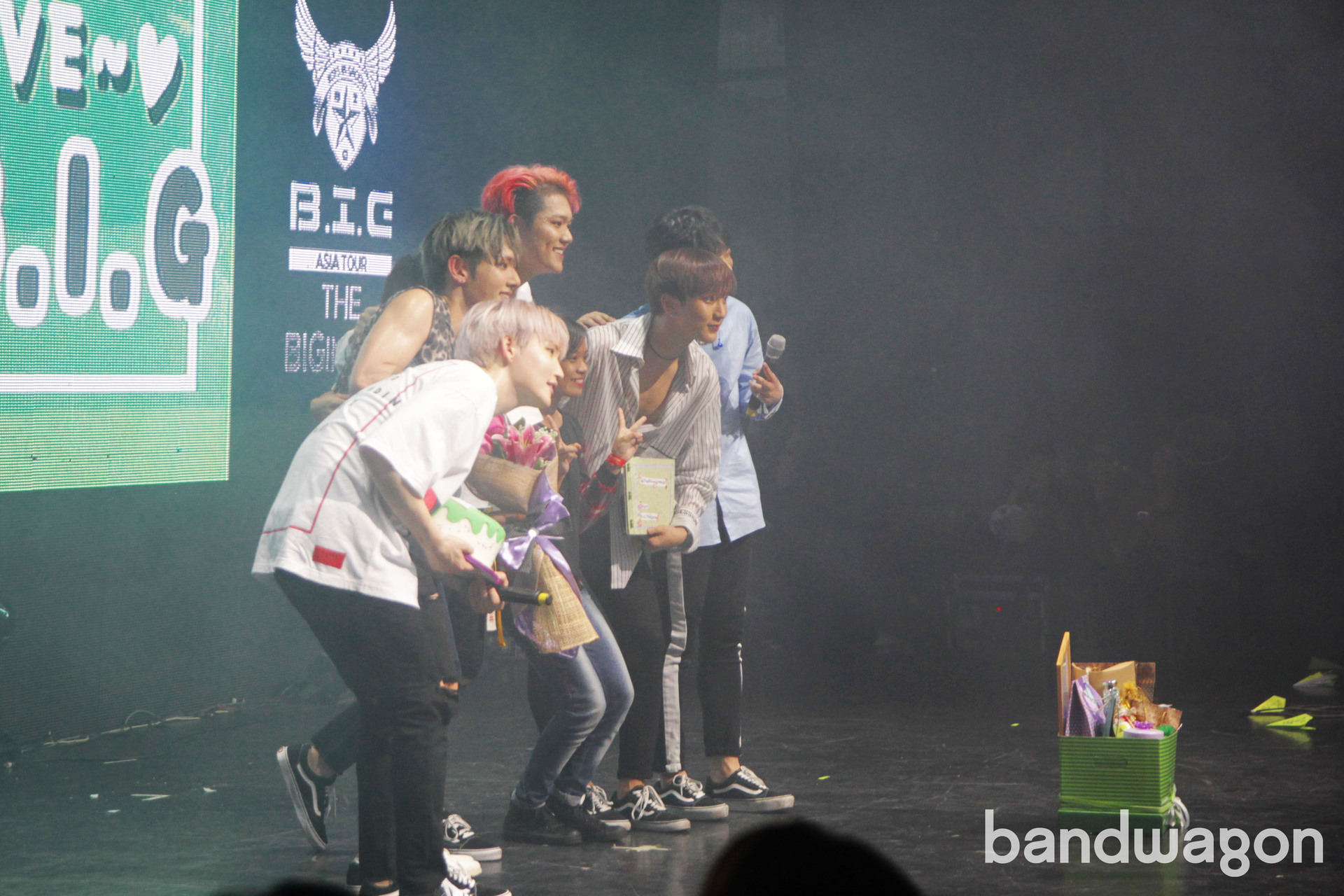 Their official fan group in the Philippines prepared gifts for them and went up on stage during their final ment. A video of their mini fan gathering at SM Mall of Asia also played on the big screen, which delivered their heartwarming message to B.I.G. Benji was surprised with all of the presents, asking one of the girls how long did it take for them to prepare it and if she could speak in Korean.

He was amazed at how dedicated they all were in creating a wonderful experience for them all. In the middle of the set, he even pointed out that his parents were in the crowd. We discovered that they were the cheery couple in the middle of the crowd who danced a bit to some of B.I.G.’s songs. The boys closed their set with an energetic performance of their hit single, ‘Hello Hello.’ As they left the stage, the crowd began to scream for more. 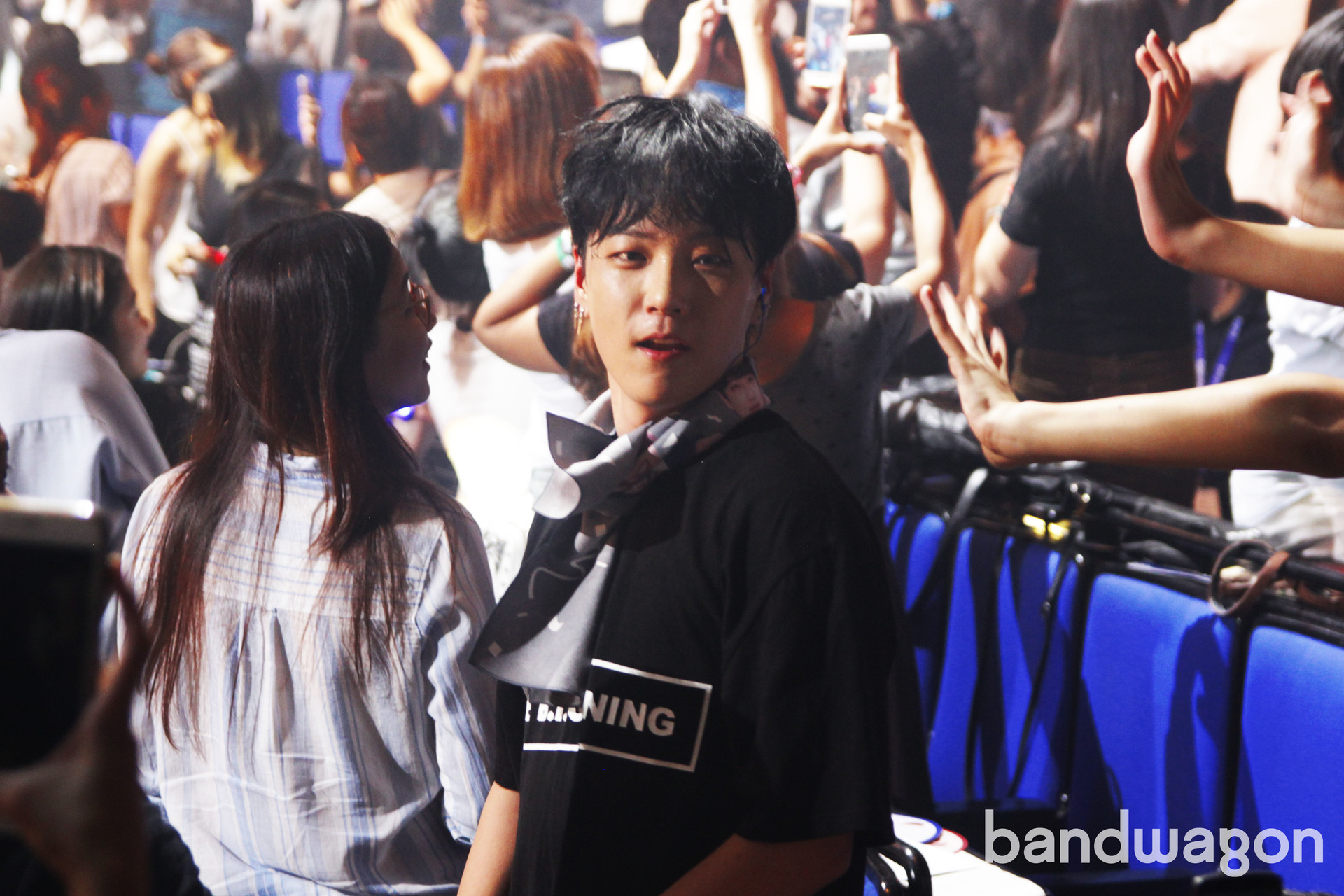 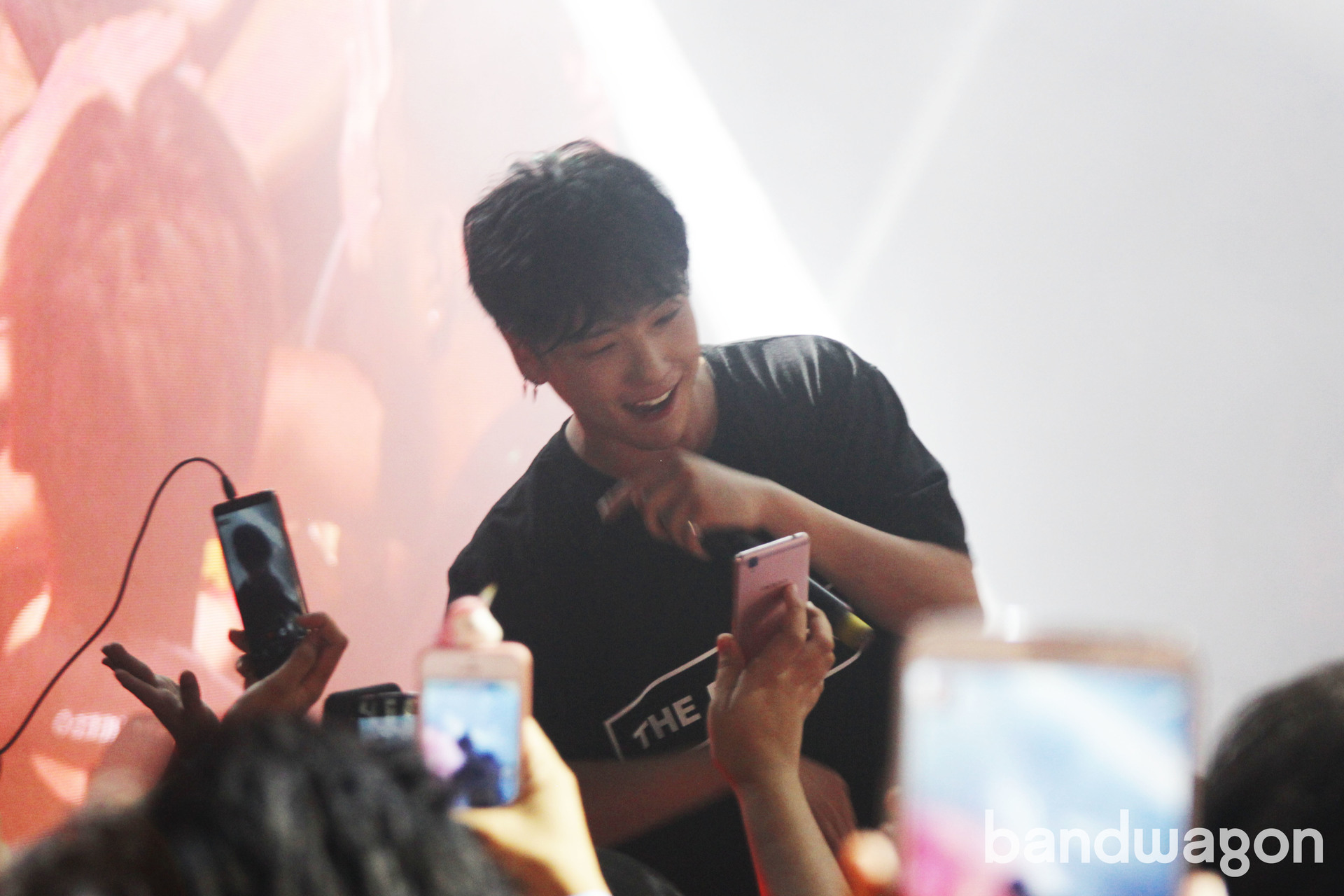 The lights began to point at the back of the crowd where all members were holding baskets and wearing official merchandise from their Asia tour. At our side, we managed to get a closer look at Minpyo who threw candies to us and made cute faces for the fans’ cameras. They performed an encore that included iconic tracks such as BIGBANG’s ‘Fantastic Baby’ and PSY’s ‘Gangnam Style.’ 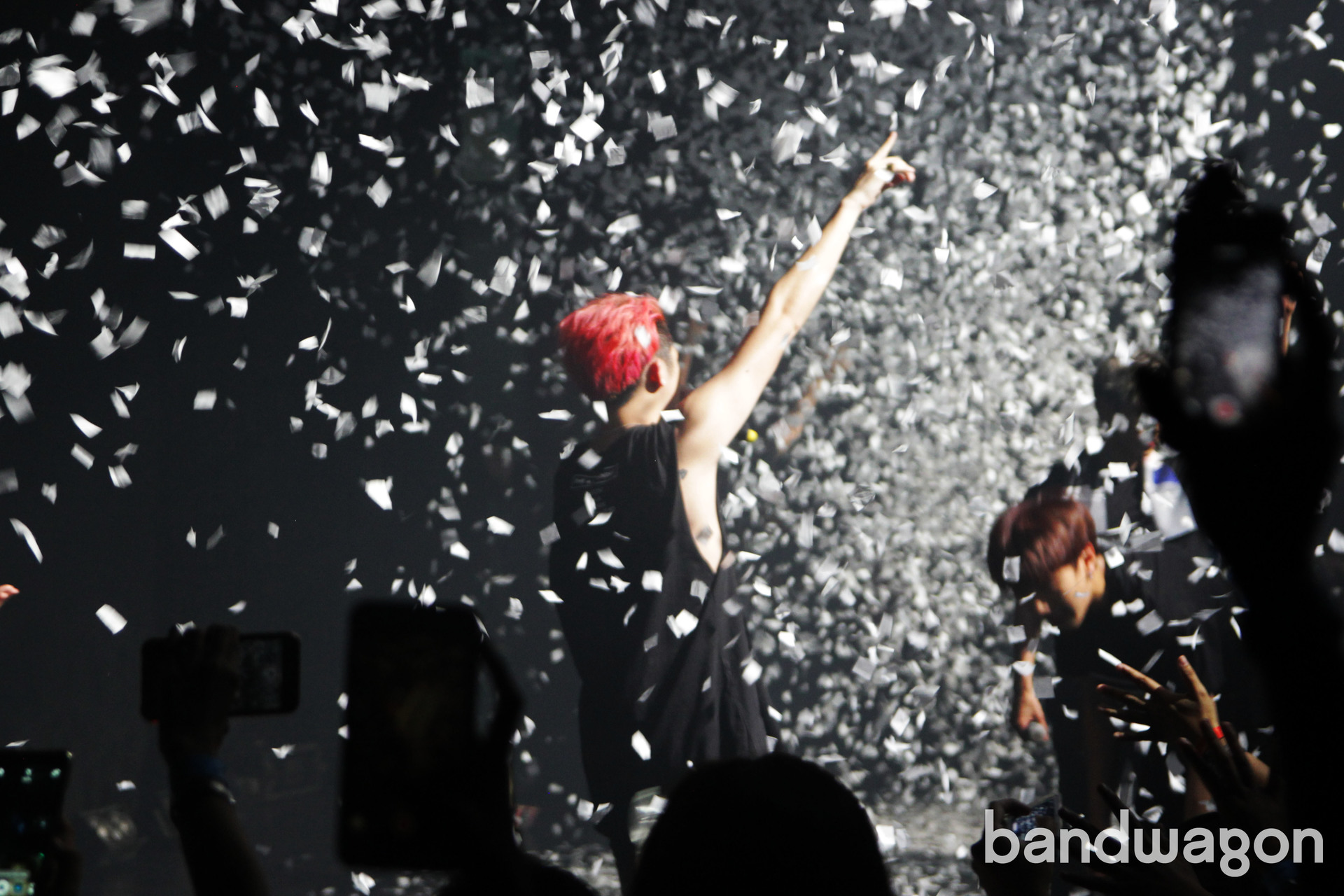 In spite of the heavy rain, we still managed to walk out of the venue seeing smiles and laughs from all their fans. True to a fangirl’s or fanboy’s philosophy, you can never get enough of a good thing like your favorite artist.

Special thanks to All Access Production for the invite!