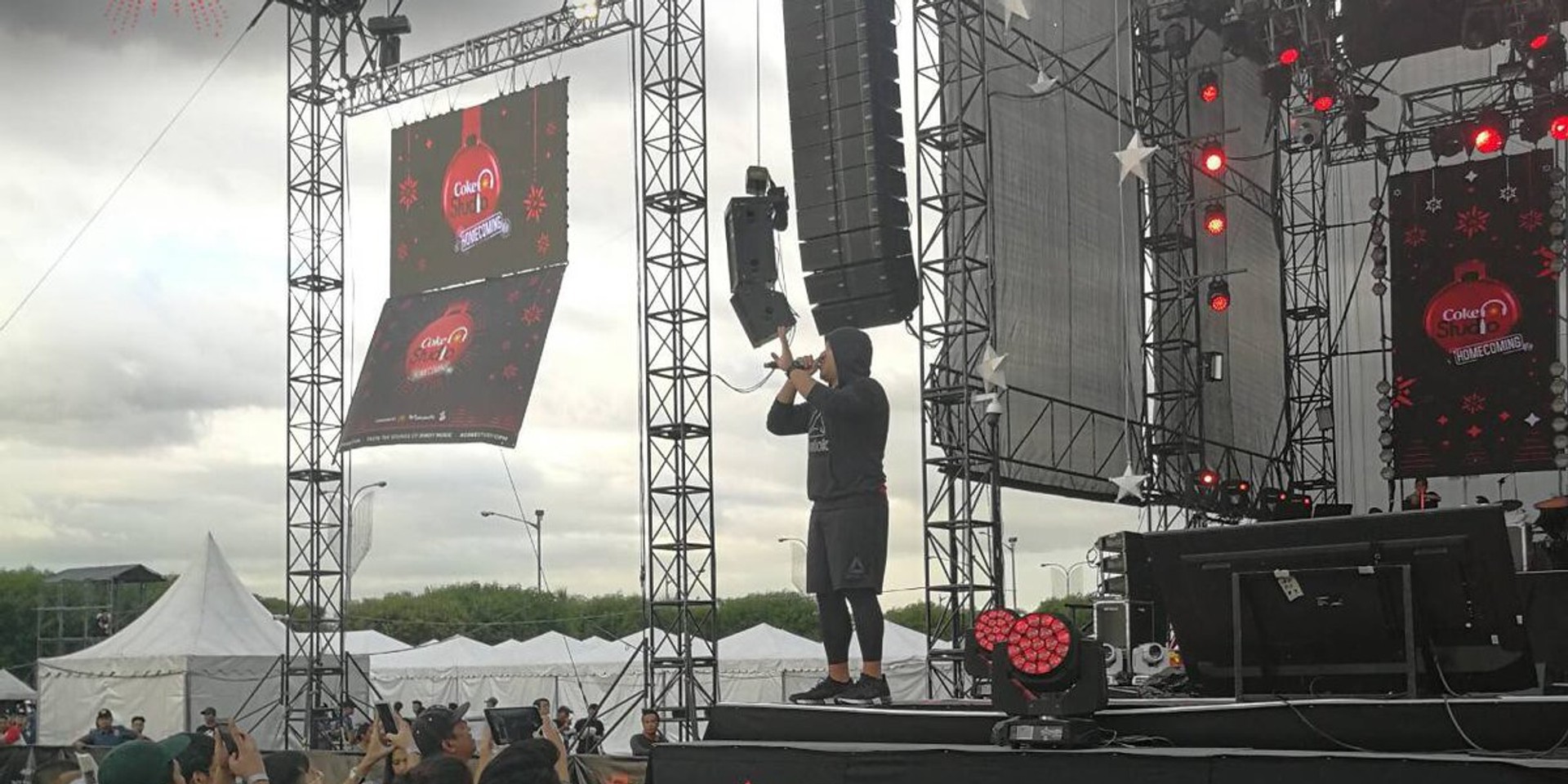 Thousands of fans headed to the Mall of Asia Concert Grounds today (12/07) for Coke Studio Homecoming's Christmas Concert. The concert served as the culminating event for Coke Studio Season 2 which went on air last September.

The free concert kicked off early in the afternoon with Filipino pop-rock act December Avenue, plus a collaboration with pop singer Khalil Ramos.

By 5 PM, the organizers shared that the venue has reached full capacity and entry to the event has been temporarily suspended.

IMPORTANT ANNOUNCEMENT:
For everyone's safety, admission to the #CokeStudioChristmas Concert at the MOA Concert Grounds is TEMPORARILY ON HOLD as we have reached full capacity.

We will re-open the gates once the venue can safely accommodate more people. Maraming salamat po.

Thirty minutes later, the organizers revealed that entry to the venue is permanently closed for the safety of everyone in the vicinity.

As of 5:30 PM, gates to the #CokeStudioChristmas Concert at the MOA Concert Grounds will be PERMANENTLY CLOSED to ensure everyone's safety within the vicinity. We apologize for any inconvenience that this may have caused. Please know that your safety is our utmost priority.

Coke Studio Homecoming artist QUEST got up onstage to ask fans to cooperate with each other and show one another respect for the sake of everyone's safety.

Quest reminds the audience that their safety is of Coca-Cola's utmost importance and asks for their cooperation. This event can only be a success if we respect one another. Maraming salamat po. #CokeStudioHomecoming pic.twitter.com/ujZQhQm8AG

At 6:51 PM, the organizers revealed that the show is experiencing some technical difficulties and for fans to expect a 2-hour delay in the performances.

We're having technical difficulties at the venue and this may cause the concert to be delayed for 2hrs. We apologize for the current situation & we hope for your understanding on the matter. Please watch out for other updates & announcements. Thank you#CokeStudioChristmasConcert

Young local bands Lola Amour and Any Name's Okay both posted on their social media accounts that they will no longer be performing at the concert. The bands extended their apologies and wished for the safety of everyone in the crowd.

Hey guys, due to technical difficulties, we won’t be able to play at the Coke Studio Christmas concert anymore. Sorry guys! 😞

See you guys next year! 🐑 https://t.co/yJYrJkr8MZ

JUST IN: For the safety of all, the management of SM Mall of Asia, Pasay City LGU, PNP and Coke Philippines have decided to reschedule the concert tonight to 1Q of 2019. #CokeStudioChristmas #CokeStudioPH | via @bobreyes pic.twitter.com/TuCjSdL9KX

Coca-Cola Philippines's official Twitter account confirmed the news with an official announcement. The Coke Studio Concert will now take place in the first quarter of 2019. The organizers emphasized that they made the decision to cancel the event together with the Philippine National Police, SM, the government of Pasay, and all of the artists involved. "The safety and security of our audience is our number one priority," Coca-Cola Philippines writes in a statement. They also expressed their thanks for the public's continued support for their Coke Studio campaign.

The Coke Studio Concert will be moved to first quarter of 2019 to ensure the safety of all concert-goers. We apologize for the inconvenience at tulad ng sabi ni Quest, magkita-kita po muli tayo sa 2019! #CokeStudioPH #CokeStudioHomecoming pic.twitter.com/bs3DIzFI6T

We would like to express our profound gratitude for the public’s continuous support for Coke Studio. However, the safety and security of our audience is our number one priority. (1/3)

After careful assessment and request for the public’s cooperation, COCA-COLA together with PNP, SM, THE CITY OF PASAY, AND ALL OF THE ARTISTS, we have deemed it necessary to reschedule the concert to the first quarter of 2019. (2/3)

We apologize for any inconvenience this causes to everyone. (3/3)#CokeStudioPH #CokeStudioHomecoming

Musicians who were supposed to take part in the scheduled event also shared their well-wishes for the massive audience that has gathered at the MOA concert grounds.

Wishing everybody gets home safely 💔 https://t.co/F5Yc3UFhHv

IV of Spades members Blaster Silonga and Zild Benitez thanked everyone for coming to the show despite the cancelation, asked fans to protect themselves and wished them well in their journey home.

Thank you for coming and i hope everyone is safe, take care and see you all you soon.

stay safe, protect yourselves, and go home. i'll see you on some other shows so pls be safe.

QUEST expressed his love for everyone who went to the MOA Concert Grounds and apologized for the day's unfortunate experience.

Ben&Ben, who were also scheduled to perform, asked their fans to take care of themselves - wherever they may be.

Wherever u are, take care always