Young Dreams are a Norwegian pop-collective, fronted by 25-year old Mattias Tellez. More old souls than flippant indie pop, he had admitted that they "don't listen to much present music". With their membership number sometimes hitting a 12, the core group consists of close musician friends who wanted to explore what they could do together as a group.

As a big band, this sort of translates into their music and sound as well. Pitchfork has commented that everything about them has an 'air of orchestral grandeur.' Their music have also drawn comparisons to Grizzly Bear, Beach Boys, and even Vampire Weekend. But why not hear it for yourselves when they head downtown for Mosaic Music Festival 2014?

Thanks to the good people at Mosaic, we're giving you a chance to attend their show AND dine with them over a hearty supper at Makansutra! Allow us to tell you more: 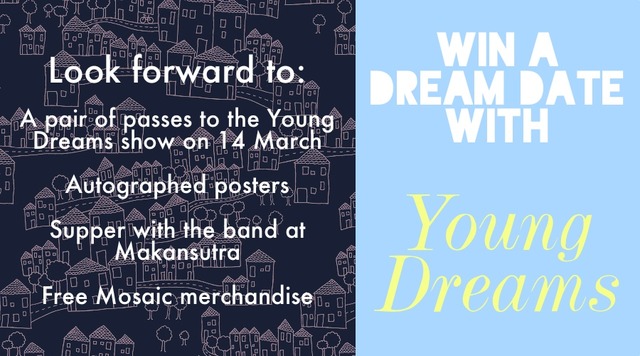 Fill in the form below and you are on your way to fulfilling your (young) dreams! A free concert, supper with dreamy Scandinavian lads, and heaps of free merchandise, no better way to spend an evening at the Esplanade. Results will be announced 26 February, Wednesday, 5PM.