Let’s face it: only a very niche group of people would even be in the least interested in reading a review of a Steve Vai concert. If you haven’t been a fan of his work, for whatever reason, you won’t start becoming one now. But to all the aspiring guitarists who were inspired by this majestic guitarsmith, and the hardcore enthusiasts of the shred guitar genre who grew up (and stuck with) his music across the years, you’re in for a treat. Because, quite frankly, there really is nothing else quite like the Steve Vai experience.

He started the evening off cordially enough, with a reverent guitar soliloquy heavily based on Zeppelin’s ‘Stairway to Heaven’, before swelling into a thunderous tidal wave of an opening track that is ‘Racing the World’, off his 2012 album The Story of Light, of which he has been touring extensively for over the past 2 years, and from which he mostly plays in this show. Singapore was the first stop in his 2014 leg of the tour after a break of 4 months, and it evidently shows a Steve Vai and his tight-knit 3-piece band on top form. And for an even further distinction, his first concert here since 2004 marks his 200th show.

All of Vai’s usual theatrics are there: the flamboyant stage antics, soulful contortions of his lanky physique - occasionally breaking into dance with some groovy moves that would make even Prince blush. Here’s a man who has definitely spent as much time on his guitar as looking damn cool with it. Here’s why: Steve Vai is probably the only the only instrumental rock performer today to actually have several wardrobe changes throughout a show (including an especially epic one, which I’ll get to in a bit), and of course he’s got to have his trusty electric fan blowing for maximum guitar god hair, so go figure. 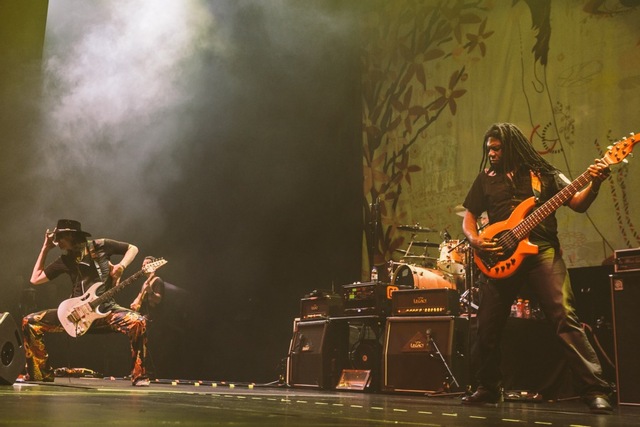 Yes, there’s no denying that Steve Vai is a show off. But mind you, he’s got the goods to walk the walk: one moment making sweet, passionate love to his signature Ibanez JEM guitar on a rapturous rendition of his classic tune ‘Tender Surrender’ (a personal favourite), the next moment abusing his strings with the most spectacular display of whammy bombs and tremolo quacks in ‘Building a Church’ – there is nothing the 11-time G3 headliner can’t do with a guitar. And he’s definitely more than capable of gentle, beautiful melodies, as seen in ‘Whispering a Prayer’, as well as being comfortable behind a microphone, crooning the heartfelt ‘The Moon and I’; elements of his old mentor Frank Zappa can be heard in this tune. One can only wonder how his strings managed to stay intact throughout the 3-hour-long set.

Granted, while his technique is flawless, sometimes the absurd speed of his playing and the mind-boggling number of notes generated per second gets a wee bit too much that it all just starts to sound like a divine flurry of sonic booms assaulting our mortal ears after awhile. Relief comes in the little breaks he takes as each of his band members, every one a virtuoso, takes centre stage with an original piece, such as Vai’s longtime touring guitarist Dave Weiner charming the crowd with a fine acoustic composition off his own EP A Collection of Short Stories Vol. 1, or a more bombastic performance, such as drummer Jeremy Colson’s solo jam on his makeshift drumkit, put together from dustbins to empty buckets fixed upon a shopping cart. 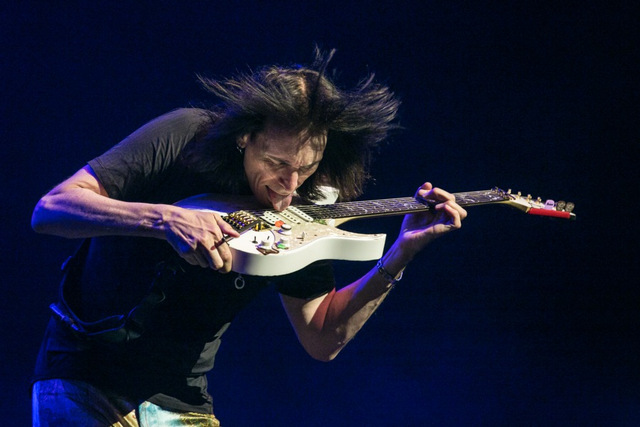 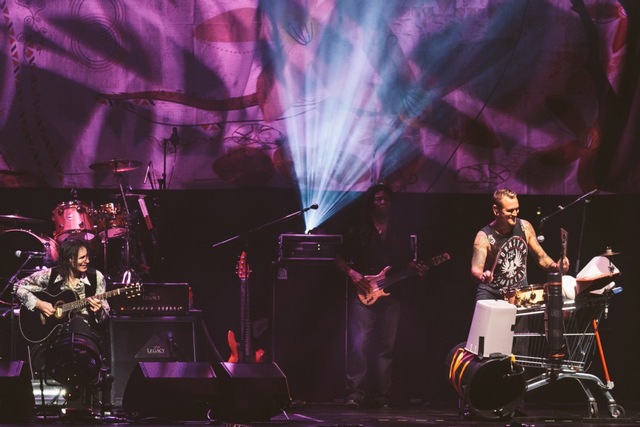 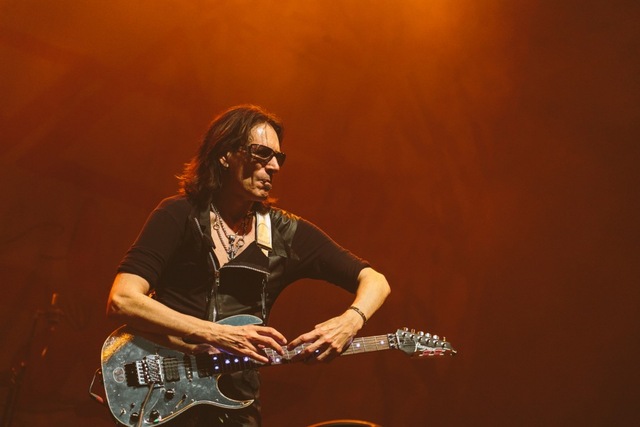 But nothing beats the spectacle of seeing Mr. Vai emerge out of the smoke on a pitch-dark stage at the halfway mark in a flashing LED robot suit, complete with lasers shooting out of his fingers. That’s one thing you must understand about the Steve Vai experience: once you really get his colourful, over-the-top, comically inflated stage persona, you’ll instantly get that here is someone who has reached such an otherworldly level of musical proficiency that he doesn’t need to take himself too seriously. And trust you me that it makes for an entertaining final act, involving 3 lucky audience members, a concoction of crowdsourced beats and melodies, and Alif Putra, the winner of the Steve Vai Guitar Challenge the night before, trading licks with the guitar legend himself.

From snatching a front row audience member’s camera to take selfies, to the often hilarious playful banter with his band, it is clear that the Long Island native’s idea of fun is to push the very limits of what can done on a six-stringed instrument, and just to witness the almost childlike glee of his noodlings one would be hard-pressed not to be inspired, uplifted, and transcended by his celestial aural experimentations to believe that there really are gods that walk amongst us. 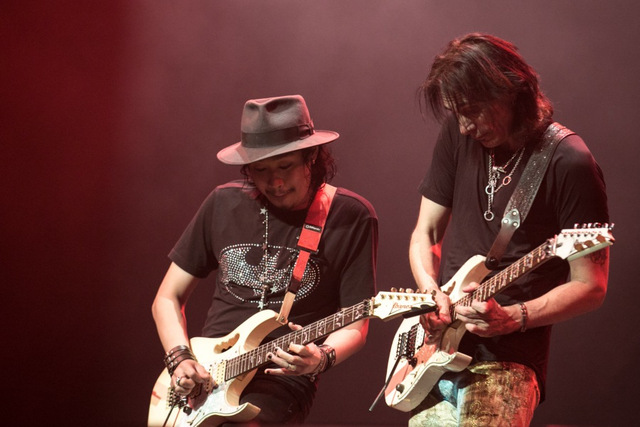 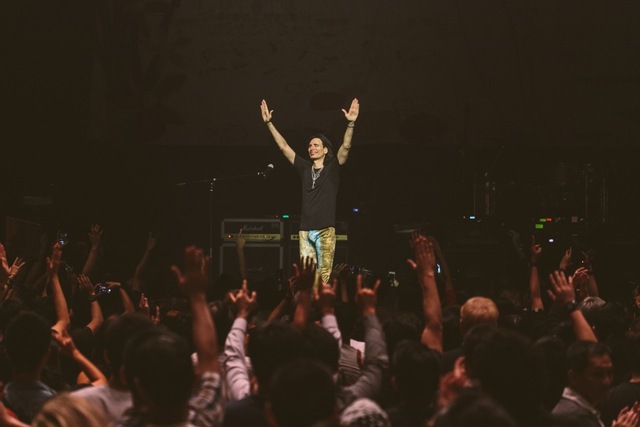 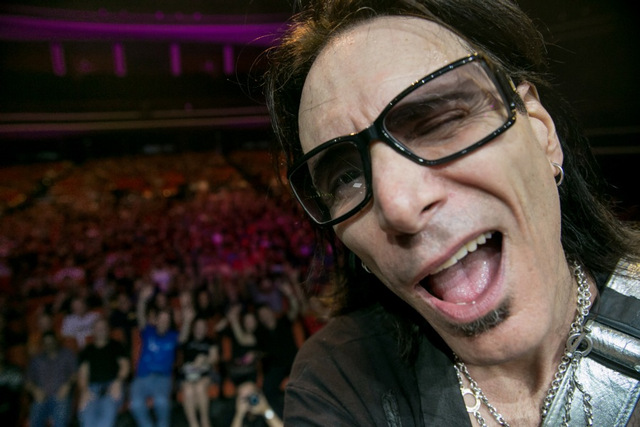