Last Friday I got into a pretty bad accident while riding on my motorbike. It was pouring on the roads and I was basically riding through walls of water. Vision was limited as well, and that’s why I didn’t see a taxi stopping right in front of me at the traffic light junction. I braked. Hard. The bike was starting to fishtail. Only way to avoid full-on collision (and consequently experience human flight) was to swerve to the side. But alas, I didn’t bank enough - my left handlebar smashed into the rear signal light of the taxi and I fell off the bike. What that meant for me was that my left pinky got really f***ed up; I could post up pictures here but I don’t think you’d want to puke all over your keyboard. The doctors said I lost the distal phalanx of my left pinky. I’d forever have 9.5 fingers instead of 10.

Two questions ran through my mind. One: how was I going to scratch that sweet spot in my left ear now? Two: will the surgery and hospitalisation prevent me from watching Russian Circles the next night?

Bloody of course not. Even an amputation’s not gonna stop me from seeing the Chicago-based post-metal trio play live. Their music probably counts as one of the most grandiose and cerebral instrumental pieces I’ve heard, and that says a lot coming from a Godspeed You! Black Emperor devotee. Instrumental they may be, but the visuals and imagery conjured by them are by no means less formidable.

There’s this thing about them that has always intrigued me from the start, and it’s the name “Russian Circles” itself. I know the name is derived from an ice hockey drill exercise, but just imagine for a moment that we don’t know that. To be honest I really thought the guys were really Russian (or at least Eastern European) when I first heard of them. And why would anyone not think that? Their sound have always contained an air of dark ancient rime, like something out of a post-apocalyptic film. It sounds like something you’d listen to while toiling at the Gulags of Soviet Union. It sounds like something you’d listen to while on a tour of Chernobyl.

Of course, post-metal (eg. Isis, Pelican, Cult of Luna etc) is not exactly a light-hearted, whimsical genre. The genre musters a wintry sense of desolation, an isolated capacity that’s best created by post-rock atmospherics combined with metal theatrics. How Russian Circles differentiate from their colder contemporaries is the thicker, crunchier sound they construct with layers of instrumental technicality and straightforward riffs. The overlying monumental concepts are still there, but with a minimalist edge - only 3 band members and a penchant for naming their albums and tracks with vague singular nouns and verbs. Words like ‘Station’, ‘Philos’, ‘Enter’ and ‘Carpe’ say so little, but as abstract concepts they mean so much. This mysterious minimalism is what makes Russian Circles so attractive; they’re effortlessly provocative. 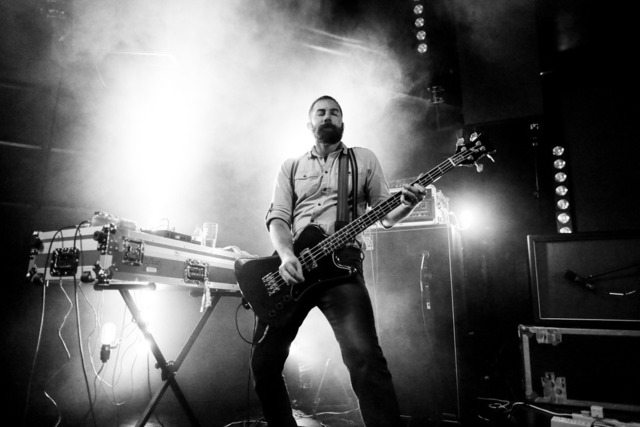 And effortlessly provocative is exactly what we thought about them when they played Tab last Saturday. Thanks to KittyWu Records (like seriously, thanks guys), fans get to experience their incendiary live performance yet again; this time armed with new songs off their latest album Empros, their most heaviest and straightforward record yet.

Even before the band stepped onto stage, we were already treated to the haunting ambient soundscapes that we’ve come to know and love, by way of the textured guitar notes being played behind stage. When the trio appeared solemnly on stage, they instantly struck a commanding presence as they set up their instruments all affixed with the multitude of effect pedals and sequencers needed to produce that trademark Russian Circles grit. The epic night was kicked off with ‘309’ and segued straight into an old favorite ‘Harper Lewis’, and by the time the last beat played, everyone was unquestionable hooked. Even our lead editor Delfina and boss Clarence (who’re not huge fans of heavy sonic distortion) were mighty impressed by the flawless musicianship.

The gig transcended into something more than just 3 people playing instrumental songs on stage - it was a vivid exhibition of their technical prowess and tightly knit sonic architecture. Each band member had a specific role to play and the way they traded parts with each other is something that can only be borne out of years of playing music together and a maturity that surpasses their relatively young age. Brian Cook brought a solid foundation into the mix with his chugging basslines that echoed deep into the room. Guitarist Mike Sullivan didn’t even break a sweat handling his intricate guitar parts, layering various riffs and note tapping with his trusty looper. Dave Turncratz was a complete monster behind the drum set with his precise beats and relentless energy. 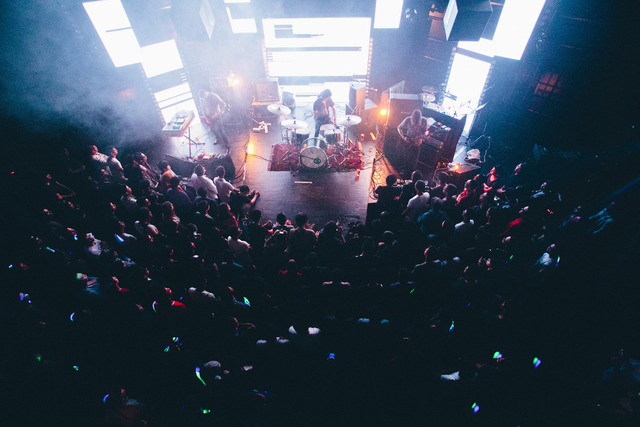 The result is that this basic combination of live bass, guitar and drum sounds intertwine impeccably into one another and create a vast, forbidding cavern of filled with music of palpable vigor. What made it all so staggeringly overwhelming was that we were experiencing endless wave after wave of towering sound.

By abandoning the conventions of structure and vocal input, what is left is the sprawling ambience of music you actually listen to, and not just hear.

It was only perfect that they saved their most exhilarating (ie badass) song ‘Death Rides A Horse’ for last - best to end our experience with something leviathan.

The best way to describe the event is that it felt like watching Planet Earth in an omnitheatre, but infinitely more badass. It was really that epic. I’m not one for fate and providence, but if the forces of the universe thought they could prevent me from watching them play live, let them be damned. I don’t think they’ll ever be ready enough to derail the thermonuclear force that is Russian Circles. 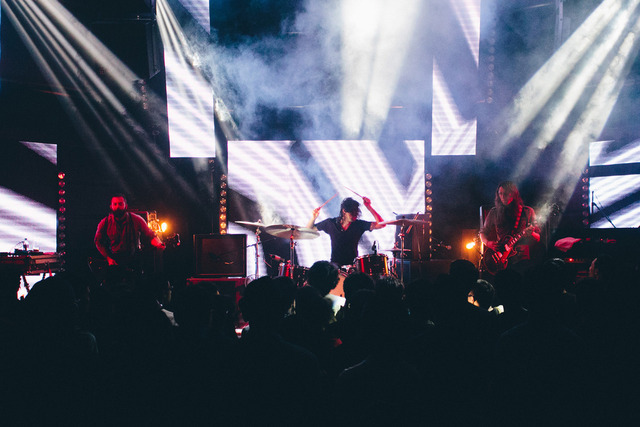