Huzzah! Wednesday's almost ending and it's the beginning to the longest weekend of the year. With the one-two public holiday punch of Hari Raya Aidilfitri and National Day in the next two days, it'll be a very long and a very well-deserved break for us who've been working our collective asses off for more than half the year already.

Just because it's the holidays though, doesn't mean we're not thinking about live music! Here's a couple of our gig picks you can come down for, in between devouring all that ketupat, rendang and the mandatory patriotism. 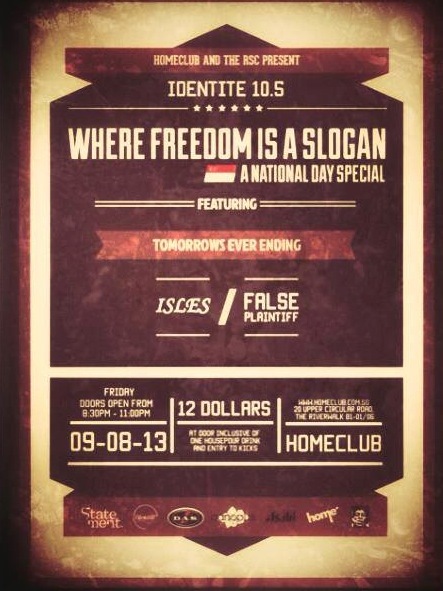 Identite marches on, rain or shine or extravagant National Day Parades with the appropriately titled Identite 10.5: Where Freedom Is A Slogan. This time, they're featuring three young melodic hardcore outfits -  Tomorrows Ever Ending, Isles and our own contributing writer Brandon Tanoto's band False Plaintiff (who've recently released their  gloriously emotive album Well Then, I Guess It's Time To Move On). Get political at Home Club.

For those looking for a more family-friendly affair (and less guttural vocals/chugging guitars), *Scape has a show for you. This one's looking more like a sideshow to the National Day Parade. Starting from 4pm till late, there'll be more than just musical performances by the likes of pop-punk act Orange Cove, Timbre Music regulars 53A, hard rock outfit Patriot and YouTube rap star Tzire. There's free food (!!!) and an after party with the cast of Ah Boys To Men, if you're into that sort of thing I suppose... 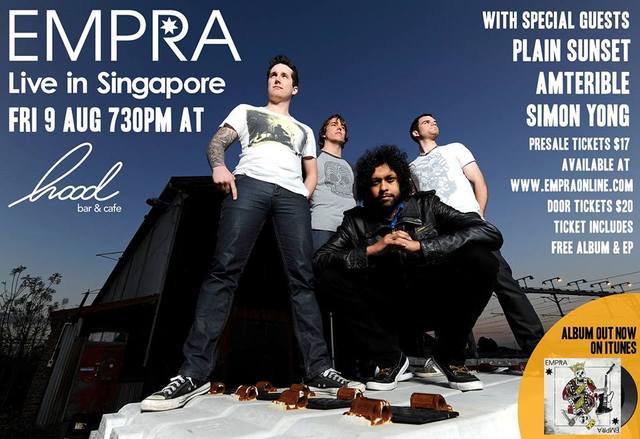 After opening for Fall Out Boy at Fort Canning Green yesterday, Melbourne-based alternative rock band Empra aren't just stopping there. The quartet will be holding their album launch show at Hood Bar on National Day together with old friends Plainsunset, AmTerrible and Simon Yong. Essentially it's a showcase and kind of a reunion of local music acts from yesteryears - people should be familiar with frontman Sanny Veloo of the unfortunately disbanded The Suns. 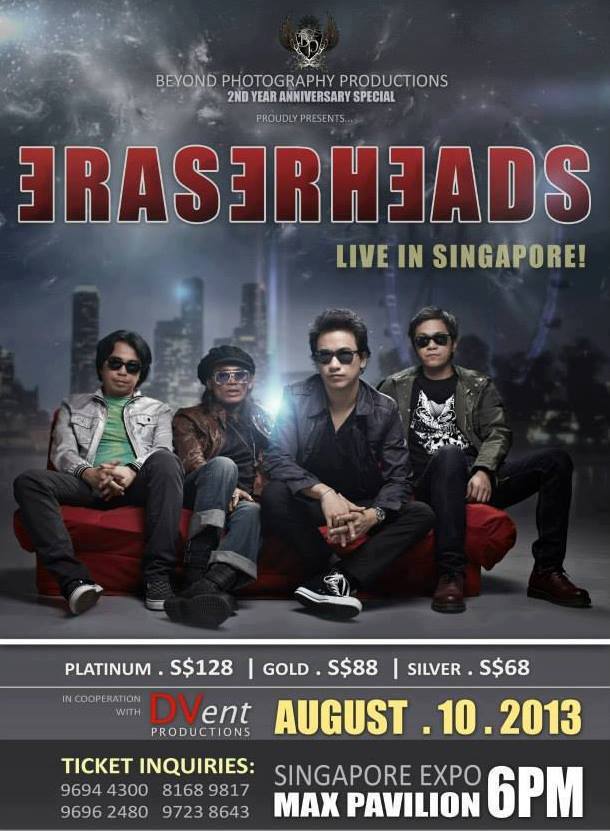 Hailed as 'The Beatles of the Philippines' Eraserheads are perhaps the most iconic rock band from the Philippines. Having played many international shows, including ones in New York and even Dubai, their show in Singapore will be a sort of reunion concert for Eraserheads. Catchy tunes, sincere lyrics and authentic rock n' roll, this is one show you want to catch.

We've seen them in Season 1, sitting in a Volkwagen Kombi van playing instruments and singing, talking about their music in Kombi Rocks cafe - how about we watch them live on a stage? The Kombi Sessions are all aboard for Season 2 and are showcasing their stellar lineup they have in store at the Esplanade Waterfront this weekend. Also the Kombi Van will be making an appearance so lots of photo opportunities will be a-waiting for #instagram purposes. #Enjoylife