The more the merrier! With 8 members in the band, you can be sure that music-making will be a loud affair. Ahead of their EP Launch next Friday, we sit down with the folks of Sapporo Safaris as we discuss band roles, overcoming creative differences, and other important universe-centric issues like Star Wars or Star Trek.

Kev: I sing and write most of the songs. I also speak Japanese to a certain extent.
Roy: I play the guitar. I’m stoned almost every day.
Cheryl: I play the trumpet and do some backing vocals.
Shaun: I am the band’s drummer and lead antagonist.
Jacq: I play the synthesizer and melodica.  I add the electronic vibe to the music.
Edmund: Bassist, loves carbohydrates.
Justin: I play the guitar. (Also the poster boy)
Scong: Shi Chun, everyone calls me Scong. Trumpet, trying to play other instruments too. Role-wise in the band, horn section with Cheryl. (a really bad) backup vocal, and owner of most of the lame jokes cracked within the band.

How would you describe the sound of Sapporo Safaris?

All: Big, huge, loud, grand, beautiful, enormous, gargantuan, full of surprises, and packed with communal sing-a-longs. And Epic with a capital ‘E’.

Where did the name ‘Sapporo Safaris’ come from?

Roy: Well I used to work in Night Safari, so one fateful day I was wearing my casual shirt bought from Night Safari. We were deciding what name to call the band and we were drinking Sapporo beer. The rest is quite predictable.

There’s quite a number of you in Sapporo Safaris, were there any creative differences during the making of the EP?

Roy: Of course there are! But that’s the reason why we sound what we are now. Creative differences help a lot in shaping up the sound through different musical influences.
Scong: I guess we have very diverse influences don’t we?
Shaun: Yes but they’ve always worked out somehow.
Edmund: Yeah, but we compromise. That's the beauty of it, being able to incorporate bits and pieces of various influences so our songs won't be one dimensional.
Cheryl: Everyone’s very receptive to suggestions and new ideas so eventually it always works out fine. We’ve also come to better understand each other’s’ preferred music/styles in the process.

Was there anything you guys were listening to when you were settling about making this EP?

What are some of the upsides of making music in a big band?

Shaun: When playing with a big band we can expect many different sources of influence to our music. This is especially because all of us come from different musical backgrounds. In the end it is difficult to pigeonhole us into some genre because of the myriad different sounds that can be heard in each song and between the different songs.
Scong: More hands for the job, in a sense. Also more colors we can use around!
Cheryl: The more the merrier! More fun, more ideas, more voices, more hands, more free rides home.
Justin: And cheaper jam sessions!

What do you add to the vibrant indie music scene in Singapore?

Scong: I’d take the “indie” out! Music transcends borders and shouldn’t really have much of a strict categorization between genres.
Seng: Our awesome tank-top wearing, kiewmoh-ed frontman.
Kev: What’s kiewmoh? But anyway, we’d like to think that we add that big family band element to the scene. We’re not just musicians but spiritual brothers and sisters. We even pulled out of Baybeats 2013 at the last minute because we didn’t want to leave any man behind.

When can we expect a full-length album? Any future plans?

Kev: Possibly a follow-up EP later this year! We have lots of songs in our heads. 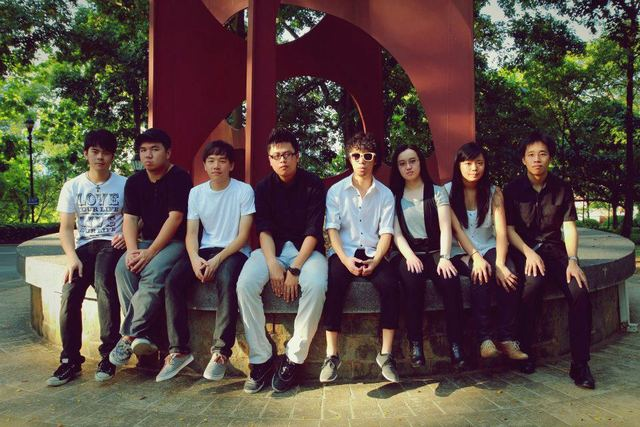 We’re mostly inclined towards Star Wars but really, you can’t ask such conflicting questions of the universe.

Mostly trumpet, but we’re a big fan of Careless Whisper.

We are Arcade cuh-razy.

Sapporo, but surprisingly some of us actually don’t like beer.

Through the mix of answers, Roy insists on Internet Explorer.

Classical Hip Hop; look out for it on our next EP. Okay we’re kidding, but seriously Edmund can drop a mean rap.

Whatever gets our music to other countries more effectively. *hint hint*

Like Classical Hip-Hop, we’re open to having both on stage simultaneously provided Kanye lets us finish.