From organic beginnings, friendships, and a lot of hard work, SparkleDrivenFairytale came to be. And now, they are ready to launch their anticipated debut Coming Out of Tragedy. We talked to this post-harcore outfit about the DIY recording, Thrice, and which one of them is a bad driver.

SparkleDrivenFairytale will be lauching their EP at Homeclub's Identite. More details HERE

Hey guys, introduce yourselves and how the band came to be.

Marc: After the failure of our previous band, Shark and myself contacted one of the first drummers we’ve ever worked with. Eugene was one of the younger friends we had but whom we knew had the chops. We decided to hit the studio. The forth member of SDF had come from a guitar pedal purchase. Daniel cheated me by making me pay for more than the pedal’s worth by the way. We had a very similar take on music and I had casually invited him for a jamming session with Shark, Eugene, and myself.

This combination was intense. With Dan’s and my love for effects, and the chemistry Shark and Eugene had, we were pretty sure we had quite a set up here. However, I was struggling with vocals and guitars and decided I much preferred playing guitar as I had fronted all my previous bands before. In came an old friend of mine, Raqeeb, whom I remembered had a unique voice and massive scream. He came for a jamming session and the birth of Coming Out of Tragedy marked the end of searching for a new band, and the rest is in this EP.

How are preparations for the EP launch going?

In a word - hectic. It has been a long time coming, and we’re pretty much all perfectionists. So between work/school, practices, creating designs, mixing and liaising for printing and such, it’s been a pretty tiring month for us all. But we’ve had great help from friends who’ve stepped in to help us out continually and lift a big load off our shoulders. 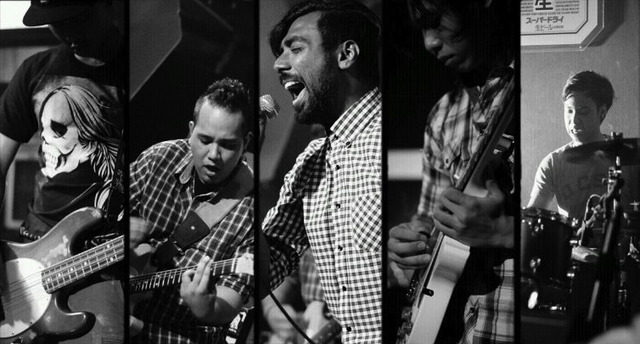 Tell us more about the making of Coming Out of Tragedy.

Almost everything about this EP is DIY, but done as professionally as we could. You’d never guess (hopefully) that drums were recorded in Eugene’s room, most of the vocals were done in Daniel’s living room, and the entire EP was mixed in Daniel’s room. This has definitely given us a great sense of ownership for this release, having seen it take shape from the initial rough mixes to a product that we’re more than proud to call our own.

Any main themes behind this album?

It’s a semi-conceptual album documenting a person’s struggle, kind of paralleled with the challenges we faced as a band. Lyrically, each song captures a moment of vulnerability. At times they straddle self-doubt or desperation and a strained hope, eventually reaching an emotional catharsis. Raqeeb definitely wears his heart on his sleeve as he tells these stories.

What challenges did you face in the making of the EP?

Daniel: Even though everything was pretty much DIY, the recording stages were fairly smooth. I think the best thing a sound engineer can hope for is for the musicians to not only be technically competent with their playing, but also have a clear idea of their “sound” and be able to communicate that clearly. That being said, this EP has been my biggest undertaking so far as a recording/mixing engineer, so capturing and representing that “sound” in a recorded medium took a fair bit of experimentation, but I definitely gained experience though.

M: One of the biggest challenges that we had to face was frankly, our opposing opinions. Daniel and myself have very strong opinions on how certain things should sound. There are some parts in this EP where it’s him giving in, and some parts where it’s me. We have progressed from musicians to brothers and, well brothers fight. Every family has that smarty-pants kid. We have Daniel, and we wouldn’t trade him for the world.

Tell us about your relationship with Anaki Records.

They’ve been great friends to us and have been nothing but kind and supportive. We’re very grateful.

We’re also curious about the band name; what is the story behind it?

Marc: SparkleDrivenFairytale stands for that elusive dream, and the fragile drive and passion that sometimes fades chasing a dream that never seems reachable but still perseveres. Many musicians, especially in Singapore stop doing music once they start working, get married and have children.  I will admit it does become difficult not to, but the release of this EP is just the beginning to our story and we will be around with this lineup for a while.

We also noticed that you guys listed Thrice as one of your influences, do you find that their continuous effort to progress their sound is something that you aspire to do?

We are all ridiculously huge fans of everything Thrice released. The evolution of their sound feels pretty fluid without being like “okay guys, our fan-base is slipping, time to shake things up”. That would be ridiculous. How can anyone stop liking Thrice. Anyway I think as our influences shift, our sound would naturally follow suit though probably not consciously.

What are some other artists and albums that have inspired your music?

Marc: Deftones – Around The Fur; Incubus – Make Yourself; Jeff Buckley – Grace. The movement and lyrical genius of Jeff Buckley, the melodies of Incubus, and the grit and edge of Deftones pretty much sum it up for me.

Daniel: The National – Boxer, As Cities Burn – Come Now Sleep, La Dispute – Wildlife. It may not show much in our music, but the songwriting on these albums blew me away and really made me appreciate the beauty in subtle nuances.

Eugene: The Getaway Plan – Other Voices, Other Rooms, The Devil Wears Prada – With Roots Above and Branches Below. These two albums may be opposites, but they both have intrigued me. From the simplistic yet tasteful drums from The Getaway Plan to the heavy hitting, straight up drumming by The Devil Wears Prada. Another thing is the melody amongst the chaos, which is definitely noticeable in our music as well

EP – done, EP launch – done, what is next for SparkleDrivenFairytale?

We’re continually writing and refining songs; it’s probably one of our favourite but most frustrating processes as a band with such diverse influences. We will definitely be around for a long while more, so you can expect more releases and shows from us.

Tell us 5 things we don’t know about SparkleDrivenFairytale.

Shark makes you angry although he doesn’t speak, Marc makes you angry when he speaks, you should go to the loo before Raqeeb gives you a lift, Daniel is gifted and Eugene likes to think he’s part Caucasian.