Words by Bandwagon
Photography by House of Riot

Formerly known by the ingenuous name of Riot! Records, the management company have rebranded themselves into the House of Riot and, looking at the group's history, it's endearingly apt. Starting out to help oversee the affairs of a then-young rock band named The Great Spy Experiment (GSE) when they were selected for the US festival SXSW in 2007, they've since opened their doors to celebrated local musicians iNCH and Charlie Lim.

Having only three acts under their banner name has made them focused on grooming, promoting and nurturing all of them for bigger stages, especially for Charlie Lim who's been busy with his ambitious double EP Time/Space — all while maintaining close relationships with the three artists.

Now with their upcoming concert, which will feature all of their acts and will also serve as a launch show for Time/Space, we speak to head honcho and founder Mike See about how they got together, their proudest moment to date and what we can expect at the Esplanade Concert Hall on June 6.

Tell us more about this triple bill.

This show has been a long time coming. We're constantly challenging ourselves as a company to pull off something bigger, more interesting, or simply more fun than the last. Having sold out shows at Esplanade’s Late Nite Series and Mosaic Festival, we felt compelled to land something that will not only be a real milestone for our artists, but also inspire others that independent musicians in Singapore are just as well-positioned to deliver a world class experience, at a world class venue.

So we had our sights set on being the first independent collective to stage a triple bill at the Esplanade Concert Hall. All three of Riot’s acts — Charlie Lim, iNCH, and The Great Spy Experiment — will be launching new material at the show on 6th June. Charlie, whose sophomore record Time/Space has been three years in the making, will be premiering the fruits of his (damn hard) labour at the show. On a more poignant note, after 10 solid years together, this will be the GSE’s final show.

It'll indeed, be a riot.

You’re seen the acts grow through the years. What would you say is the most rewarding thing about working with them?

Exactly that – witnessing the growth! There’s an incredibly parental motivation about my role as manager to our artists; watching them get better at their craft, pushing their own boundaries, picking themselves up after falling and being recognised for their work gives me immense pleasure.

You’ve helped propel The Great Spy Experiment to be one of Singapore’s top indie acts. What was it about them that you saw was so great?

Clichéd as it may seem, I saw a certain magic in them when I first caught them live in 2006. Their sound was fresh and they had a great look about them – individually and together as an outfit. Ultimately it was Saiful’s amazing songwriting that really drew me in. 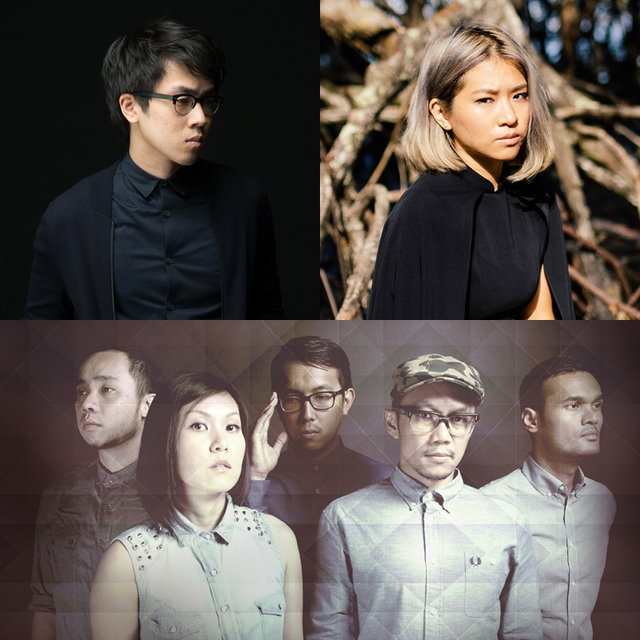 The current roster of artists in The House of Riot (clockwise from top) — Charlie Lim, iNCH, The Great Spy Experiment.

SXSW 2007. This was my first trip with The Great Spy Experiment and we overcame all sorts of challenges to land on becoming the first Singaporean band to perform on this amazing global stage. There was a moment during the festival set when I was standing on the side, nervously watching them start their set, uncertain of the reaction we would get from an untested audience. Midway through the set, the club started to fill up and people came to me asking who the band was, wanting to buy a CD. We received rounds of drinks from the audience, and offers from festival roadies volunteering to work on our future shows.

It was an emotional moment and I had to hide my tears from everyone else. I was deeply touched by, and extremely proud of that moment — not just because GSE had a great set, but the fact that I knew then that musicians in Singapore are just as capable of producing great music as anyone else out there. That one moment gave me the faith to do what I’ve been doing since for Singapore-made music.

A montage clip of The Great Spy Experiment's trip to SXSW in 2007.

From experience, what are some challenges local and independent music labels face.

The ecosystem in Singapore is not quite as established as it could be for musicians here, making it extremely challenging to build a sustainable and commercially viable model for both artists and music labels. This cuts across everything from the creative and production process, to infrastructure, and audience perception.

Having said that, no industry starts with everything in place from day 1. I think it is about recognising these challenges, finding creative ways to overcome them, and importantly, leaning in on core support networks, such as the incredibly supportive National Arts Council and Esplanade teams.

How have you overcome these challenges?

Adopt a problem-solving mentality and work with the right partners to scale and progress. It’s not a cushy journey, and hard work, resourcefulness, and humility will go a long way to helping anyone get through hurdles.

Name three traits one in the music industry should have.

Tenacity. Because it will be one hell of a bumpy ride. Being able to pick yourself up after each fall is not simply a good to have, but a must-have to survive in this industry.

Commitment. To both your craft and the journey. Keep your standards high, commit religiously to those high standards, and be ok with putting in the hard work to get there. It’s a very trying career choice, and you will feel like giving up very often. Anyone without a high level of commitment will fade away in about 2 seconds.

Professionalism. Respect yourself by treating others the way you want to be treated. I say this a lot - Be a rock star on stage, not off stage.

1. You will have a hand in making history for Singapore-made music. It's time that you believe in, and be proud of the music made on this little island we call home.

2. Charlie will be launching his new record Time/Space at this show.

3. Both iNCH and The Great Spy Experiment will be playing new material at this show.

4. This will be a new high in the experience of local music, delivered with the audio and visual quality it deserves.