Hailed as “Asia’s Largest International Music Festival At Sea”, It’s The Ship! returns to Marina Coastal Drive’s docks to pick up even more party passengers for their much-hyped 2015 edition.

Following last year’s massively successful voyage, we fully expect another wild, uninhibited weekend at sea and on the beach. Taking place over four-days and three-nights, from 20–23 November, festival-goers will be hosted aboard the luxurious Royal Caribbean International’s Mariner of The Seas. The party cruise departs from Singapore and will take you to Langkawi’s gorgeous shores and back, with crazy parties, jacking music and first class service to entertain you every nautical mile along the way.

Organizers The Livescape Group have once again put together an incredible lineup of high-profile international DJs and live acts for 2015. Headliners include superstars like Showtek, Ferry Corsten, Far East Movement and Adventure Club.

But outside of the big room festivities going on, we particularly encourage you to check out the Black Butter Records showcase happening onboard. The independent London label have rounded up bass-house mavericks like Woz, My Nu Leng, Applebottom and Alex Adair. And if you’re into that sort of sound, we supposed a name like Oliver Dollar (stylised as Oliver $) will be right up your alley as well! Of course, the lineup is large and exhaustive, so there’s plenty for everyone to pick from this veritable party buffet. 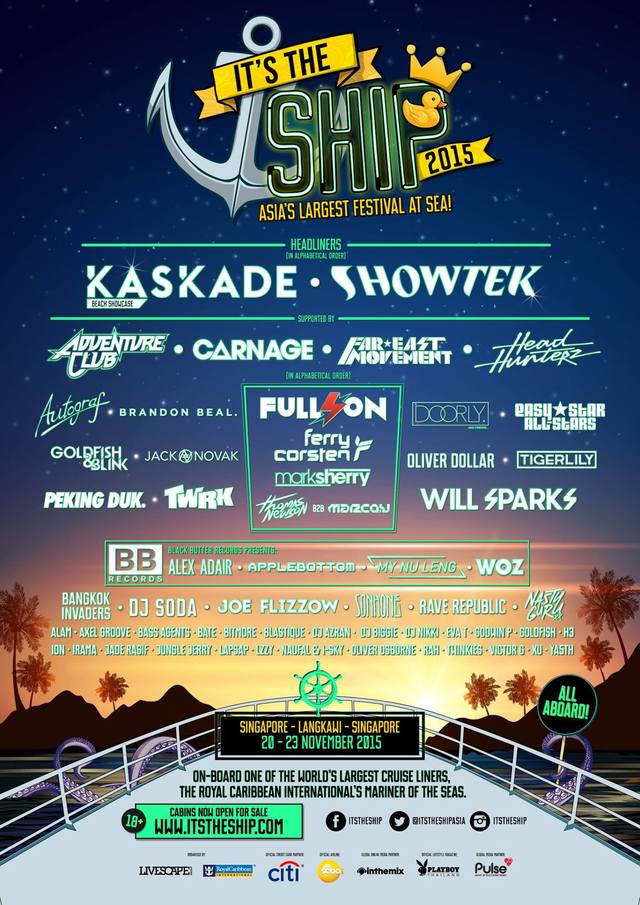 But, as much as we’re excited for the hugely popular international acts on the bill, we figured we should show a little love to the regional artists on It’s The Ship! as well! These DJs and musicians are just as awesome as their international counterparts, so it’d be well worth your time to go and check out some of the lesser-known regional talents on offer over the course of the cruise.

Here are just 5 Southeast Asian acts we recommend you see while out at sea.

The first lady of Darker Than Wax proudly represents the local underground electronic scene on It’s The Ship!  Acclaimed for her versatility on the decks and an innate ability to read the floor, Rah’s repertoire ranges from hip-hop to drum & bass to dub to Afro-Caribbean beats, so you can expect a wide-range of bass-bound anthems take you through.

Described as the “main architect” of Singaporean underground nightlife, Godwin P has been one of those ever-present beacons for discerning punters for well over a decade. Currently calling kyo home - the techno, house and tech-house guru knows how to work intimate rooms and large-scale arenas - always keeping the floor moving with a deeper set of tunes.

Joe Flizzow doesn’t need an introduction, but we’ll do one anyway. The man is the godfather of Malaysian rap, and is one of Asian hip-hop’s most influential figures in general. Formerly one-half of groundbreaking duo Too Phat, Joe Flizzow has since gone on to make an even bigger name as a solo artist and the founder of Kartel Records. This one’s guaranteed to be baek.

Hot on Flizzow’ heels is his frequent collaborator and one of Malaysian hip-hop’s household names - SonaOne! A rapper of the highest caliber with radio hits (like ‘No More’) and multiple industry awards under his belt, SonaOne is someone you definitely have to catch. And we’re betting that he’ll be sharing the stage with Flizzow at some point, just call it a hunch.

Made up of a pair of amazing Malaysian DJs in their own right - Arabyrd and Nadia - Twinkies is a project that sees them joining forces to double the impact. Individually, these two girls are already pretty electric, but as a duo, expect them to ratchet the energy up to 11 on this one. They go pretty pretty hard with the trap, so brace yourselves!

For more details, head on over to It's the Ship's official website.