The people behind Lithe Paralogue have been working hard to maintain a legacy — not for themselves, but for acts they want to celebrate and nurture.

Establishing the Museum of Independent Music (MOIM) late last year, Lithe Paralogue has been providing a space for bands to refine their craft with their jamming studios, while allowing the public to visit and learn about Singapore's history of fledgling independent music, decades in the making. While MOIM has propelled further appreciation of original Singaporean music in the past, Lithe are taking things into their own hands in releasing brand new local music they've deemed as quality work.

Launching with a split release between Singapore's sub:shaman and elusive Japanese collective Qu, Lithe Records will be setting up a showcase with both bands, along with a set of supporting acts that include Forests, the second band set for a release on the newly-founded label.

It's a perfect match for Qu and sub:shaman, both bands having had their own unorthodox approach to rock music. Qu has a beat-boxer and as the band describes themselves, "human beat box meet post-hardcore", athough that is, frankly, a wildly modest description when you start listening to them. sub:shaman, on the other hand, have similarly defied categorization, blurring lines between prog rock, free jazz, musique concrete and electronic music.

Lithe Records will be releasing the split on a medium that has actually survived through decades of DIY use — the almighty cassette. Seeing how vinyl as a format has recently gotten into prominence, its fellow analog sister has also been enjoying an increased amount of new releases, mostly by indie labels but it seems music fans have taken a liking to its inexpensive cost, collectability and even its (relatively) lo-fi sound reproduction. 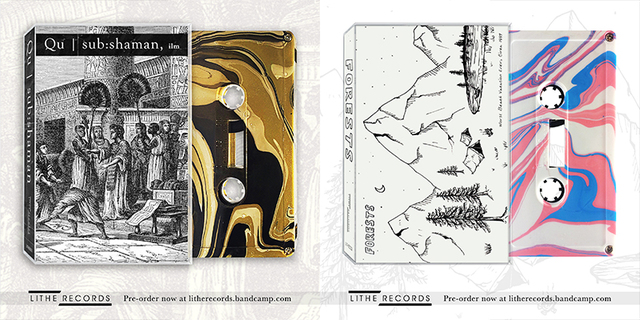 FROM L-R: The split release with Qu and sub:shaman, the debut release of emo trio Forests.

The second release by Lithe Records is also the first series of recordings by new band Forests, whose understated mash of emo and math-rock fits in well with the stream of emo revival bands that are still going strong around the world. While a far cry from the experimentalist tendencies of Qu and sub:shaman, what ties these bands together is Lithe's refined taste for creative bands and we're definitely excited to see more releases.

Now we just need to go find our old Walkmans.

You can find Lithe Records on Facebook and Bandcamp, where their releases are available for purchase and free online streaming.