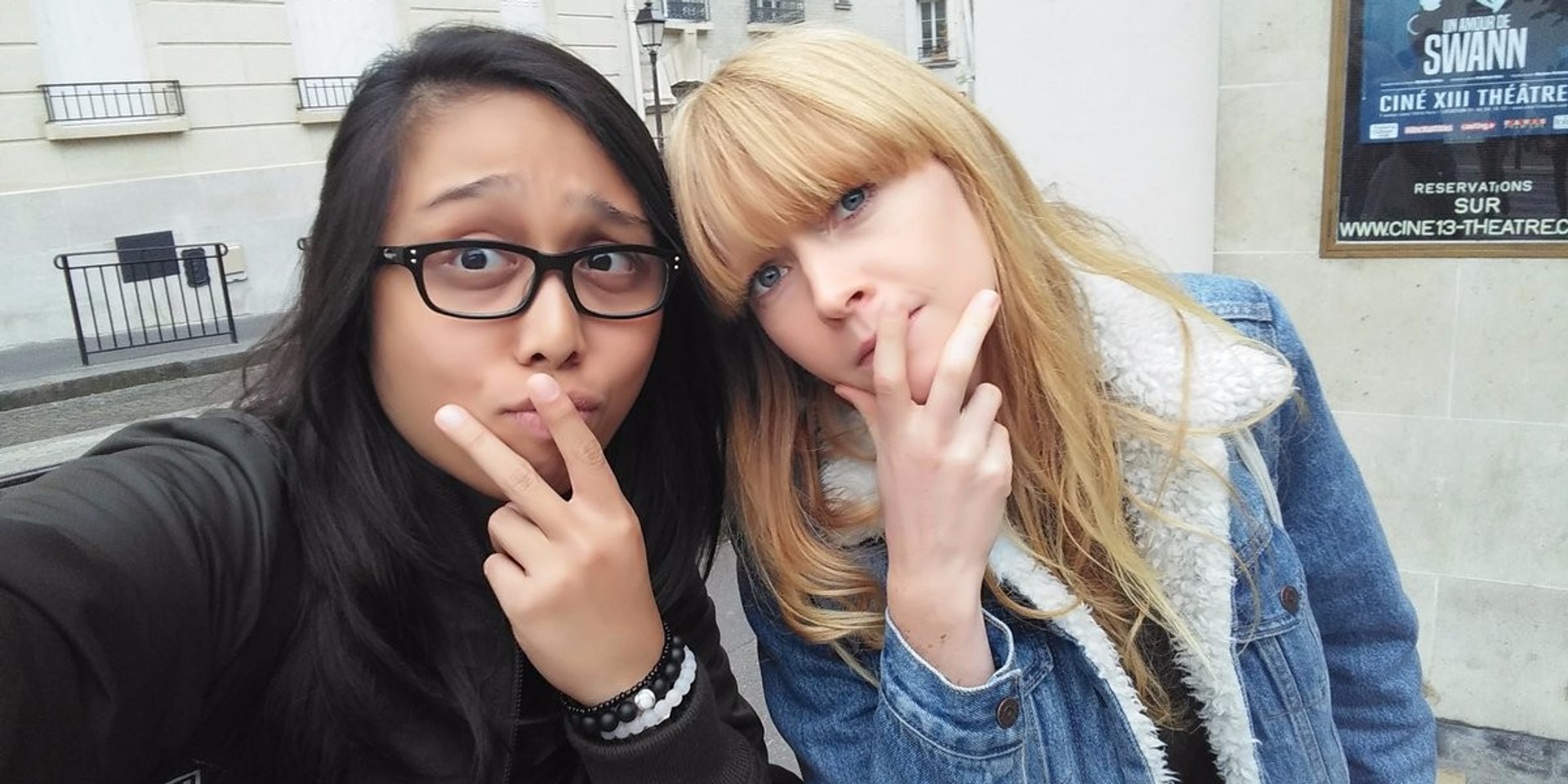 Lucy Rose is busy going around the world to promote her short film and new record, Something's Changing. The British singer-songwriter just wrapped up a full Asian tour, including a Manila show, which we had the privilege of hosting.

Lucy is travelling with her tour manager (and husband) Will Morris, and two session musicians — Andrew Stuart-Buttle on keys, guitar and violin, and Ben Daniel on bass and guitar. In October, the band will be joining Paul Weller on his North American tour.

Before Lucy and her band flies to the US, the band has several show dates in Europe with the first one being in Paris. Filipino exchange student Jannie Iyog was first in line for the show at Cine 13 Théâtre and was rewarded for her punctuality with a Lucy Rose sighting.

Not only did she get a selfie, but she also got an invite to have dinner with Lucy and her team. (In her Manila show, 6 early birds got to watch her soundcheck.)

As i was waiting for the doors to open, Lucy went out the building and saw me then shE ACTUALLY INVITED ME TO DINNER pic.twitter.com/Dw0F9hpFdf

Dinner also included drinks (and Instagram stories) with Lucy. "There were 2 more fans who wanted to say hi to Lucy, so Lucy also invited them to sit down with us! They were Cat and Élvio, a couple from Lisbon, Portugal," Jannie shares with Bandwagon.

The early bird gets to the front row. Always.

AND OF COURSE SHE WAS AMAZING AS ALWAYS pic.twitter.com/3vJ3a4JBHM

After the show, Jannie was scheduled to wait in the station and get on the train home the next morning....

BUT WAIT THERE'S MORE!!!!!! I was just supposed to stay at the train station overnight to wait for my train home

But Moirai (the Greek goddess of fate; also the title of a wonderful song by the lovely Lucy) obviously had other plans for her. The generous musician had an extra hotel room and gave it to Jannie for the night.

Jannie shares how she ended up in a hotel room booked by Lucy Rose:

"In the middle of the show while Lucy was tuning her guitar for the next song, she shared something about a TV appearance she did. She was supposed to stay behind, while her team drove to Cologne for their next gig, so she booked a hotel to spend the night.

However, the schedule of her TV appearance was changed and  she now had to go with her team to Cologne. The hotel was already paid for and would just go to waste if nobody used it so she asked the crowd if anyone needed a place to stay for the night.

My new friend Cat raised her hand to say that I needed the room."

Pics or it didn't happen.

SO HERE I AM STILL ON A HIGH WITH ALL THE WONDERFUL THINGS THAT HAPPENED TODAY. THANK YOU @lucyrosemusic NEVER ENDING THANKS TO YOU!!!!!

"I can't change it all/ And I can't make it right/ But I could give you warmth in your coldest night".

- I Can't Change It All, Lucy Rose

THANK YOU SO MUCH LUCY AND WILL!! 💕💕 have a safe trip to Cologne and the rest of your tour!! YOU CHANGE LIVES!!!!!! THANK YOU THANK YOU 💕

Jannie on what sets Lucy apart from other musicians:

I think what distinguishes Lucy Rose from other artists is that she isn't afraid to veer away from the usual. We can see this in the evolution of her albums!! She uses different techniques, but she does not lose the "Lucy-ness" of all her songs.

Her merch is also not the usual merch artists sell!! Tea and chocolates!! And the biggest thing was her trip to Latin America. Most artists would not take the risk she took maybe because of financial reasons or because of the inconvenience/security issues of the whole trip. Lucy was brave enough to go on an adventure, unsure of what was going to happen but at peace with the fact that there were these 40 people who believed in her and for her, that reason was more than enough to push through with the trip.

Lucy has touched so many lives not only through her music but also through being the grounded, kind-hearted, honest, and amazing person that she is."

Lucy Rose is currently on tour in support of her new record, Something's Changing. Purchase the album here.