Give MUTEMATH a stage and they’ll give you chaos; beautifully controlled chaos. Despite being confined to the seated venue of Esplanade Concert Hall, the audience did not let that get in the way of the fun. Neither did the vocalist Paul Meany, but more on that later.

The nearly-full hall was filled with sheer excitement; people waiting with bated breath. It took about 20 minutes after the reported starting time set before the lights dimmed and everyone hollered in excitement. The usual Mosaic announcement came on, preceding the arrival of the band. All eyes were on the dimly-lit stage, waiting for the band to make their arrival. But there was no one. Amidst the confusion and tired anticipation, some cheered wildly. We could not see anything until we turned behind and whoa, there they were.

The band came out drums ablazin’ to a rapturous reception in a New Orleans-styled drum march from the back of the venue. They made their way to the stage, with audience members on the ground floor doing the best to get so much at least to touch any of the four-member pack. As each member found solace in their individual instruments on stage, Paul took his place right at the piano launching straight into 'Odd Soul', the title track off the last record.

Their music, a nicely-weaved hodgepodge of math-rock, soul, funk, blues and electronic music, made an explosive combination coupled with the band’s fiery charisma on stage. Much has been said about their drummer Darren King and wow, can he bring it. That dude was on fire. He was never too showy, unlike many of his technicality-centered counterparts, but his polyrhythmic style was precise and fluid, yet hectic. Vocalist Paul was brimming with energy throughout, whether he jumped on his piano or with his fluent dance moves on stage, which earned the screams of many a lady in the audience. 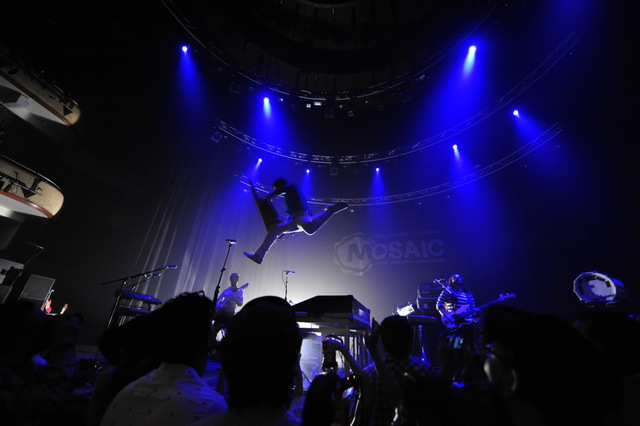 The band ripped through their three-album discography with plenty of ferocity and tightly-wounded musicianship. Fan-favourites like ‘Blood Pressure’ and ‘Spotlight’ got the crowd riled up. On the other hand, the band premiered new tracks from their forthcoming record. They sounded very promising. In particular ‘Hit Parade’ which sported bright gospel choir-like synths behind Paul’s flawless vocal range. Be prepared when it drops.

Their set came to a head when stage hands unleashed a big LED bed, which Paul used to ride over the audience. I can spend a long time digging out words to accurately describe the scene, but only the pictures do it justice. It was utter exhilaration as audience members on the ground floor frantically rushed to help support the bed as it went through above their heads. Being seated at the back, I managed to hold it for a few seconds before it changed course. That was pretty awesome.

The band showed that they were exceedingly talented instrumentalists as much as they were showmen, engaging in a few bluesy jams scattered in their set that kept the crowd going. They even stepped up to engage with those at the front, allowing them to join in by banging on snare drums held forth by Paul.

Ending with arguably their most popular song ‘Typical’, the band said goodbye to the crowd, with genuine smiles and without any tired eyes in sight. Bands like them are hard to come by these days. Their frenzied energy on stage was awe-inspiring and immensely entertaining. One of the greatest live acts I’ve ever seen. Period.