What is Nathan Hartono up to these days? Having debuted his vocal stylings at the Esplanade seven years ago, Nathan has done quite a lot since then. A regular in theatre productions, keeping busy with writing music... and school. Currently studying in Berklee College in Boston, he somehow manages to squeeze out a few videos on YouTube and next month, a late night show at the Esplanade with all original songs. So, to answer what he is up to now, we have all the answers.

Hey Nathan! What are you up to these days?

Tell us more about Berklee! Is the new environment doing you any good?

Oh definitely. It’s probably one of the most diverse schools in the world, period. And that helps a lot with building up a larger musical vocabulary, and more eclectic tastes. You’re surrounded by so much talent, it’s intimidating but inspiring all at once. It also helps that I’m finally learning things about music theory, and understanding the building blocks of music. Its just an amazing environment to be in.

It has been seven years since your last Esplanade recital. Do you still remember that show? Tell us more about it.

Haha… it's very foggy. I was so young!! I remember not really believing I was doing a solo show till the actual day itself. I was backstage in the dressing room right before the first show, and was just thinking, “…oh shit, there are about 200 people sitting in a room behind this wall, who paid to come watch me. What on EARTH am I going to do??!?!?!” It was pretty unreal. But I learnt so much from it, and I came out a wiser performer and musician.

You’ve also been super active in the theatre scene, what do you like about it? What are some challenges you face?

I wouldn’t say SUPER active, but definitely dipping my feet into unknown waters more times than I’m comfortable with! I have always loved the magic of live theatre, nothing quite like it. But I never really expected to be the guy on stage doing it, you know? That was pretty unreal as well. (At this point, it kinda seems like I just find myself in amazingly fantastic situations and just go with it, haha…its not far from the truth, to be honest) But it was such a rush, performing in a new medium, forcing myself to rethink everything I thought I knew. My biggest challenge was simply getting used to the concept of being a different, believable, human being on stage for 2 hours. My comfort zone is being myself, for 30mins up to an hour on stage, when I perform. So this was super different. 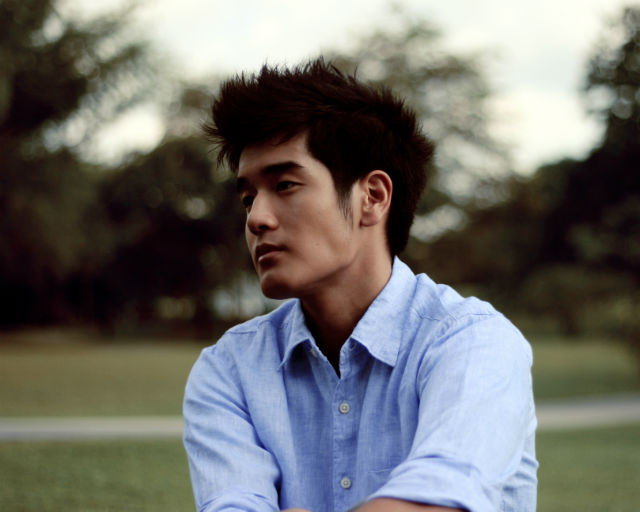 So, theatre or music?

Neither. Performing. That’s what I love. I can’t say I’m partial to either really, because I just really love creating connections with an audience, regardless of the medium. Evoking thought and touching hearts is something 14-year old Nathan Hartono would never even DREAM he would be doing today. The fact that I have been given the opportunity, is something I will never take for granted.

Tell us more about this upcoming show of original songs at the Esplanade.

It’s exciting stuff! First full length solo show in a pretty long time, so it’s just a lot of thought and preparation right now. I’ve got a pretty good number of original tunes, new and old, ready to go for this show. It’s gonna be a good mix of sounds too! Got a sick lineup of musicians for the show and I’m just really stoked.

What are your main impulses to write about music?

I try to take writing as an exercise, as opposed to a ‘I’ll do it when inspiration strikes’ kinda thing. I realized that the only way you can really get the good stuff on the notepad, is if you constantly work that writing muscle. Keep it sharp and strong, so you will always have new ideas, new stories, strong links. Constant writing also helps filter out all the rubbish in your head too. More than half the things I write will never see the light of day, but it’s good, because that bad idea has now been materialized and extracted out of my brain. So now I have more room for the good ideas! It’s a weird process, I know. But I love it.

You’ve started out really young and have accomplished so much, what is something you’re really proud about up to date?

That I haven’t spiralled down a path of sex, drugs and alcohol. Haha…nah, I kid (but not really). I think the one thing I’m proudest of is I have built something out of nothing. When I was 14, I had no idea what I wanted to do with my life. I had a little talent with music, but I didn’t think much of it, I barely utilized it that much. Flash forward 9 years later, when I am a music student and a functioning musician, who has performed on 100s of stages for tens of thousands of people (rough guesstimate here.) in my short lifetime. I’m not a showoff-y type at all, but I can realistically look back and say, ‘wow, I’ve done quite a lot’. But as great as all that is. I still want to do more. I want those 100s of stages to become 1000s. I want the tens of thousands to become hundreds of thousands. I have the rare privilege of being able to do something that makes me happy, and makes others happy. I’m very fortunate and proud of that, and I never want to stop.

Any takeaway lessons from your experience so far?

Nothing replaces a good work ethic. Constant practice and hard work can and will take you places.  I know that no matter what, there’s always room for improvement because I can always do better, do more. It’s that hard work that takes raw talent and turns it into something amazing. I’m still working my way towards ‘amazing’.

How do you feel about this ‘heart throb’ label you have somewhat acquired?

Don’t look a gift-horse in the mouth.

What's next for you in the upcoming months?

Lots of rehearsals for the Esplanade show, writing and recording bunch of new material, performing here and there! I’m also in a bunch of groups in school, most notably an acappella group called Pitch Slapped who are competing in a huge competition next year, so lots of practicing and working stuff out for that. Haha… same same but different.

Nellie McKay | Get Away From Me

This was her debut album she released when she was 21. The depth of the musicality and lyrics constantly makes my blood boil. HOW IS SOMEONE THAT GOOD?!? I love her lyrics, they’re endearing, funny, cutting and brash all at once. All set to lush orchestrations that she arranged herself! Come on. And her VOICE. Her voice has a soothing throwback vibe to it, and it reminds you of a classic jazz record. But listen closely and she’s cooing through lyrics about stalkers, stabbings, and misbegotten foreign policy...she also raps. True musical freedom, I love it.

This was a collaboration album between author Nick Hornby and Ben Folds. Ben Folds is one of my favorite artists, ever. His music is always so well layered and full of little nuggets of musical gold. Yet it comes in such an easy-to-consume package that’s good for almost any mood. What I absolutely loved about this album though, is this: Nick Hornby wrote all the lyrics to the songs, sent them to Ben, and Folds just wrote music to his words. That process intrigued me so much. It really showed me the importance of good lyrics and a good story, and how deep a story can go within the span of a 4 minute song (listen to Belinda, its an amazingly rich story, all told in a tiny little song). It’s a perfect marriage of music and lyrics, one that I haven’t found any equal to till today.

I just love this guy. Conor O’Brien has such musical vision, its heart stopping and gut wrenching all at once. His second album Awayland is much better realized, musically. But I loved this debut one, because you see that progression from one to the other. The range of stories told in this album was also just an amazing journey to go through.

Bringing back old-school soul. I just love his sound. One of the coolest new vocalists, that has music that is chilled out but grooves so hard at the same time. Amazing lyrics in this one too, very strong and confident messages.

Josh Ritter is probably one of the best songwriters today, period. One of my favorites is 'You Don’t Make It Easy Babe'. This guys got metaphors up the wazoo, and they’re all beautifully crafted, all wrapped by a honest story. Not much else I can say except, I will die a happy man if I can ever write like he does.