The all-day music celebration originated from Paris turns 21 in the Philippines this year! It’s gonna be an exciting and happening day of music on 20 June as there’ll be 20 stages going on simultaneously across Makati City and Intramuros to commemorate Fete de la Musique (World Music Day).

Initiated by online music discovery platform Ndfy.me, along with indie production organisation Docdef Productions and Filipino music site Vandals On The Wall is presenting #FeteIndie2015, one of the stages in Fete de la Musique, to showcase and celebrate local indie music.

This year's event is set to be a music festival better than last year's. Expect a day filled with great food and drinks, activities and of course, an eclectic range of live music performances from an extensive list of local artistes.

As promised, the free entry event sounds sure to be better this year, as they've filled the lineup with a wide-ranging pool of music talents. Festival goers this time can look forward to several popular indie acts, including female trio The Raes, four-piece math folk band Fools and Foes, alternate folk soloist Austin and indie-pop/noise outfit We Are Imaginary. Among these indie sets, they’ll also be having young ambient/synth-pop artist BP Valenzuela and experimental fusion band Farewell Fair Weather, the former who performed at our Bandwagon Stage last month. Those looking for the exciting mosh-worthy rock acts can get their fix with several high-energy performances by alt-country rock act The Strangeness, indie-rock outfit Oh Flamingo, well-known rockers Flying Ipis, post/math-rock trio Tom's Story, and rock quartet The Purplechickens.

#FeteIndie2015’s lineup truly has something for everyone, and they’ll also be featuring artistes from the hip-hop side, Ninno and Cutrismith, as well as modern rock bands Lions and Acrobats and Pitik. There’ll also be world music group Dayaw, offering a diverse and emotive fusion of worldbeat and jazz-rock.

If you already can’t wait for these exciting live performances, get a feel of the fest with this sample playlist curated by Ndfy.me.

Entry to the event will commence at 2pm, and the fun and music starts at 3pm. RSVP to receive news and latest updates of the event.

Get a load of the full line-up here: 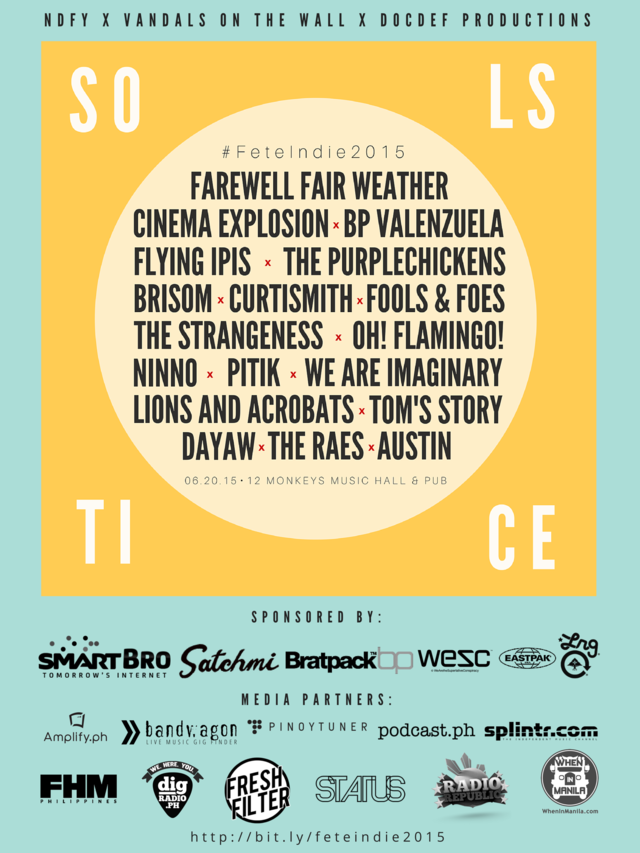 And here's an illustrated map of the stages that'll be happening on the day: 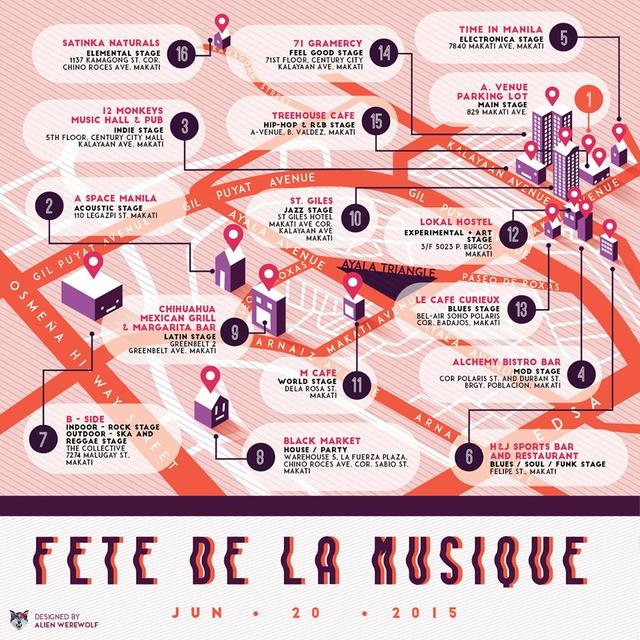