Let’s face it. The music industry is one that's especially tough, rigorous and hard on the mind and body. You face criticism on the get go and decisions which are ready to backfire with the single bat of the eye. As with most artists in this industry, creative juices run low at some point  and others exhaust their pool of resources in haste. Writer's block is barely just a nervous breakdown away.

Two options are presented in this baffling circumstance like coloured pills in Neo’s palm. You take the blue pill: the more realistic and socially conscious approach of the two. You dig deep and consume years upon years of time and money in search for that new sound, that new melody, that new hit. Taking away from the excellent film Love & Mercy, Brian Wilson from The Beach Boys suffered heavily to make some of the greatest pop music ever made.

Or you could take the red pill: you leaf through your dad’s old records, magazines to search for and imitate that age-old guitar lick, that album cover with the stark blue-yellow colour scheme, that spiralling word-play in the verse. Inspiration is dreadfully important for artists but there's always a fine line separating the act of being influenced and the simple act of copying. Call it Cryptomnesia (a memory bias where a forgotten memory, thought or idea is perceived as a new inspiration), but we call your bluff.

These are five instances where music plagiarism has had us wondering which came first, the egg or the chicken. We play judge to them. 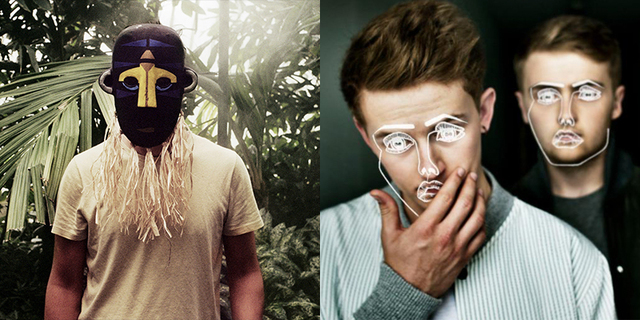 Two of our favourite electronic artists but connected in an uncomfortable predicament. UK duo Disclosure has been receiving flak from Aaron Jerome, also known as SBTRKT, after releasing details of their sophomore album, which features the striking imagery of a feline. Coincidence or not, this is congruent with SBTRKT’s release of Wonder Where We Land, which places a mythical cat front and centre.

Artwork from Disclosure’s debut album was put under scrutiny after Jerome wrote in a tweet (which has since been deleted), ‘first lp mask theme. Second lp. anonymous cat theme’. Thankfully, it all seems to be water under the bridge after he tweeted that it is all in jest and Disclosure have taken it all in stride as well. Thank God, we just can’t stomach the sight of these two electronic giants at war.

Verdict: We deem it not worthy of a lawsuit or of any copyright infringement else our local post-hardcore boys Caracal might just have a go at them too. Friendly advice, perhaps the duo might want to check on their art director’s credentials?

(The Estate of) Marvin Gaye Vs. Robin Thicke 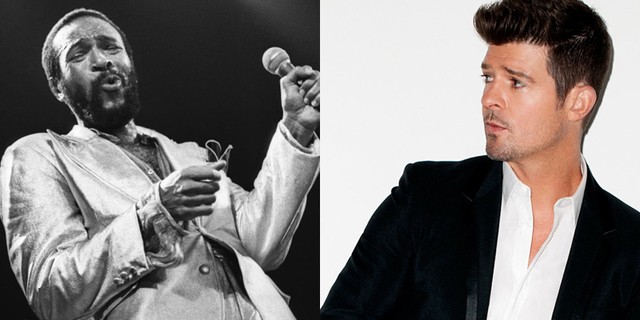 There has been plenty of controversy stirring in this pot alone — topless women in suggestive poses mar this specific summer anthem as Canadian R&B singer Robin Thicke and friends glare and eye woman with off-putting eyes, like pieces of meat on a butcher’s rack. Many feminists were riled up but it’s the family of the late Marvin Gaye who sent an official court of order. His classic single ’Got to Give It Up’ had the masses swaying to his beat in 1977 and it seems as though Thicke took a leaf out of Gaye’s writings and plastered his name over it. The similarities are pretty damning too.

Despite Gaye’s passing in 1984, his children want their rightful slice of the pie and to restrict future sales of ‘Blurred Lines’. The truth is easily attainable but Thicke insists that despite the strong resemblance, the ideas are wholly self-written.

Verdict: Guilty as such. While the 3.8million USD he is due to pay to Marvin Gaye might not speak volumes, considering the number of times the single has been sold. This coupled with his divorce from his wife, Paula, of nine years and the three-figure sales of his album in the first week, I wouldn’t want to be Robin Thicke right now. 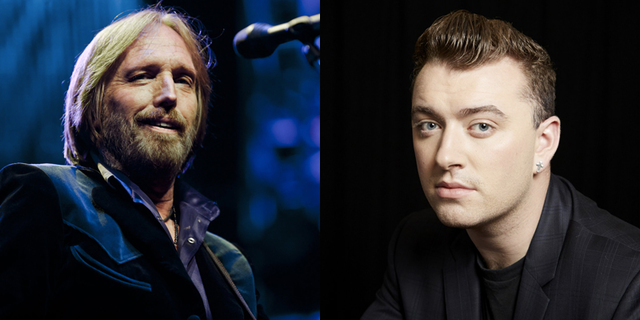 As one of the three top British Male Solo Artists of 2015 with George Ezra and Ed Sheeran, Sam Smith must be pretty chuffed with all the success and attention ever since he broke out with Disclosure's 'Latch'. After having written an album full of downtempo and emotionally-affective tracks in his debut In the Lonely Hour, his name has found itself synonymous with modern melancholia pop.

But accolades and awards mean less compared to when American guitar legend Tom Petty is making conversation about you. Unfortunately for Sam Smith, the buzz is about the similarities between Petty’s 1989 tune ‘I Won’t Back Down’ and Smith’s single ‘Stay With Me’ and Petty’s eagle-eyed lawyers have taken notice of it.

As displayed in this YouTube video, raising the pitch and speed of Smith’s single will allow for the similarity in melodies during the chorus to be seemingly apparent. As it is, it does seem like Petty’s guitar-chord progressions has been retained but with Smith re-modelling it on a piano at half the speed.

Verdict: Close but it has since been settled out of court. Tom Petty has proved he is not like his name suggests, as he absolved Smith from any wrongdoing and said that "these things happen". Good Guy Petty seems like he has no hard feelings as he has since received a 12.5% royalty fee with fellow songwriter Jeff Lynne. Not too bad for Petty and Lynne as ‘Stay With Me’ has been sold to more than 3.5m fans. 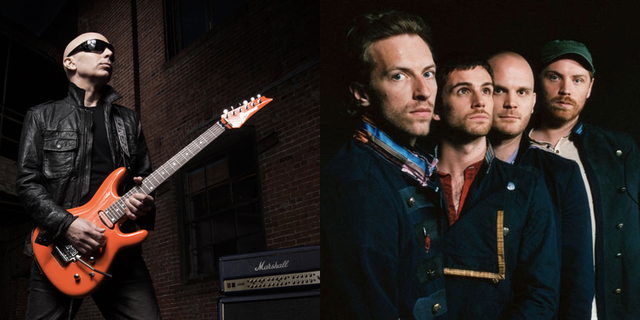 Coldplay landed themselves in a bit of drama in 2005 after labelling themselves as "being incredibly good plagiarists" in an interview with Rolling Stone. Their tongue-in-cheek statement became unfortunate fodder when Coldplay released the self-titled single off their fourth album Viva La Vida in 2008. Fans of guitar virtuoso Joe Satriani were noticeably upset with the resulting track, as despite it being a tribute to Frida Kahlo’s resilience in her long suffering pain, it sounded like a poorly done rendition of Satriani’s ‘If I Could Fly’.

The verse of ‘Viva La Vida’ does share the tempo, rhythm and melody with the chorus of Satriani’s 2004 track. Satriani describes the experience of hearing Coldplay’s track for the first time as a ‘dagger (that) went right through my heart’, the hurt and anger which led to a lawsuit filed for damages and profits from the track.

The cross examining of music theories showed the chord progression being close to identical with the exception of the opening chord in ‘Viva La Vida’, which starts from the sixth instead of the fourth. Essentially, this technique is called a diatonic chord substitution — replacing a chord with another from the same key and allows the establishing of a similar sound and emotions attached to it.

Verdict: Plagiarism! Not to mention, they have already admitted their misdeeds before. While fans of Coldplay will insist that the tracks are nothing alike, the band decided on settling the case out of court with Satriani. While no official figures were shown to the public, we are certain it must have been a substantial amount considering the track’s success (‘Viva La Vida’ received 6x platinum in the United States alone).

The Hollies Vs. Radiohead 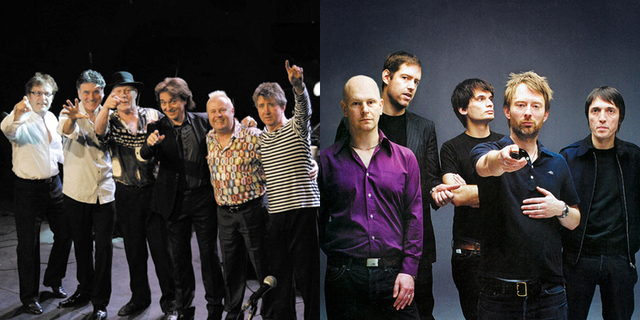 ‘Creep’, the well-distinguished track from alternative rock luminaries Radiohead received the boot from its live set list for most part of the 90’s, after realising their fans were there primarily for this stand-out track — there's plenty more to like in their discography anyway. While the tune was pulled from their repertoire, another possible reason for Thom Yorke’s disdain of ‘Creep’ could be a court case with the original writers of The Hollies’ hit, ‘The Air That I Breathe’ in the early 90’s.

The track was written by Albert Hammond and Mike Hazlewood for The Hollies in 1972 and went on to hit #2 on the UK charts in 1974. Realising that a similar chord progression was adopted in the similarly successful 'Creep', Hammond and Hazlewood filed a lawsuit against the band and succeeded in attaining credits as co-writers for ‘Creep’ in the liner notes of Pablo Honey and a split in royalties.

Verdict: Debatable. While it’s a score for the Hammond and Hazlewood families twenty years after their work in the studios, it was tough on the alternative rock band considering how their plagiarism is based on a chord progression that consists of four basic notes in the G-major family. We find it hard-pressed to call it plagiarism and more inclined to putting it down on absolute pure-f**king-coincidence.