Looks like boybands will never die. With Backstreet Boys already on the way to Singapore next month, Midas Promotion will up the nostalgia factor with Boyzone on May 23. Formed by renowned entertainment manager Louis Walsh, Boyzone came to be one of the most successful boybands in the world. The band split at the end of 1999, played their last sell out show in January 2000, and reformed in 2007.

Sadly in 2009, the band lost one of its members, Steven Gately, who passed away. Steven left the four remaining members lost and grieving but Ronan, Shane, Mikey and Keith decided to continue their musical journey around the world.

As they all agree, “It seems crazy that 22 years have passed since we first got together but we are as excited now as we were back then. Long may this incredible journey continue.” 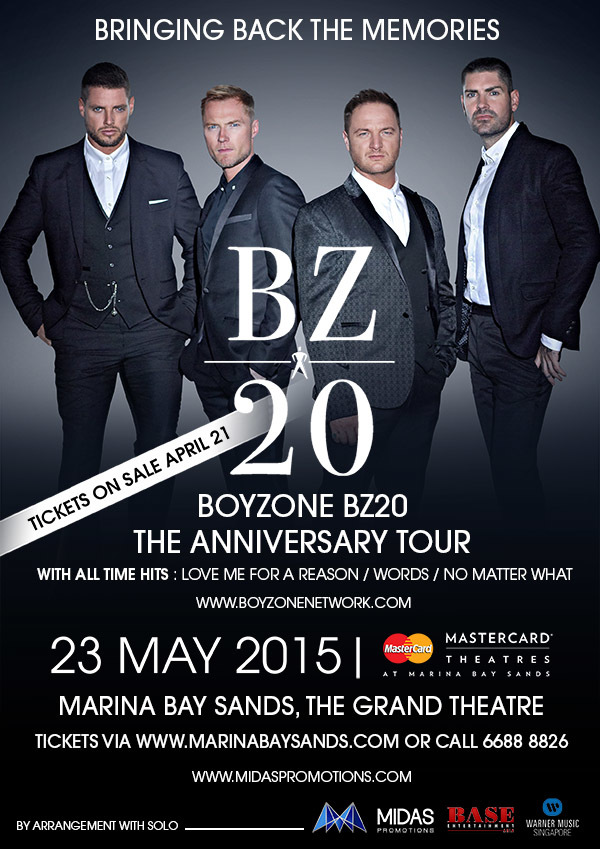 I remember my mother making me listen to an 'Avex Trax' remix of this song and saying it's a favourite of the ah bengs in the clubs, how she knows of this information I do not know. Still, definitely a song parents will love.

Cheesy and heartfelt, and slow. This is what sophisticated music in the 90s feels like.

Love Me For A Reason

Originally by the OG boyband The Osmonds, also definitely a hit with mothers and parents everywhere. I am fond of Boyzone but the lyrics "don't love me for fun girl/ let me be the one girl/ love me for a reason/ let the reason be love" has got to be one of the cringiest lines in history.

Quintessential Boyzone, with the matchy-matchy outfits, lovelorn lyrics, and calling of love interest as 'lady', it's a classic. May or may not still jam to this song in the comforts of the karaoke lounge.

Baby Can I Hold You Tonight

Employs the popular video concept of being in different rooms with a one-way mirror and getting restless and sad. Unless you're Stephen Gately who is looking winsome and keeps looking into the camera.

I Love The Way You Love Me

The mandatory fan appreciation video - a montage of live shows and BTS tour videos and fan meet and greets. Every boyband has one, unless you're One Direction (they have one million of such videos). I love this song because it has the classic boyband bridge. Beaut.