Double birthday celebrations are special and this August proved that joy indeed comes in pairs. Barely a week after our nation turned 48, this past weekend marked the second anniversary of Hood Bar and Cafe’s Saturday Original Sessions (S.O.S). Staying true to their mission to provide a platform for indie bands to showcase their music, last Saturday’s solid line-up of local musicians promised to be an event not to be missed.

A live music venue and bar tucked away on the fifth floor of Bugis+, I was immediately drawn to the eye-catching psychedelic street art mural on the stage wall upon walking in. Flashing pink, purple and white, it would continue to be illuminated by lights throughout the night. The atmosphere was relaxed and inviting, and there were several groups dining in anticipation of the event. I settled down and was all set for a night of good music and vibes. 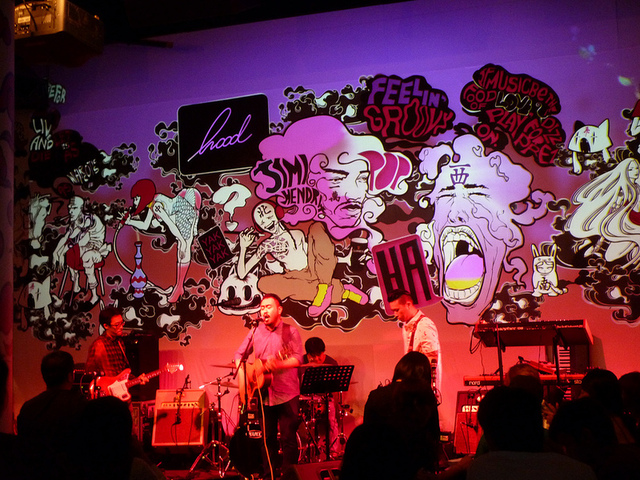 First up was folk singer-songwriter Nick Chim who has been playing music since 1999. Though he records as a solo artist he was flanked by a backing band on this occasion, resulting in his songs sounding richer and more robust than on record. Exploring topics such as love and cats, his was a set filled with sensitive melodies and heartfelt ballads such as “Our Love Has Grown So Cold” and “I Want You Again”.

Pop rock duo Jack and Rai were next and they were in fine form as evidenced from their energetic set. A mix of catchy feel-good pop songs and soft acoustic ballads, they showed they’ve come a long way since their formation in 2002. The fast-talking pair got the crowd laughing with their trademark comedic quips and jokes. In keeping with the spirit of National Day they played “Voice of Harmony”, a song they wrote about racial harmony for the Orange Ribbon Project, before ending on an upbeat note with a cover of “Superstitious” by Stevie Wonder.

Prog-rock instrumentalist band In Each Hand A Cutlass took to the stage to deliver a tight set that conjured up dreamy soundscapes in one’s mind. They had the honour of garnering the biggest audience out of all the acts performing that evening and had many attendees on their feet swaying to their layered compositions. Uplifting, groovy, enchanting and above all emotional, it was a powerful hard-hitting dose of aural intensity – no words necessary. 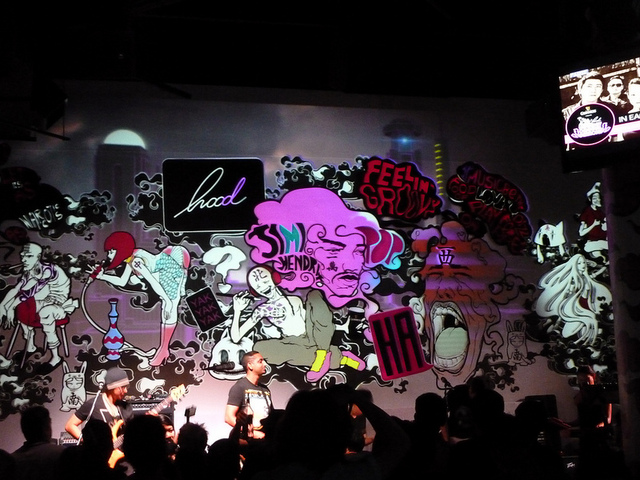 Ugly In The Morning was the second-last act to perform and though the crowd had thinned by now, there were some enthusiastic diehard fans clustered in front. Joined by Hood Bar owner Clement Yang on bass, it was a rollicking ride from the start with the five piece band serving up their funk, soul and rock-infused songs, including their single “Me, Not Humphrey At 23”. There was a touch of poignancy about the set as it was singer Eric Lee’s last gig with the band, but he managed to inject some humour into the occasion by exhorting everyone “for the f*cking last time” to buy the merchandise.

Closing the evening’s celebrations was acclaimed turntabalist Koflow who took to the decks to drop eclectic beats and experimental hip hop from his repertoire of originals. With that so ended the second birthday bash of S.O.S., and if this gig was any indication we can surely look forward to many more smashing gigs in the future.