There was a healthy amount of rebellious chatter that clung onto the Broadrick Secondary students despite their disciplinary master's best efforts. It was a familiar setting as I took time to reminisce on my secondary school days. I smiled to myself, glad that some things don't change. You will never be able to truly silence a crowd by just looking stern and ordering it. As teenagers, we do everything we can to laugh in the face of institutionalisation and say "you can contain us, but you can never control us."

That is, until DJ Kimberly from 987FM took the stage. She immediately grabbed the crowd's attention with her cheerful and spritely demeanor. When asked to whip out their phones, the entire school was more than happy to oblige, eager to bend the no-phone-during-school rule.

As the curtains opened for the first act, local indie rock band Stopgap’s front man Adin Kindermann confidently pipped out with his comically energetic disposition. It was evident from the band's effortlessly spontaneous on-stage banter that this bunch of best friends have incredible chemistry even off-stage, which translates into their music. They opened strongly with their recognisable single ‘Bender’, with bassist Grayson Seah jumping up and down whilst still keeping control over his instrument. 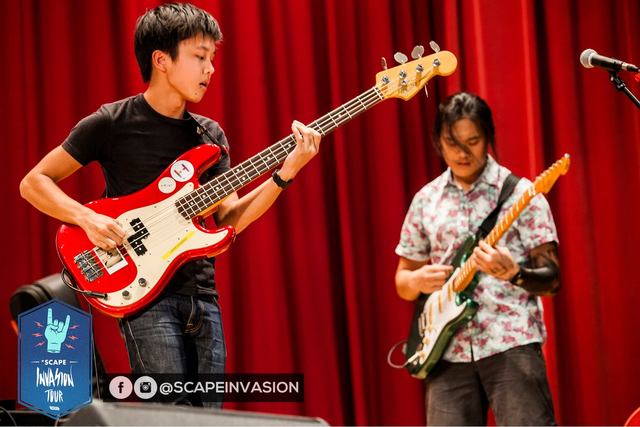 The band ended their set with ‘Crossing Swords’ - an addictive tune filled with intricate guitar riffs and bass lines, crispy drum beats and powerful vocal belts that effectively threw the crowd into a chaotic frenzy before pulling them back with a mellow major seven chord. The rousing rendition of ‘Crossing Swords’ had every student and teacher’s attention. 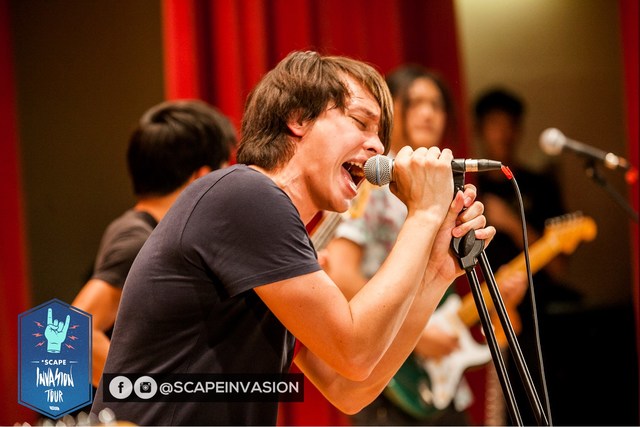 After the set, the boys playfully asked the students if any of them harboured musical ambitions and got the response of one shy bespectacled individual who was singled out by Stopgap’s guitarist, Calvin Phua for praise.

Singer song-writer Inch Chua, who is no stranger to the local music scene, took the stage next and gave an enlightening talk about her journey as a musician. Her informative chat was received with eagerness by the audience - one of whom admitted to being an aspiring YouTuber and singer herself. She encouraged the 13 to 16-year-old crowd with wise words; telling them that "No good endeavour comes without a cost", and egging them on to pursue their dreams and their passions. 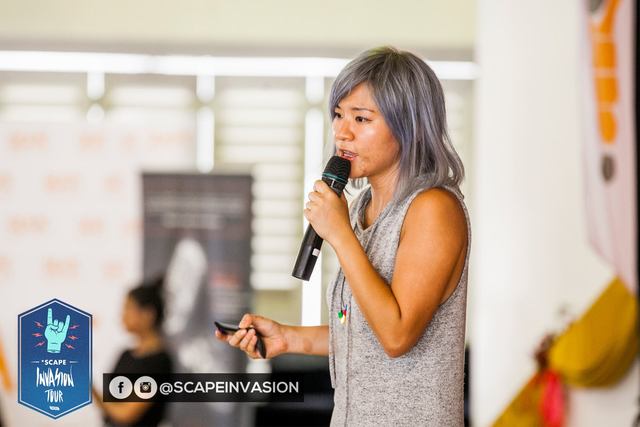 "No good endeavour comes without a cost."

The hour-long concert ended with the ever brilliant Michaela Therese, who took the stage with bassist, Tim De Cotta, and drummer, Anson Koh. Even though she only had time for one song, Michaela put her heart and soul into singing, rapping and playing her keyboard, which she made look effortless. 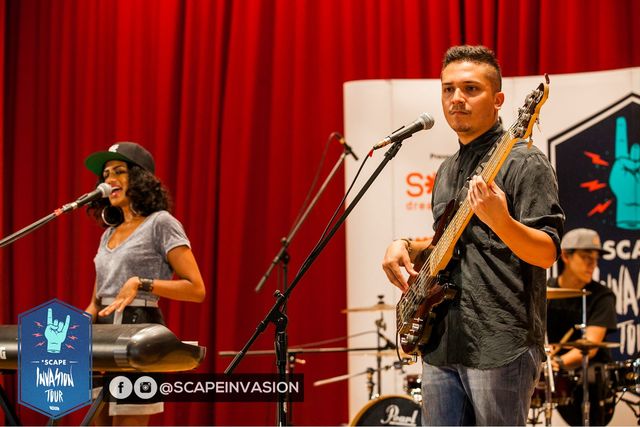 She filled the entire auditorium with good feels and soulful vibes with her latest single ‘Make You Think’, a jazzy neo-soul number that will make anyone’s head nod and heart dance. Her ever-infectious rhythm and passion seemed to billow over the crowd. Within seconds, Michaela had a handful of students synchronically swaying their shoulders left and right to the beat of her music. 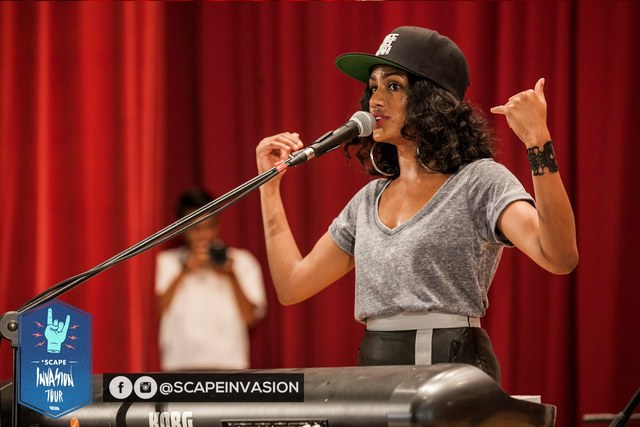 It was a good day for local music as the students filtered out of the hall. Their chatter was filled with a sense of awe and respect for the music they had just been given the privilege to experience.

Asking a handful of students who walked past me what they thought of the bands, they chirped that they were "sick" with all the positive connotations a teenager can imply to a word that would otherwise mean something else altogether.

One girl, who was taking a photo with the youthful looking Grayson, expressed her disappointment after finding out his real age and exclaimed, “I thought you were cute, but you’re old!” 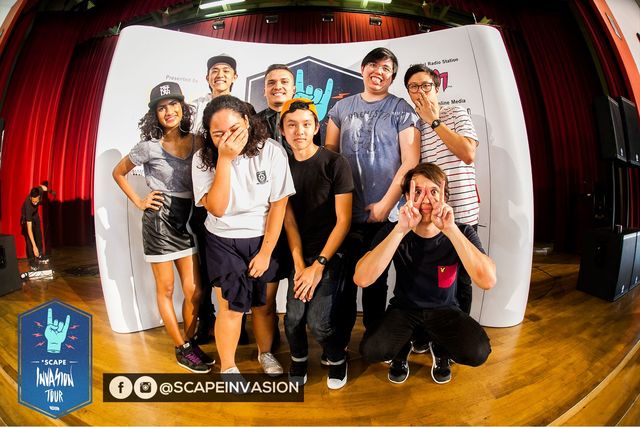 "I thought you were cute, but you're old!"

The conversations exchanged by the students seemed to have changed from just an hour ago as I picked up friends talking about their future professions and their perceivably "impractical" dreams. It got me thinking about what I wanted to be when I was their age and well, I'm not a celebrity veterinarian working for the Australian zoo. But I am perfectly contented doing what I do now.

I had a chance to sit down with Stopgap, most of whom I had spent my secondary school days with, and found out their thoughts about school, local music and the future.

How does it feel playing for a bunch of students knowing you were a part of that environment not too long ago?

Grayson Seah (bassist): It's still pretty fresh in my memory but I'm glad I can come here and give them something interesting instead of some boring talk about drugs.

Adin Kindermann (vocalist): Exactly. It's nice bringing something that feels and sounds good. 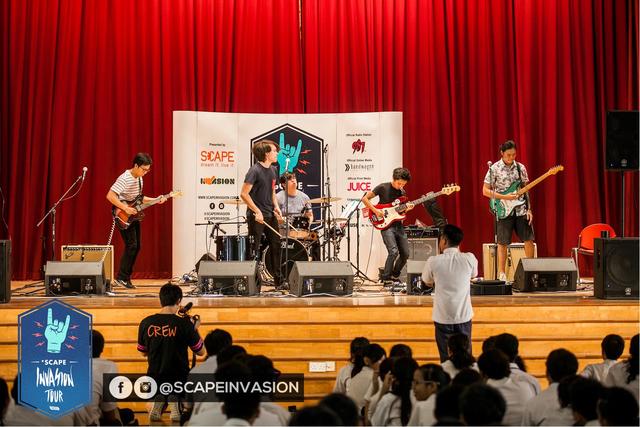 Did you see yourself doing music as a profession when you were that age?

AK: I don't even think we are doing it as a profession now.

GS: Back then it was a lot more difficult. To people, doing music for a living was just a straight up no because you would never make it. Like local movies, local music, local everything; I mean who would support? But it's a lot more open now.

How do you think the local music scene has grown since 10 years ago?

Calvin Phua (guitarist): The attitude towards musicians have changed. Now it's a bit more inclusive. Maybe eight years ago it was still very exclusive because not a lot of people did it.

GS: Last time, I think you wouldn't expect local bands to be playing at major national events and all.

CP: Especially in the context of *SCAPE Invasion Tour because 2009 is when they started the scene and now it's a lot better.

GS: The barrier to entry is definitely way lower. You can just write a song and have it online next week.

AK: There's also a lot more genres popping up as well. It's like a buffet. 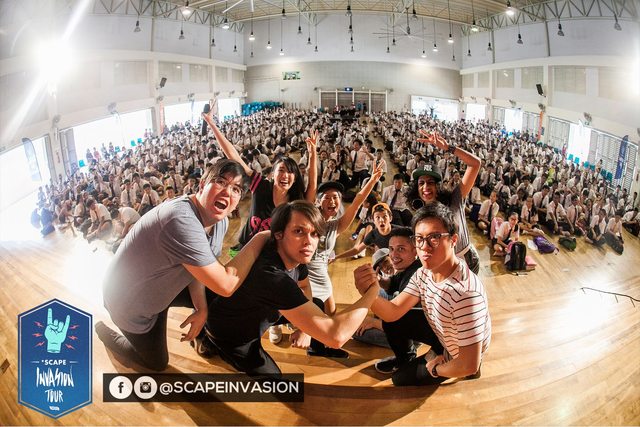 Do you feel like you are educating these students on local music?

GS: Not really. I don't expect them to learn anything from this, but it's like (the movie) Inception. If they enjoy it, then maybe somewhere inside their heads they will be like ‘I want to do this’.

Eldad Leong (drummer): It's more of an introduction because they have to be involved in the scene also. It's like when you're younger then you go to a concert and you feel like you want to do music. It's the same thing.

GS: Like our previous show, we played in Ang Mo Kio Secondary School and there's this newly formed band that literally said that it was because of our (Stopgap) set that they were inspired to form.

CP: You can tell they love music.

GS: Yeah just from a simple three-song set, it can turn into something else.

CP: As long as one out of a thousand is affected then the other 999 don't matter.

GS: You can be sure that someone's going to go home and Google Stopgap or Michaela and then from the related searches they will find other bands. That's their jumping off point already.

What would you say to students who aspire to be musicians? 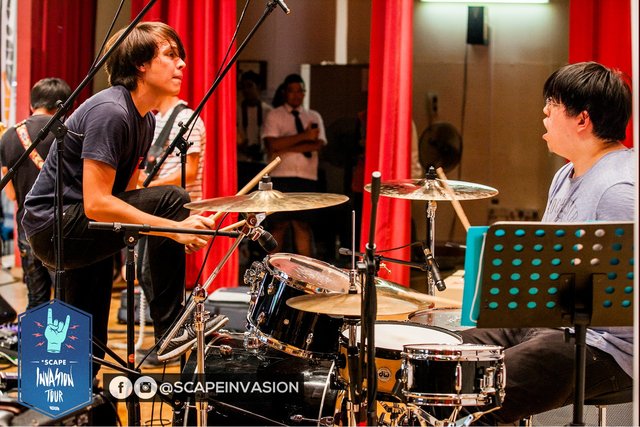 If you can send a message to your 16-year-old self, what would you say?

GS: Don't be afraid to do different things. You will find your group.

CP: Don't do anything I wouldn't.

CP: You can do anything. All you have to do is believe.