With the amount of love shown over the course of the entire *SCAPE Invasion Tour, you’d be forgiven for thinking that this would be like every other stop.

In the cool school hall where rusty propelled fans operate and worn wood floors get trotted on, it seems as though nothing significant has changed over the last couple of years. But with social media the chosen medium of modern society, news has never travelled this fast.

So when the *SCAPE Invasion team posted an update on the artist roster for CHIJ Katong Convent, the school went into breakdown mode — students were scheduling trips to Art Friend outlets and school bookshops to scour for materials for their self-made proclamations of love. But if there was any indication that this show was to be like no other dates on the *SCAPE Invasion Tour, we saw departments of teachers turn into auxiliary police squads, manning the area before the stage. The *SCAPE Invasion Tour has never seen such a reception before. 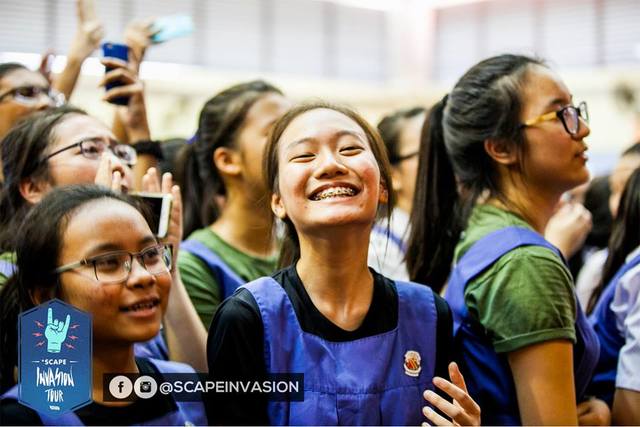 ‘You girls are so awesome but you know how I know that? It’s because I was a KC girl once!’, breaking from thick velvety curtains,*SCAPE Invasion host Kimberley Wang reveals herself to absolute enthusiasm, a fitting homecoming for the 987fm DJ. After all, having an afternoon to reminisce over old tuckshop food, classmates in pinafores and ex-teachers make for an interesting retrospection. Having an ex-student to return to the stage as a successful DJ makes for great conversation— as the students gush about their newfound respect for the bubbly personality while the teachers start chattering amongst in hush-hush tones.

Aside from their previous show at Jurong West Secondary School, this would be The Summer State’s second appearance on the tour. The band is silly and fun as they trade mid-air jumps and loud mean guitars for an enthusiastic response from the crowd. By this time, the girls have already readied themselves by getting up on their feet in preparation for the massive throw down from the pop-punk band. The response to ‘I Do and I Don’t’ is an intense roar and a wave-along led by lead singer Bryan Ulric, who teased the crowd by name slipping the next act in his profuse thanks. 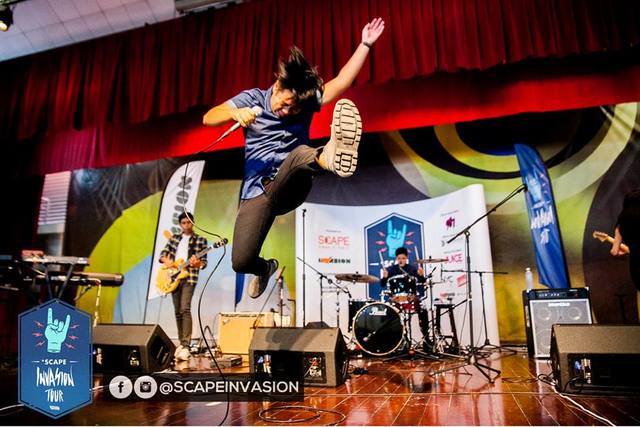 Since his major EP launch at TAB less than a year ago, Joel Tan aka Gentle Bones has been riding on a towering wave of success. This could be in part credited to his boyish smile and bashful personality from behind the acoustic strings, but his modest yet overwrought writings from his teenage years is the tip that triangulates and shapes him into the affable, courteous and gallant man the pinafore-wearing crowd swoons over.

There was chaos — even in the space between songs when Joel takes to catch his breath. The CHIJ crowd, fought back by valiant teachers and a good-humoured vice principal who doubled up as head of security, were hot and bothered by their inability to catch a glimpse at the stage. The lucky few stuck out proclamations of love; Joel’s name spelt out on four paper plates in red sharpie, a banner with ’GENTLE BONES’ written in sharp black fonts on three drawing blocks stuck together with tape and many other cardboard hold ups with plenty of hearts and plenty of love to go around. 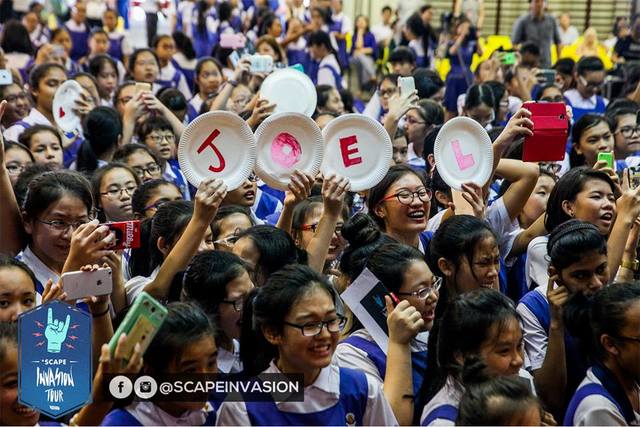 In ‘Settle Down’, Joel cracks a wide smile as he chirps the title back to the crowd in the final reverse. The crowd expectedly turns down and dismisses his cheeky attempts by sticking together and roaring back in a discordant manner.

‘Until We Die’, the recognisable acoustic ditty that pinches at great hope and optimism for the future, brought most of the crowd to song in unison like a determined choir. The notion of buoyancy is something the Katong Convent girls can relate to, following rigorous hours in preparation for their examinations — for them to sing loud and proud is a well-deserved serenade to edge them to realise their expectations. 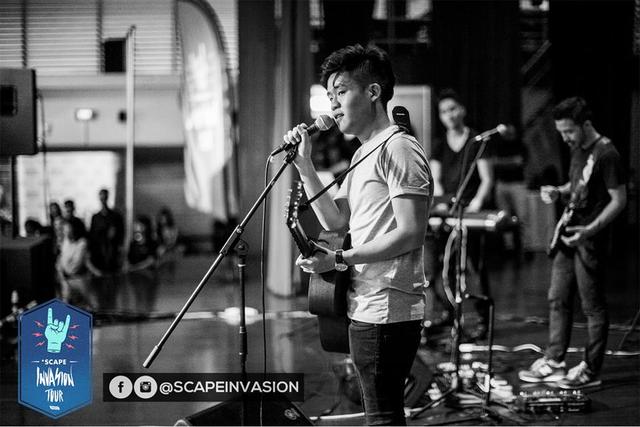 Apart from the musical ingenuity onstage before the KC crowd, there was an exchange of advice from one musician to another. Hyder Albar, who doubles as drummer to West Grand Boulevard and co-founder of Invasion Singapore, gave a worthy speech on the value of collaboration between artists. ‘Photographers need to work with musicians, who need to work with designers. So you need to work together right now.’

From behind the stage in a quiet music room filled with brass instruments and boxy drums, Joel sat across from me on yellow miniature chairs, pensive while spelling out the past few months of unbridled success.

‘It's quite crazy. I really didn’t expect to play anything like this. They are a lot louder, but there is less screaming and more singing. I guess you feed off the energy the crowd provides. The crowd today was really loud and I felt energised and generated that back to the crowd.’

‘I did music for the girls in the past. When I went to JC, I first did it for the girls, but I really enjoyed writing my own songs and I switched sides to focus primarily on being an artist.’ 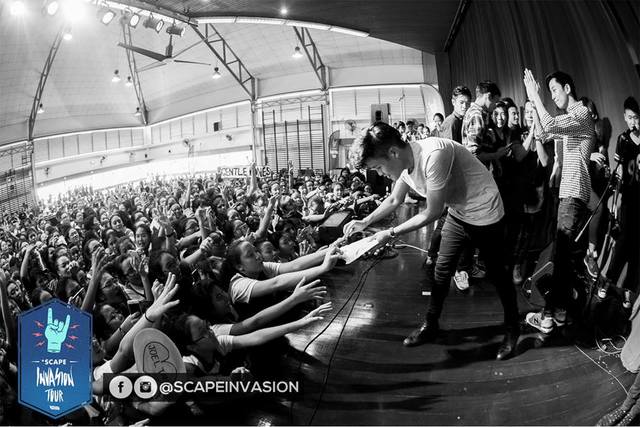 ‘I base my songs on real life experiences; family, friendships, relationships. The standard stuff basically and we continue on from there and work out the nicest stories.’

‘I didn’t have to take ‘O’ levels in the past as I was in Hwa Chong throughout my six years. I don’t ever study a lot so I just scraped by. I was quite a good kid actually. It was all the typical boy school stuff. If I did something bad last time in Hwa Chong, it wasn’t all that crazy elsewhere y’know.’

‘The music that I created was written when I was 17 to 19, that was the period when I was still dealing with my ‘A’ levels. It is the time when you start to question life a bit because you’re studying so much and you tend to rebel with your friends a bit. The EP for me was kind of like a time capsule as to how I was like a person before. I have since grown a lot from there, but I find it a true time of my life. 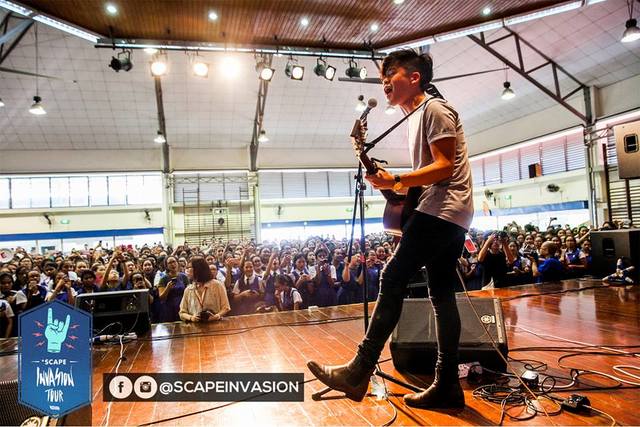 On the Future of Local Music:

‘We have a very diverse market right now. Over the years, younger kids should see the different ways of music that we have to offer and learn from them, and come up with a better genre that can stand a chance with the industry. I hope what we are doing is like paying it forward I guess.’

‘I guess you just have to give it a go and always give things a shot. A lot of kids would ask me how do I do this or how do I do that? But it is not really about finding a fixed way to follow and do shows. It is all about picking up opportunities along the way and figuring it along the way. Taking the first step is important!’