Nanyang Polytechnic is buzzing, the student body skipping from one booth to another in celebration of Singapore’s jubilee year.

Here, booths feature both traditional and unique modern games to show the various local delicacies on offer, set up to proudly exhibit the storied and colourful history of Singapore. Following which, a skit that shows the intricate relationship between grandmother, grandson and girlfriend starts. With its underlying message of a celebratory one (the SG50 kind), it erupts into yet another bout of jovial patriotism, singing ‘We Are Singapore’.

There are also plenty of Singapore flags proudly brandished by students — if you haven't gotten the point yet.

Joie Tan takes the stage with her guitarist Sures and drummer Melvin, a reunion of sorts as the three of them recently graduated with a Diploma in Music from LASALLE College of the Arts. In the *SCAPE Invasion Tour of Nanyang Polytechnic, Joie is given a full hour to show her chops and she takes charge of the duration like a seasoned performer. Even with a dynamic three-day lineup that consisted of ShiGGa Shay, THELIONCITYBOY and HubbaBubbas, Joie's unwaveringly radiant personality was a standout. 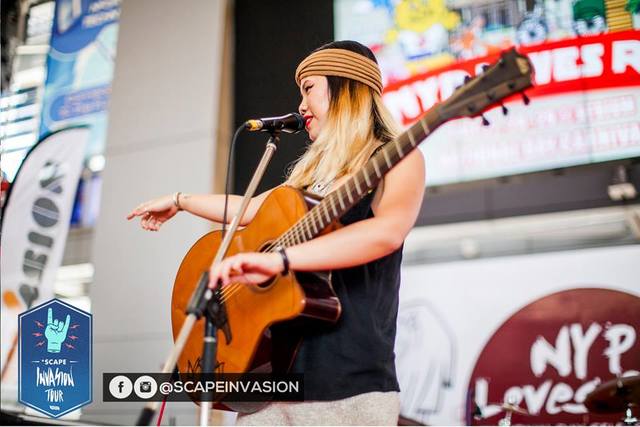 Throughout the set, Joie spins a few of her favourite tracks off her iPod, giving each a personal flavour through some unique rearrangements with her band. In ‘Thinkin’ Out Loud’, Joie starts off on a breezy pace, spreads her wings with slight tenacity in her chorus and draws the final verse an octave higher, leaving her audience startled by this variation off the usual pacifying tune.

This unique approach left many in the audience perplexed but guitarist Sures believes it comes natural and necessary, stating “Every song is like a feeling and since artists feel differently every day, we are always actively changing up song arrangements.”

"I want people to hear my music and understand what I was feeling at that point and hopefully help them to deal with it or bring them back to that exact memory."

Being in the midst of all things SG50 in the NYP auditorium, it only seemed fitting to pay tribute to the motherland. Joie surmounts a patriotic effort with a slowed rendition of ‘Home’. There was movement within the grounds swashed with distinct shades of red and white — students walking between booths celebrating the local culture and of course free tu-tu kueh. 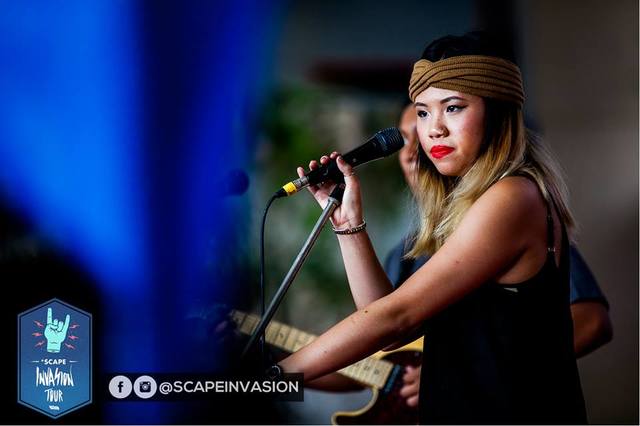 They were now swaying in unison to her gentle voice, with their eyes rooted to the imaginary Singapore flag next to her. Covers of National Day songs are often seen as a crafty ploy to profit from, but as Joie belted the popular tune with the same hopeful and reminiscing voice of Kit Chan, it seemed awfully hard to believe so.

National Day covers aside, Joie’s originals, however, speak as ‘melodious journal entries’ of actual events that have affected her dearly. One of the tracks titled ‘Abandoned’ is a disheartening song written about her friend’s dad who walked out on him. As with most artists that deal with distress, they write. Feeling perplexed with the inability to feel or reason with the abandonment of a huge figure in life for her friend, Joie penned a song as catharsis to deal with her pent-up anger. Months later, streams of tears are regular occurrences whenever she plays it.

The set sailed by fast and found itself at its end, receiving a warm reaction with echoes of applause and a solitary whoo within the seemingly infinite fleeting crowd, of which many stayed. To that solitary whoo, Joie responded with her characteristic charm, “Aw thank you one person who whoo-ed”.

On school experiences that shaped their career as performers:

Joie: In LASALLE, we had this class where we would practice a song and perform it at the end of the week for the teachers to critique us. Our teacher was telling us about Sara Wee from 52A who would dress up like Iggy Pop and Axl Rose for her performances. I was very inspired since then to dress up for parts. After being assigned a Stevie Wonder track, I got into character with the whole get up and I wore sunglasses which was rude but at the point I thought otherwise. My teacher insisted I take the glasses off and I couldn’t finish the rest of the song properly. I learnt to respect the artist and make sure what you are doing is tactful. I learnt it the hard way.

Sures: When I auditioned for LASALLE, I didn’t know a single bit of theory but got through from playing by ear. In the first week of school, my teacher asked the four guitarists in class to play the g-major scale, which is a simple feat for most guitarists, but at the back of my head, I was panicking as I didn’t know theory. The other three started to play and I tried imitating them and picking it up by ear. It was embarrassing and from there, kickstarting my career by teaching me the importance of maintaining a balance between passion and technical skills.

Joie: When I hear artists write songs like ‘Hero’ and ‘Last Friday Night’, I would love to write an anthem that people can sing wherever they go, but I feel like I’m not at that point in my life where I can relate to a song like that yet. So I’ve been writing songs that read like diary entries. I feel that that is my identity as a musician in a way. I want people to hear my music and understand what I was feeling at that point and hopefully help them to deal with it or bring them back to that exact memory.

On advice to young musicians:

Joie: I get a lot of questions about people wanting to start YouTube covers. I started with an eraser on a webcam as I didn’t want to show my face. If  you don’t want to show your face, use Soundcloud. I find that music is all about taking steps and trusting that it is going to be ok. If it doesn’t work out, it doesn’t. But you can take comfort in the fact that you tried. Most people believe that to make it in music, you have to quit everything and go. That was something I did and I flunk my ‘O’ Levels. A part of me wish I had that back-up, I still want to sustain a family and I don’t know if music is going to work out for me always. It is good to have something behind but always push for a dream. Don’t be scared to work and push for music at the same time.

On musicians in Singapore:

Joie: I think being a singer-songwriter in Singapore isn’t easy. I mean nothing is easy, even being a banker can’t be easy as well. There is competition everywhere. But I feel like if you really want something, you will be able to do it. I find it difficult as opportunities come and go. My future feels bleak because I’m not sure if there’s a place for me in the music scene forever. I don’t know when my peak is and I won’t ever know when my peak will be or if I have hit it yet.

Melvin: I think the market of people playing music is huge and over the years it has grown much more. It is not easy because you have to be the best to take a spot in the local scene. There are a lot of talent people all around but it is all about the timing, luck and confidence too. It is honestly a gamble in every job that you do, but for the art scene, they are always big gambles - one step could change your career drastically for better or for worse.