The best type of parties are house parties. All that fun, people you actually know and in the comfort of familiar settings. Mark your calendars for October 5 as SGMUSO will be throwing a House Party where all of you are invited! Spanning throughout the entire Saturday, the house party will consist of fun activities, a discussion panel, live music performances and even a film screening or two.

With over 20 acts to catch and two stages at the Aliwal Arts Centre, it'll be a festival of sorts. Take your pick with the variety of genres you can get at the show, from hip-hop to acoustic pop, SGMUSO's House Party has got it all covered. We check out 5 acts we are most looking forward to.

It's been a while since we've seen this songbird take the stage. Well versed in the genres of RnB, Soul and Funk, and even incorporating these elements into cover songs, Aarika is one to delight the crowd this weekend. Also a serial collaborator, keep an eye out for some exciting collaborations on that day!

Highly influenced by a multitude of genres, you can hear neo-soul, folk and rock in his music. We last saw this talented musician at the Singapore Night Festival where he successfully managed to make a crowd swoon and dance. Simultaneously.

Always a great act to catch live, Kevin Lester is energetic and expressive onstage. Clever rhymes and catchy beats, this Lion City Boy is bringing his brand of hip hop to bigger audiences, having already extensively toured North America and putting Singapore on a map. It's probably not a surprise but he's a very eloquent dude, check it out HERE.

A pioneer in the local hip-hop scene, having started out in an R&B outfit Bonafide with Taufik Batisah, and then moving on solo to be a singer and songwriter, producer and rap artiste, Mark Bonafide has a lot of things to be proud about. Including performing in Russia recently. Ask him all about it this weekend where he will be playing a rare acoustic set.

Forget Singapore Idol, this is another artiste on this roster who has also performed in a festival in Russia. Somehow, the eclectic mix of Kevin Lester, Aarika Lee, Bani Haykal and Sezairi have also collaborated. His single 'Sayang' released this year has garnered him a bunch of new fans. Laid back, soulful and sweet, let's hope he'll dropping a couple of new tunes as well this weekend!

Watch, listen and even participate in the panel discussions that will be held that day. SGMUSO have specially selected individuals relevant in the industry to share their thoughts and vision and lend their advice on topics such as Digital Distribution, Honing Artistic Visions, and How To Prepare a Killer Press Release. Some notable names on the panels are, Vanessa Fernandez (Vandetta/Octover), Kevin Lester, Deezer, Spotify, and entertainment writer Zul Andra. You'll be sure to take home some wisdom and knowledge from these discussions.

*To note: Limited seats only per panel, email info@sgmuso.org with your name and contact details to reserve your seat now, with the preferred panel as your email subject. You are also free to attend more than 1 panel!

Sit back and enjoy some film screenings, featuring two documentaries on local music. 'Here We Are' explores the nitty gritty of the Singapore music scene and features some prominent faces and names such as Inch Chua, Graham Perkins, Kevin Lester, Caracal, These Brittle Bones, Leonard Soosay, Monster Cat, and... also us, Bandwagon! Featuring pioneers of the Singapore post-rock scene, I Am David Sparkle, the 55-minute film 'Ignore All Detour Signs' documents the struggles and experience the band went through to raise enough funds to get in SXSW Festival in 2009. Passionate and inspiring, is also a poignant commentary on the music scene and business.

There's gonna be something for everyone this weekend at the SGMUSO House Party, happening at Aliwal Arts Centre from 2pm onwards. Study the schedule below and we'll see you there! 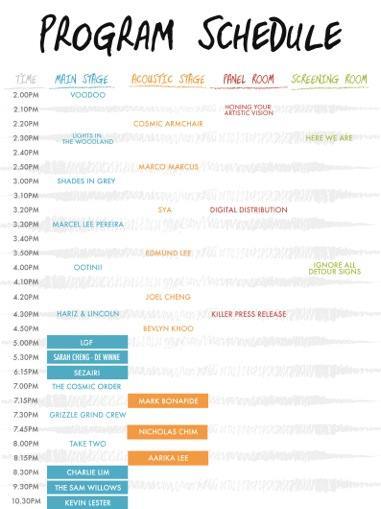