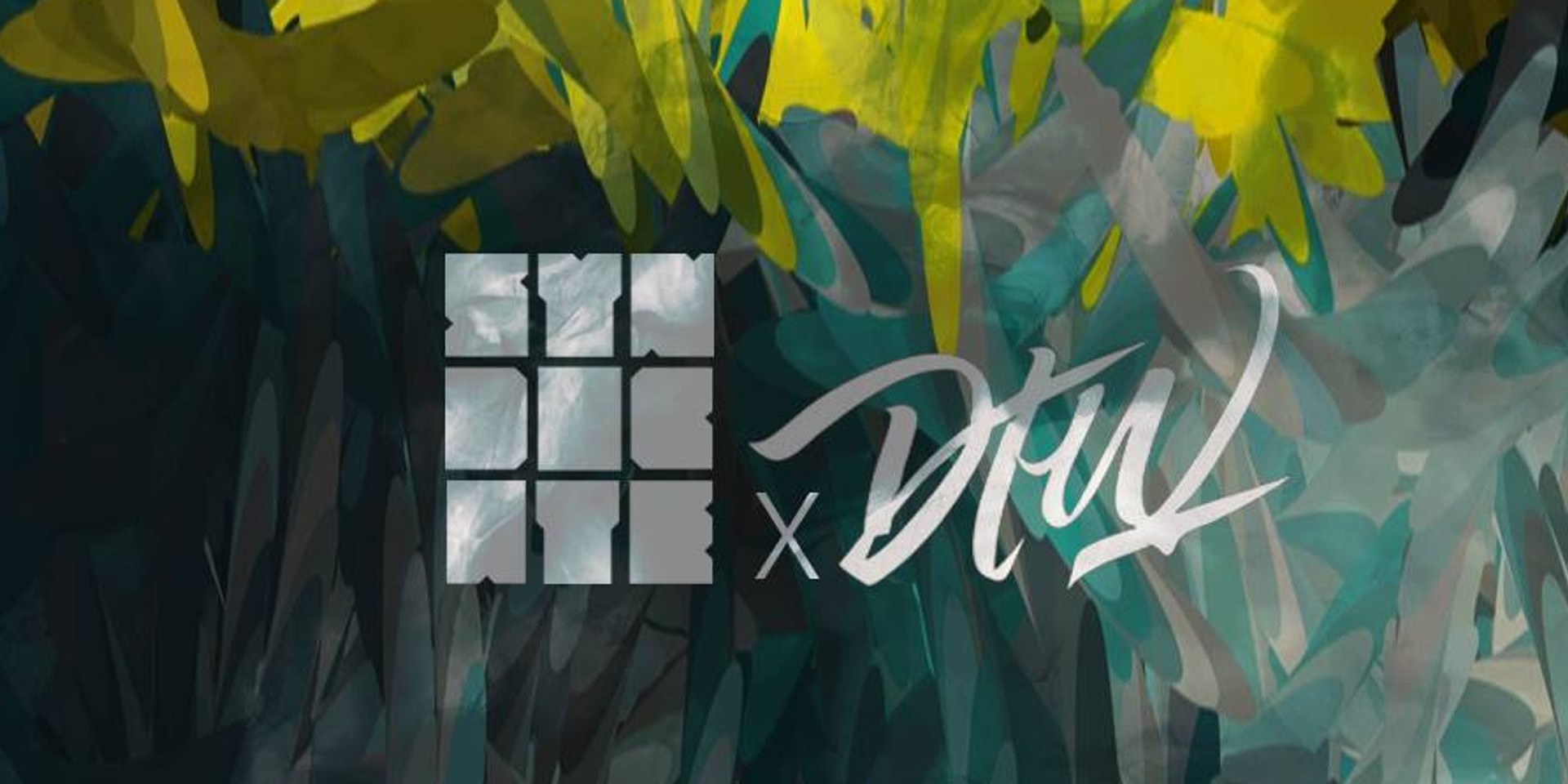 "We move" reads the foundational motto for Darker Than Wax, a record label and collective founded in Singapore, dedicated to spreading quality music through digital platforms and live shows.

And, with the ambitious attitudes that come with running an independent label, Darker Than Wax have indeed been making moves around the world, signing international artists and regularly releasing new music on accessible platforms like Bandcamp and Spotify, aided by a sleek consistency in promotion and curation.

"Bandcamp, SoundCloud and the like have allowed labels to be more personal with their followers globally in ways that were never possible back in the days," label co-founder Dean Chew tells us, "and with such proximity, I think it is very crucial for labels to be beacons of positivity and values but most importantly, continue to cultivate creativity and artistic freedom."

The label is set to pair up with collective Syndicate, an indomitable force in Singapore's electronic music scene, for a special showcase at Canvas.

Syndicate, headed by veteran DJs Kiat and Cherry Chan, have operated less like a traditional record label and more like a vibrant, spirited hub for artists to collaborate and produce boundary-pushing work. Music acts like .gif and Intriguant cohabit with visual artists like Brandon Tay and SSYSTM on their sprawling roster, and, more often than not, end up with fruitful collaborations at live shows. "We didn't start out with the idea of being a label rather a collaborative platform that grows somewhat organically," Kiat tells us. "The priority is always to create first from the heart."

Established in 2010, Syndicate's upcoming Canvas showcase will no doubt be another ingenious display of raw ability that has made them a household name since.

Syndicate's Kiat, Darren Dubwise, NADA and kidkanevil will be on hand to perform alongside Darker Than Wax's FUNK BSTRD, William J and NeguimBeats, with visual work by Syndicate's Cherry Chan and SSYSTM, with content contributed by DTW's Black Surrealism.

Before the event on Saturday, we caught up with both label representatives — Kiat and Dean Chew (FUNK BSTRD) — about recent movements and future ambitions.

To celebrate the event, Syndicate has also released a free beat by kidkanevil titled 'Eski Noodle', which you can download here.

How did the Syndicate x Darker Than Wax showcase idea come about?

It came about in the back alley of Chye Seng Huat. We popped by for coffee with Dean and he mentioned that he’s got Neguim coming through in December and asked us if we would be keen to do a joint event with DTW. Coincidentally, Cherry mentioned that Kidkanevil might be in the area and that’s how it happened!"

Syndicate has thrived as a hub for emerging Singaporean artists since 2010. How has the brand evolved since then?

Ironically since we started "thriving", we became pretty busy with our own projects, which we think is a good problem since everyone is constantly working on something. It was nice to see everyone doing what they do best professionally.

Things have also been brewing in the background this year as we are putting in place the release schedule for a couple of special releases which means a lot to me on a personal front. So yeah, watch this space over the next few months."

The Beat Invitational has been a long-held tradition for Syndicate. What has been the most gratifying thing about conducting each edition?

Firstly, credit due to Saf (Safuan Johari, aka Max Lane) for digging up these guys from out of the woodworks with their beats!

For me, it’s really about producers from different styles just coming together in the same venue to listen to each other's music on a system — much better than sending out a SoundCloud link. I think the experience of actually interacting in person brews a lot more possibilities for collaboration just through conversation."

What is one thing you’ve yet to see at a Beat Invitational?

A transgender cat producer who makes music using human samples. But seriously, the breathe of work that i’ve heard is so wide and open, it’s hard to answer that."

Is there an end goal for Syndicate?

How did the Syndicate x Darker Than Wax showcase idea come about?

It was a pretty spontaneous idea really. Both collectives have been on the grind for a minute now, and we just thought a collaboration at some level was inevitable, and since our main artist Neguim recently relocated to Australia from Brazil, we thought it might be cool to have him debut in Singapore as well!"

The label was founded in reverence of the immense influence and reach of black music — as Asian musicians, working with a diverse and multi-racial roster, how does it feel to work within and pay tribute to a culture that was established on the other side of the world?

It feels extremely educational, humbling and gratifying at the same time. Asian culture, especially Singapore has always been about "re-interpretations" in my opinion, and to grow up with black music and applying what we have learnt into our own urban fabric is a very fascinating process."

Darker Than Wax promotes inclusivity in its ethos, and your roster features artists from all around the world. How important was it early in the label’s existence that your roster would feature artists beyond Singapore?

I always maintained a holistic approach, in the sense that the label has to be "glocal" (both global and local simultaneously). Kaye and I were fortunate to build an international network since the early days, and I guess things just evolved organically from there."

What are some of the misconceptions about Darker Than Wax?

The greatest misconception about us is that we are always seen or regarded as "lounge" acts who play "world" music, hence pigeonholing us to a certain time slot for a gig.

We have always been about diversity, playing a huge range of "dancefloor" music but more often than not, it’s a challenge debunking certain pre-conceived notions."

A growing characteristic for certain labels, especially independent labels, is the practice of handling other affairs — eg. publicity, management, etc. — under one house, and curation has also become a growing factor in their success (consistency in sound and vision). Do you think Darker Than Wax fits this, and how do you think the label has room to grow?

Most definitely! In fact, that’s how we grew from day one. Being completely organic, in-house, taking care of every aspect of the label. That’s really the zeitgeist right now, for lack of a better word.

And now that our mechanisms are all in place, the challenge for DTW now is to how to constantly evolve with the shifting times and spot different avenues for extending the brand."

Is there an end goal for Darker Than Wax?

We don’t actually believe in an end game. I personally relish the beauty of the process, and its taken us a long way thus far! But whatever we do, we have to inspire and hopefully, pave the way for others to create positively."

Canvas presents Syndicate x Darker Than Wax Label Showcase is happening on December 16th at Canvas Singapore. Tickets are S$25 for early birds (before 11pm) and S$35 after at the door. 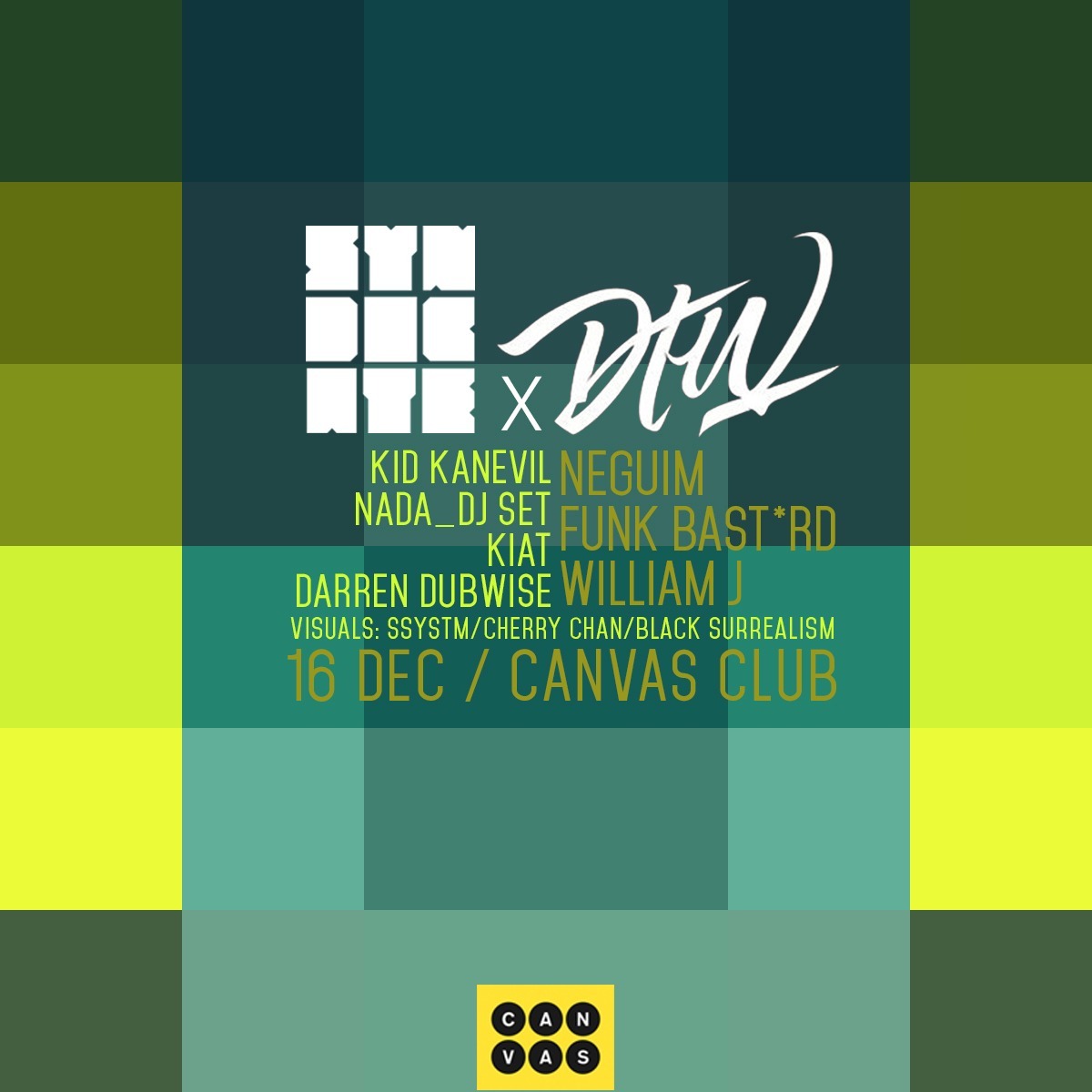