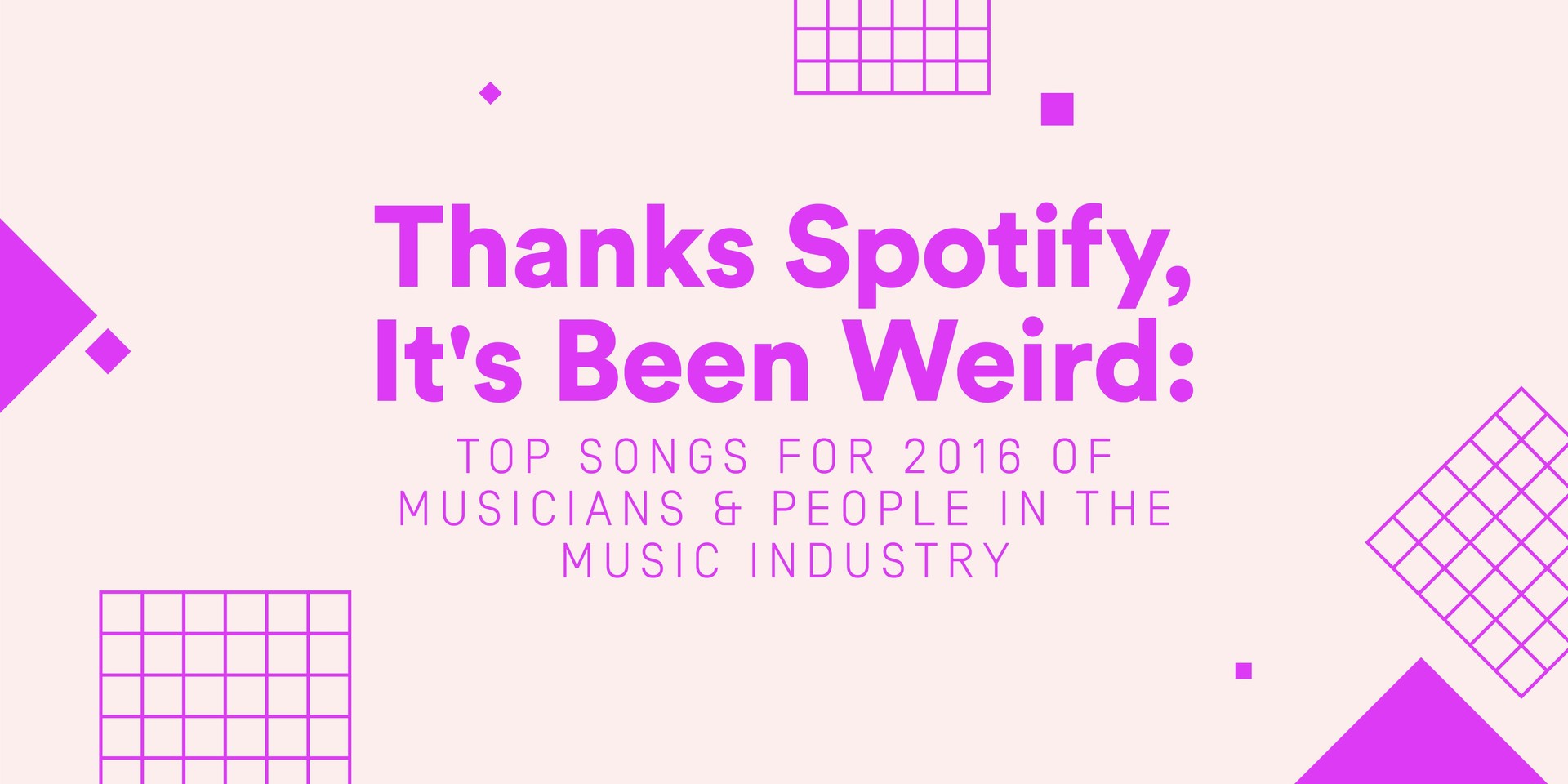 Last week, the Bandwagon Team shamelessly shared our Top 2016 songs on Spotify. We decided to let others in on the fun, so we now present to you the Top Songs of 2016 by some of our local musicians and a few people from the music industry.

This year I was mainly exploring the discographies of Dirty Projectors, Deerhoof, and Talking Heads, but from local files. Spotify is my main platform for looking up music! This year's new favorites are: Masters of the Hemisphere and Sandro Perri. My favorite thing about the app is that I can conveniently browse through jazz and classical recordings.

Bon Iver, Bombay Bicycle Club and The 1975. That was my 2016. Justin Vernon, Jack Steadman and Matty Healy are producers/songwriters that have the unique ability to take a lot of different sounds and squashing them all together to create a masterpiece. I respect them all to the highest degree and wish that I could produce something to that caliber someday.There is a lot of Bon Iver on this playlist because of the fact that I like listening to them during long-haul flights and long drives to the beach or Quezon City (I live in Makati). Bon Iver is my go-to band to get me to forget about the all the road rage, the traffic and, really, the waiting. People say that 3 months of our lives are spent stuck in traffic in the Philippines so, you have to always bring someone special with you throughout the journey. I believe that. Which is why I usually bring my girlfriend and my Bon Iver Spotify playlist wherever I go. My personal favorite songs of the three are Perth - Bon Iver, Luna - Bombay Bicycle Club and I like it when you sleep, for you are so beautiful yet so unaware of it - The 1975. This year, I also tried to explore the post-rock genre and all its forms. Which is funny because while listening to the different post-rock bands in the world, you can start to see who our local Philippine post-rock bands sound like. For example, Tom’s Story sounds like Toe or Chon, and the Sound Architects sound like one of my new favorite bands, Caspian. Aside from that, I’ve been listening to a lot of borderline “Video Game Music”-post-rock bands such as Kubbi and Plini.

There is a lot of Reese Lansangan in this playlist too. I like going back and picking out the lyrics to Reese’s songs and trying not to look it up beforehand. Her songs are very smart, somewhat educational and super funny. She reminds me of Kate Miccuci, but with catchier hooks and gentler humor.

Then lastly, my favorites from way back when. Dave Matthews Band, Lemaitre, Blazo, Last Dinosaurs, John Mayer, Thomas Leeb,... it’s a long list. But yeah, Bon Iver, Bombay Bicycle Club and the 1975 were my ultimate favorites this year.

GIG REPORT: Daniela Andrade rides the waves of Manila for the last leg of her Shore Tour

I hardly get to open my Spotify cause I usually like silence in my room. More often than not I only listen to music in the car. My top songs for 2016 is a mix cause I like driving to songs I can sing to, scream to, or dance to. I’m an emo kid at heard and obviously a big fan of Taking Back Sunday. And I super love singing “My Blue Heaven” at the top of my lungs when I’m driving through traffic.

READ: Red Ninja shows what it takes to have a good time at 2016 Year Ender Fest

I mostly use Spotify to make monthly store playlists for three fashion brands (i.e. Oxygen, Penshoppe, Memo). I've always believed that whatever plays in a store says a lot about your brand, which is why I try to stick to some sort of vibe for each. Depending on what the client asks, a playlist could range from indie pop and electro to a whole lot of pop and top 40s. I think it's a responsibility to be on the pulse of the more popular music (Clean Bandit, LANY, Hailee Steinfeld) when it comes to queuing these up, but at the same time, to share respective tastes that could be hits (Domo Genesis, Theophilus London, Francis and the Lights) or are just worth sharing to the world.

On a more personal note, 2016 music was also about past yet precious intangibles, especially with the release of Oasis's Supersonic documentary and new albums from Nelly Furtado and Britney Spears haha. But of course, these always swirl together with the go-to's like Kid Cudi, Justice, and OK Go. I won't be surprised to see these names every year, really. Thanks for everything and nothing, 2016.

This year, I graduated college, had my first headlining concert, and moved out of the city away from all my closest friends. 2016 was a bittersweet ride. Whenever I find myself alone, I open Spotify and play my current favorite tunes. Here are the top songs that defined my year.

READ: On the Record: The albums that shaped Clara Benin