Up and coming and dressed to the nines, Gareth Fernandez and his band are sure to start the fun at The Music Market 2014. You may know him from his upbeat live performances but this guy is a bit of an old soul, as we find in his chat with the man himself. Before we bring him centre-stage at Hard Rock Cafe where he'll be playing surrounded by countless iconic rock and roll memorabilia for our event, we got to know more about the man, his band, and his dream fantasy festival lineup.

Hey Gareth, you've been a busy man of late! Tell us what you're up to these days.

Well, I’m still working with the band, working on our 4-track EP. Really taking the time to make sure every bit of it sounds awesome. It’s a much longer process than I first imagined, but I know it’ll be worth it. On top of that, I’m planning to do some covers, as well as preparing for some upcoming shows  this August including Ngee Ann Polytechnic’s OOOM, Gentle Bones’ EP Launch, and of course, the Bandwagon’s The Music Market! Lastly, I’m planning for the Subliminal Love MV shoot as we speak. It’s gonna be amazing, so please do watch out for that!

We would like to know more about you and your origin story.

My first gigs were back in junior college when I was still trying to “find” my voice, but my first real performance was back in 2011 with my old band (with the same bassist, incidentally!) at the Esplanade Outdoor Theatre. We were really quite trashy and I told myself that I had to improve TREMENDOUSLY before I ever set foot on such a stage again. In 2012, I was extremely lucky. Notable cover band KINGS was looking for a new lead singer and they decided to give me a shot. After an eventful year of playing the bar circuits like Wala Wala, Balaclava, and Clarke Quay, I decided that I wanted to tell my own story and do my own songs. So I roped in a bunch of crazy amazing musicians into what we now call a “decent proposal”, and BAM! – the Gareth Fernandez Band was born.

Your live shows are always upbeat, lively, and fun to watch - what is the best show you've been too?

I do my best to keep it fresh and up the ante with each subsequent gig so that it’s always fun. I’d have to say that the best show I’ve played so far is definitely the Made in Singapore showcase at Music Matters Live 2014. It was also the night we dropped Subliminal Love! The energy was amazing, the place was packed, the crowd was wild, and it was my first time performing with a horn section. Definitely a night to remember!

As for shows I’ve been to by others: Locally, I’d say Charlie Lim & The Mothership is always a delight to watch. I particularly remember their set at Blu Jaz Café. It was a last minute decision to check it out – full house, with Sezairi and Vandetta among the guest vocalists. Tough for it to get any better than that.

But really, the best show I’ve ever caught LIVE – Bruno Mars & The Hooligans at their Moonshine Jungle Tour. Hands down the best show I have ever watched. The vocals, instrumentation, choreography and the sheer energy and production quality of the show were just mesmerizing. 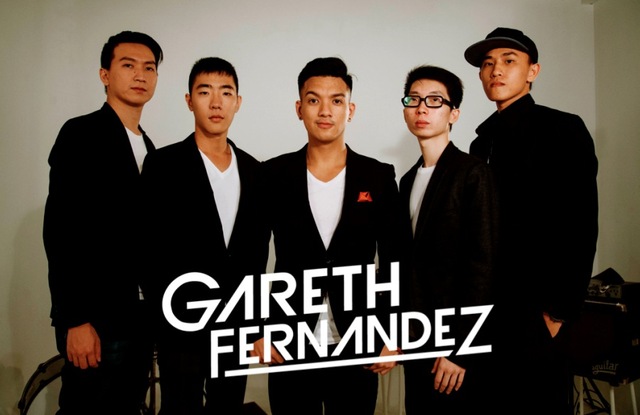 People know Gareth Fernandez but they may not know about the talented band behind him, introduce them to us.

I’m so glad you asked, because the Gareth Fernandez Band are some of the most talented, dedicated musicians I know, and they’re also a bunch of really stand-up guys!

James Lye, Guitar: James is simply a mythical creature. His résumé is almost as long as Game of Thrones and he can multitask better than a 3-headed dragon. Seriously though, he plays guitar, composes, sound engineers, produces and is an accomplished sound artist/designer! (Catch his show Touch: Identite from 25-27th July!)  James is super avant-garde and sophisticated in his music tastes, and the best part about him is that he doesn’t put on any airs. He doesn’t seem to know that he is incredibly kick-ass.

Sikai Goh, Keys/Organ: Sikai is a young dude with an old soul. Besides having impeccable taste in music and the coolest ideas for licks, hooks and arrangements, he oozes confidence both on and off stage. He helped me write all my songs from the get-go. He is our band’s co-producer, arranger, sound engineer, and is a multi-instrumentalist who is fluent in keyboards, drums, guitar, violin and trumpet. This dude just makes me jealous of his talent everyday.

Titus Ng, Bass: Titus and I go way back, and he is the sincerest most dedicated musician I know. He’s always practicing. He lives Bass. He plays double Bass. He loves Bass. He has a Bass tattoo. I can always count on him for both the music and business sides of the project. He has loads of talent and his never-give-up attitude spurs me on everyday. We have long talks on where the project is headed and how we can work on stuff together.

Anson Koh, Drums: I’m pretty sure Anson is some sort of drum prodigy. He also plays for Sezairi, neoDominatrix and Masia One, and what can I say, the man has got the chops. He got the grooves. He’s able to balance technique with talent, humility with maturity, precision with soul. It’s a delight to watch him perform. Anson is always lighthearted and positive, but when it comes to work he is an absolute professional. He will always give his 110% for every rehearsal, every recording, every show big or small, even if he just had a 10-hour day of teaching and drumming.

As you can see, I owe these guys A LOT. The Gareth Fernandez Band is a unit, and these guys make it DOPE.

You'll be performing in a place surrounded by memorabilia by all these legends at Hard Rock Cafe, who would you name as your legends and why?

Michael Jackson – way, way, way ahead of his time. You could release an MJ track now and it would be a hit. The sheer musicality, the vocals, the dance moves, everything was off the charts. I don’t think we will ever see another MJ – although copies abound.

Freddie Mercury (and Queen) – to me, Freddie the best rock frontman to ever walk this earth. There will never be a giant who struts the stage like Freddie. I just wish I was alive when he was.

You're a very stylish man - do you think image plays an important role in putting your music out there?

The truth is: I’m kinda vain. I try my best to stay healthy (huge challenge cause I love junk food), and I think feeling good, looking good and being in the entertainment industry are all very much related. Emotional, physical and mental health plays a part in your image, how you carry yourself and Who. You. Are. So yes, in today’s digital, visual age, I think it’s vital that I dress well, groom myself and (try to) keep fit for my image and branding. I want to be healthy and feel good, so if that helps my music too, awesome!

What can we expect from your show at BTMM - any surprise collaborations or material?

I’ve been doing a lot of collaborations in my work online – Sezairi,  Dru Chen, Nathan Hartono, Cilla Chan. So for Bandwagon’s The Music Market, I would like to keep it organic and solid with the core 5 members of the Gareth Fernandez Band. I’m hoping to play a new original song that we’ve been working on, and some new covers as well. It’s gonna be cool. Promise! 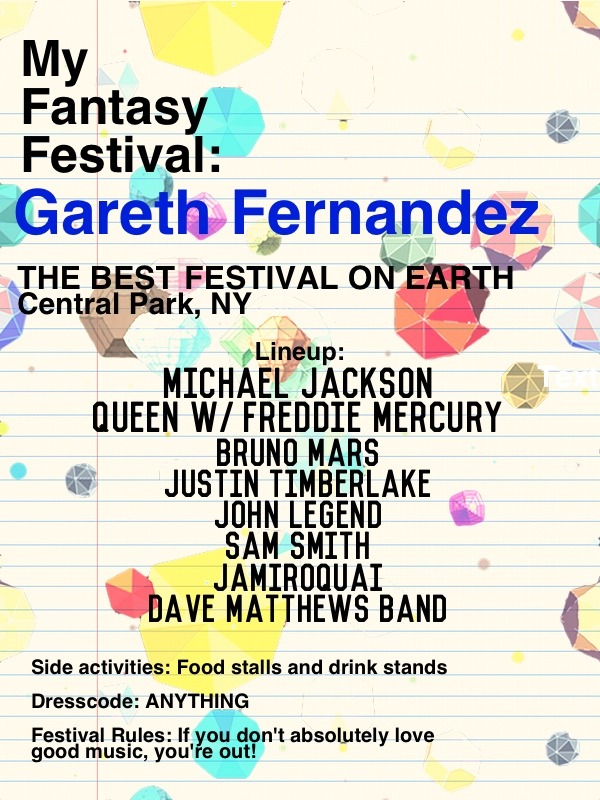 GET YOUR TICKETS TO BANDWAGON: THE MUSIC MARKET HERE! 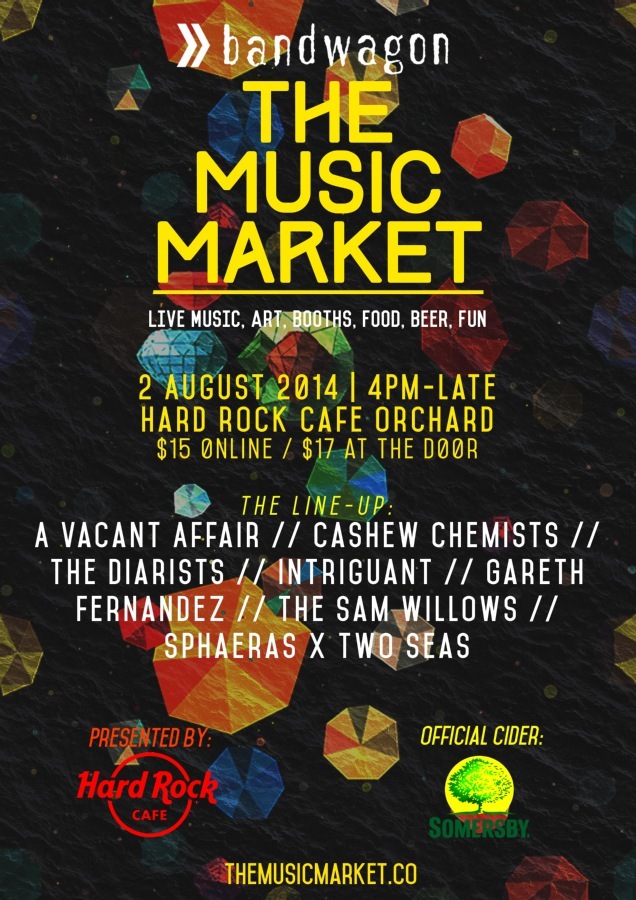