What would the modern reviewer make out of this show? Back in 2010, we were quick to assume The xx debut in 2010 with XX was the pinnacle of their success but their sophomore release Coexist placed a further dent into our soft plastic moulded hearts. After their first appearance in Singapore, playing stage warmers to Florence and The Machine, the band has moved mountains. Fast track three years, the band book late-night festival spots on the regular and get hounded by hoards of fans in dapper suits. Not exactly the kind of reaction you would envisage for the London trio.

Tonight was another impressive addition to that. Selling out a 5,000-seater theatre in Singapore, which resulted in an additional show slot. The case in point here is that the band’s recipe for success has worked out better than they expected for themselves.

Meeting the band outside a theatre in Melbourne earlier this year, I learnt that the band were shy even in front of an audience of three. How they manage to hold off all the noise and attention onstage and move with such renewed confidence is a mystery worth unraveling. In 'Sunset', Romy puffs herself up and glares into the intimidating crowd as she belts her bit while propping her arm up on her guitar. She looks dainty on the colossal stage and as awkward as it appears, she isn’t affected in the smallest manner. 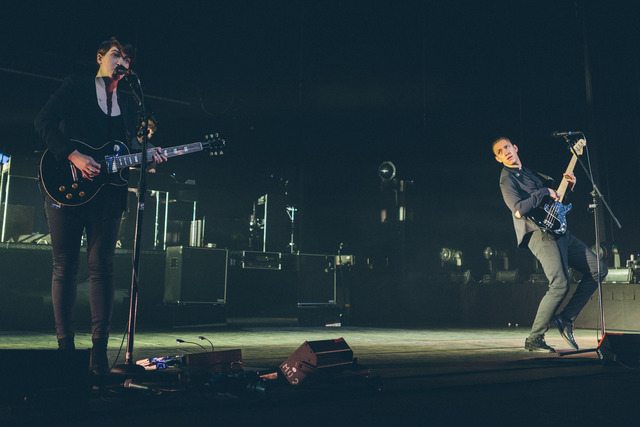 Romy’s guitar part doesn’t divert for most bits with the exception of a slow part in 'Crystalized'. But it is the vocal interplay between Romy and Oliver that lands the job. 'Missing' floats gently as a series of tonal warps encapsulates the crowd with the duo take turn filling out the gaps left by each other.

In 'Fiction', Oliver settles his bass down as he sweeps the stage mike in hand while adjusting the look on his face. Moves exaggerated, the air is filled with a different emotion as the drone in Oliver’s voice rattles. “Fiction when we are not together, mistaken for a vision, something that was my own creation”, the lyrics scream genuine heartbreak from a misguided lover but that’s not to mean they only write in adversity.

As Oliver sways in-between cascading lights, you find there are only a couple of things you’d associate them with, and simplicity was one of them. The English trio pride themselves in the whole minimalistic movement (two lines meets in the middle sh*t). Although there was no great deal of money spent on flashy visuals or outlandish outfits, whatever the band lacked in, they made up for in poise, character and brilliantly choreographed moves. Oliver despite his tall stature manoeuvres in and out with his Fender bass for a partner and dropping his shoulder each time string meets thumb. And that thing they do as they meet in the middle vibing in front and centre for everyone to see, that they are connected to each other only by their guitars and imaginary portamentos. 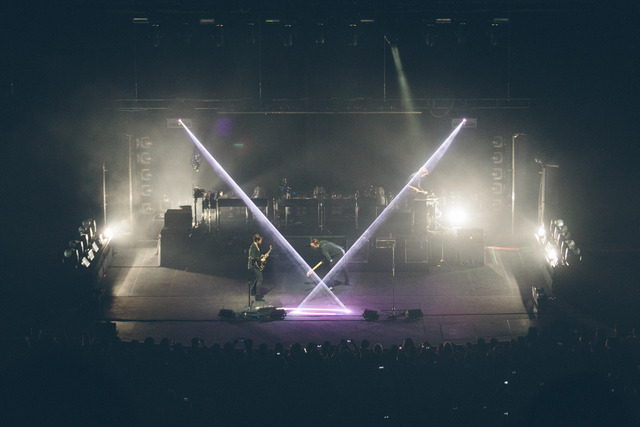 Somewhere in the lesser corner of the stage, Jamie XX bumbles with tenacity as he dismisses the notion that a band could still sound just as good without a full band. The provider of beats is a musical genius, his subtle contributions form up the backbone of the most of the song. The prelude to 'Far Nearer' did offer him a chance of redemption, as the steel drum bit dropped, the floor pulled away in eruption. It is apparent he was comfortable with playing second fiddle to the duo, but his beats weren’t.

The hums and gasps continue, two more tracks slide off the set list before pre-encore 'Intro' comes on. The stand out song has no words to hold on to, but the four-minute version saw more body parts move than the rest of the songs ever did. Closer 'Angels', resonates both dreamy and passionate as Romy in her soothing words of “being as in love with you as I am” reopen old memories in the distance. 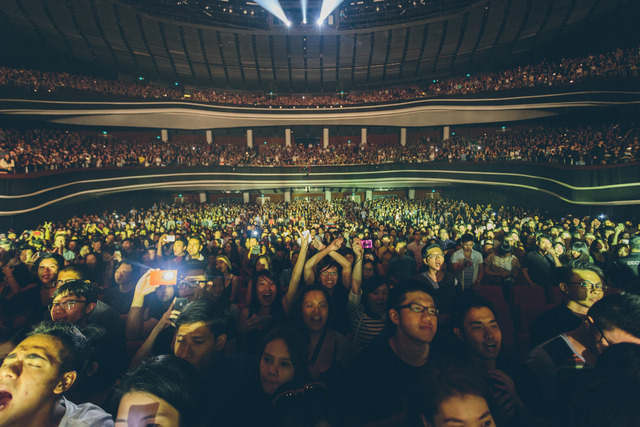 As the lasers combine to form an X, Romy and Oliver left the stage hand in hand after struggling with their heartfelt gratitude. It is only at the end of the show that you feel strangely lost, like you have gone through an entire drama series and feel a pang in your chest. Something missing but everything still intact at the same time. That’s what an xx show feels like for me.

Check out photos from our on-the-ground reporter HERE