Stretching that to three full weekends, complete with a rigorous but minimal backline and a compact crew, that would seem like a pipe dream concocted by a diehard. With 100 Bands taking place at a former bus interchange in the Northeast heartland last year, it was merely a wink at what could really happen and with 100+50, that dream is realized in ways none of us could've ever expected.

Taking place at the serene and spacious Bedok Reservoir, 100+50 was the anticipated follow-up to a concept that nobody initially thought could exist outside of the city — a multi-stage celebration of everything that the independent scene of Singapore has spawned so far.

It was only fitting that 100+50 would follow a string of successful gigs and albums that marks the most eventful year in Singaporean music in a long time, notwithstanding the calvalcade of SG50 rhetoric. Where we go from here will depend on our efforts and the people behind 100+50 took a step further to improve on their concept of immersion into Singaporean music.

100+50: WATCH HIGHLIGHTS FROM THE FINAL WEEKEND

100 Bands consisted of, yes, 100 acts on two back-to-back stages. This time, 100+50 involved another 100 acts along with 50 DJs and producers from Singapore's burgeoning electronic music scene. Showcasing a large stage to allow back-to-back sets on the same platform, 100+50 provided a separate space for the additional 50 acts at Bedok Reservoir's floating deck.

In order to make it work, the main crew behind the festival spent countless nights systemising the logistics involved, working closely with contractors and the sound engineers to ensure a smooth three weeks. At least, ideally. The first night was already marred by tech problems, resulting in a severe delay in schedule, but the crew pushed on for the remaining eight weekends, tackling each challenge with admirable dexterity and a stern refusal to give into the exhausting demands of the fluctuating weather. 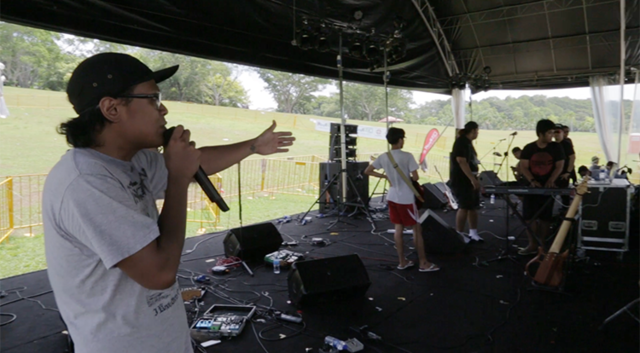 Behind the meticulous coordination backstage were Juhardi Mohamed of Dunce Collective and Lepark, and Amir Kadir of Rockstar Collective, under the watchful supervision of Razi Razak, the brains behind 100 Bands' foundation. With strong partnerships all around between dedicated individuals, coming together to promote and nurture a growing presence of Singaporean music, we took a bit of their time to show us how everything was done "backstage".

Of course, we were on the ground and we wanted to know — who were these people that flocked to the East to watch their fellow countrymen perform onstage? We called along the affable Famie Suliman, aka the frontman of The Pinholes, to ask around. The results will shock you, we think.

100+50 is a programme of +, Aljunied Cluster PAssionArts Village 2015, organised by Aljunied Cluster Community Arts and Culture Clubs together with The Rockstar Collective and supported by Ministry of Culture, Community and Youth.