Unless you’ve been living under a rock, you’ve probably heard that our queen and current pop music overlord Taylor Swift will be dropping by Singapore for her 1989 World Tour this coming November.

And if you’re anything like us, you’re also probably wondering - how does one get to hang out with Tay-Tay if one isn’t part of her celebrity-supermodel squad? It’s simple really, all you gotta do is ‘Shake It Off’!

Just last week, Cornetto launched their wacky Shake It Off Battle, with the grand prize of a once-in-a-lifetime meet and greet with Taylor Swift herself up for grabs.

Here’s how it works: fans can audition with their most entertaining Shake it Off lip sync video based on the weekly theme via Instagram or Twitter with the hashtag #CornettoShakeitOff. Ten audition contestants will be shortlisted each week to participate in the Live Battle stage - a 90 second lip sync performance of ‘Shake it Off’, complete with props and costumes!

Finalists will be judged via public voting Cornetto’s website where the top two voted contestants each week will win a pair of Category 1 concert tickets and progress to the Finale.

Week 1’s hip-hop themed auditions already took place last week and you can check out the awesome videos here. If you think you can do better, week 2’s auditions are currently underway so hustle!

The 8 finalists from the 4 Live Battles will then progress to the Grand Finale on 31st October where they’ll square off against each other for a chance to meet T-Swizzle in person and a year’s supply of Cornetto! To check out the winners, event details, contest mechanics and other information, simply head to Cornetto’s website or Facebook page.

Not to be outdone, we here at Bandwagon are also giving away Taylor Swift prizes!

The top prize is a personally signed Taylor Swift poster! To win, all you have to do is answer all these 5 Taylor Swift trivia questions correctly over here.

Not to worry though, fans who come in 2nd, 3rd, or 4th will each get a Taylor Swift Cornetto Gift Pack worth about $100 each. May the swiftest Swiftie win! 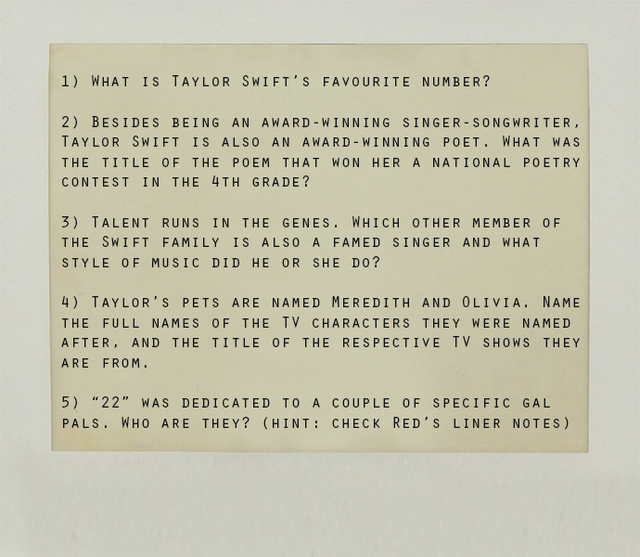