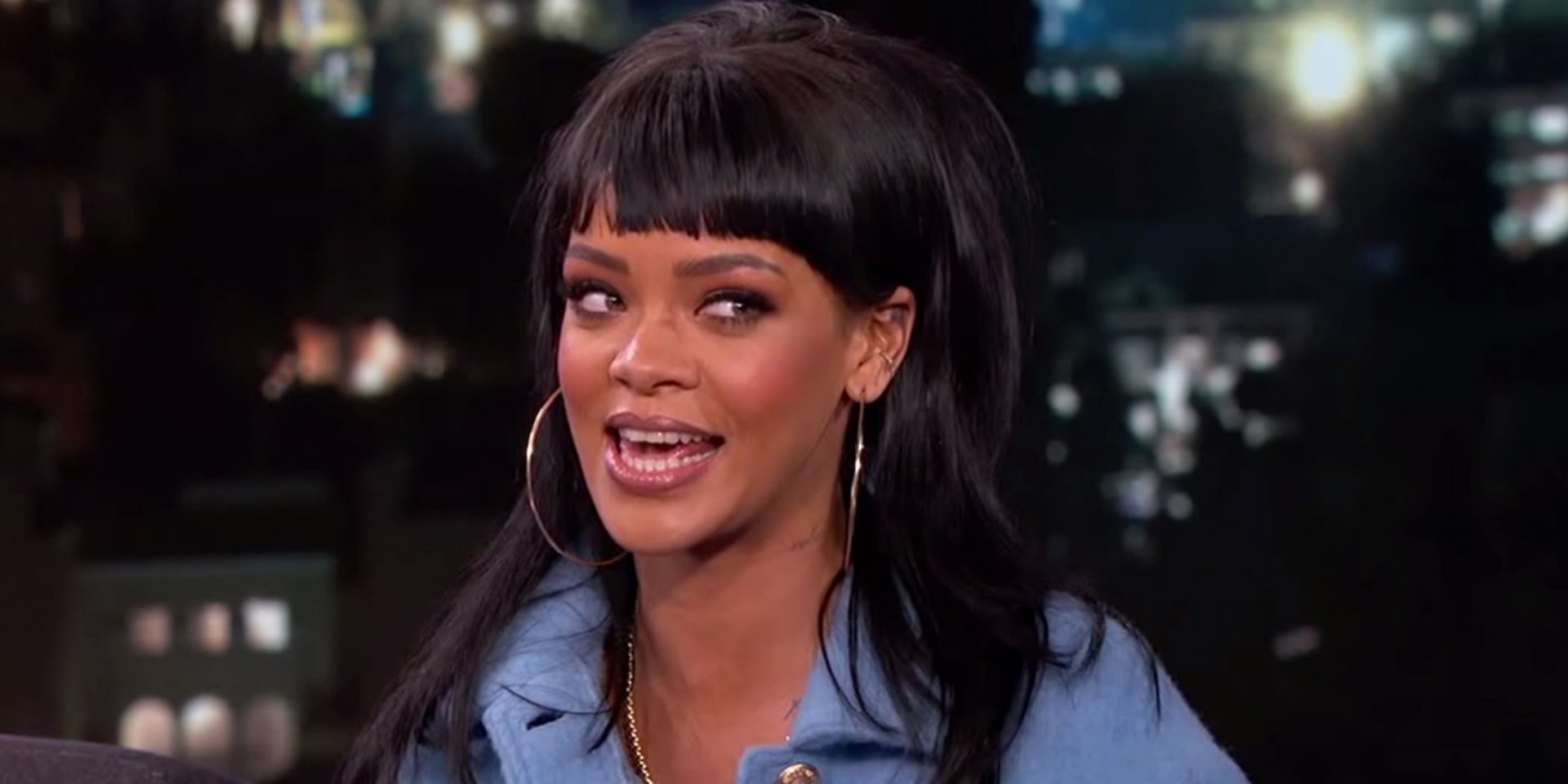 ’Tis the day for pranks and capers. The fact we have a cultures-spanning, globally celebrated day where we can plot and scheme to put someone in an unflattering position just for laughs is proof that a big part of being human thrives on schadenfreude. In celebration of this somewhat unsettling fact, here are 10 pranks by musicians with formidable laugh-power.

Amongst Rihanna’s many-splendoured charms is her left-field sense of humour. In March 2015, she released her non-album trap manifesto ‘Bitch Better Have My Money’, which she’d subsequently unleashed on a sleeping Jimmy Kimmel, right in his bedroom. In the clip, Rihanna and her backup dancers, as well as a camera crew, sneak into Kimmel’s bedroom and, with the help of his wife, play the song at a deafening volume, accompanied by strobing lights and make-it-rain cash, waking up the clearly disoriented and startled talk show host.

In the class of the greatest bands of all time, Metallica are also the greatest pranksters. During the recording of the live DVD, Cunning Stunts, which foreshadows the foolery of band, ‘Tallica flawlessly played through a barrage of songs that included ‘Sad But True’, ‘Creeping Death’ and more. However, during ‘Enter Sandman’, the stage began to fall apart, with crew members catching on fire and spotlights falling to the ground, narrowly missing band members. The fans in attendance were left wondering what had happened, many of them screaming for their lives. It wasn’t until awhile later that everyone realised Metallica had planned everything all along, when they revealed the name of the DVD. Since then, the band has reenacted the same scene during the filming of its 2013 film, Through The Never.

Two months later, the Canadian rapper sent fans into a frenzy when he announced on Twitter: “Please refer to @nickiminaj as Mrs. Aubrey Drake Graham and don't stare at her too long. She's finally mine. :)” After a day, Minaj tweeted: “My husband Drake and I have decided to have our marriage annulled. We'll maintain joint custody” and confessed it was a hoax all along.

On this day, eight years ago, Hanson revealed that it will be abandoning its usual pop-rock palette of sounds and recording an album of Slipknot covers instead. “We just felt like we needed to reinvent ourselves as a band a little bit with this kind of a project, Zac Hanson told VH1, as his brother Taylor qualified, “Slipknot is kind of an underrated band!”. What made the prank more believable was that the band of brothers actually shared a video of them covering ‘Wait and Bleed’.


Let it be known that apart from being one of the biggest DJs in the world, DJ SNAKE is also one of its biggest trolls. In March of 2015, DJ SNAKE started a three-year-long prank war with collaborator Dillon Francis, when he invited Francis on stage at Ultra Miami to perform their hit song, ‘Get Low’. During the second drop, SNAKE got his team to flash Francis’ real phone number on the Jumbotron. Before long, Francis looked behind him to see what was being showed on the screen. Francis’ phone was immediately flooded by texts and calls and was forced to change his number entirely. Francis exacted his revenge three years later, but none of that would’ve happened if it weren’t for SNAKE’s cunning prank.


Before John Mayer blew up to superstar status, he used to dress up in a bear suit and joke with his fans before his shows. In the particular video, Mayer is seen playing frisbee with fans, dancing and sharing hilarious “facts” about himself – even pronouncing his name as “My-yers”.

He even pranked singer-songwriter Sheryl Crow when he joined her on stage for their collaboration ‘My Favourite Mistake’ throughout her 2006 tour. On the final night, Mayer donned the suit and Crow was so thrown off that she forgot most of the words of the second verse of the song.

No matter how you feel about TMZ, you have to admit that not only are they usually the first to smell blood, but, that, when they do, they act immediately. Many public figures have felt the serio-comic wrath of the platform and come out looking like fools but there was one time frequent target Justin Bieber had his sweet revenge.

One day, he tweeted the following, “As promised taking all fan phone calls TODAY at (888) 847 9869. Talk to u soon!” Though the post was soon deleted, his army of Bliebers had already called the number, which belonged to TMZ’s tip line, and clowned it good.

Deadmau5 has always been a jokester, having pulled many pranks over the course of his career, including showing up to the live telecast of the Grammys with Skrillex’s phone number emblazoned on his shirt. Nothing, however, tops the trolling of his fans and Martin Garrix in one fell swoop in 2014.

This was the year of Garrix’s arrival, with his smash hit ‘Animals’ garnering over a billion plays and support from DJs worldwide. Deadmau5 was invited to perform at Ultra Miami on a day’s notice, filling in for Avicii, who had to pull out of the show. During his set, the Mau5 began playing the intro to ‘Animals’, and everyone lost their minds, until the drop came and Mau5 trolled everyone by switching it to ‘Old McDonald’. It’s weird that no one saw this coming, since Deadmau5 typically never plays mainstream EDM during his sets.

In 2015, a few months before Adele released her third studio album, 25, she, together with the BBC, concocted an elaborate prank to fool her fans. For the stunt, the singer donned a fake chin and nose, sported a fake accent and changed her name to “Jenny” to audition with the rest of the Adele impersonators.

When she chatted with the impersonators backstage, she ridiculed the five-year wait for 25, commenting that Adele was “taking her time”. At one point, she even pretended that she was so nervous she was “going to be sick”. The gag was almost instantaneously over when a few of the impersonators recognised her voice when she started singing, which led to gasps and as well as a few tears.

PLEASE RETURN THE CRYSTAL!// Our rose quartz was stolen from the Silverlake shop. This loving rock has given so much to an entire community and has much more to share. To whomever took her out the door, you do not want the energy of a stolen crystal, please trust me! Anyone who can help her find her way home will be hugged and fed, no questions, just thanks.

Joshua Tillman has been upfront about the fact that his Father John Misty guise is a pop culture-wide inside joke with an occasionally high concept thrust. There’s a sneering Nabakovian contempt for stupidity in a lot of what he does, like in this episode where one Amanda Chantal Bacon, owner of a Los Angeles juice store, posted an imploring message on Instagram, directed at the thief of her rose quartz crystal.

This was FJM’s since-deleted reply: “There's been, understandably, a not insignificant outcry regarding the alleged "theft" of the rose Quartz crystal from the Echo Park Moon Juice™, pictured above. I am here to claim responsibility, though I do not condone the rhetoric employed in Moon Juice's post. To claim that 'something has been "stolen"' is in itself a tacit endorsement of the capitalist values that blended superfoods and locally sourced produce stands, ironically, in direct opposition to ... As a practicing Buddhist I can only advise you to try and remember the crystal is only random phenomena, and if it HAPPENS to find its way into my pocket, and that pocket HAPPENS to leave your store, creating some ownership/theft/possession narrative will only cause you more pain - as you will be attempting to find significance where there is none. Also your smoothies are inconsistent to say the least but largely impossible to steal so that is an injustice that I must face, and I accept with an open heart knowing that each watery gulp is an invaluable teaching moment”.