It's pretty much the most massive lineup we've seen around here, and we've all been awaiting it from the edge of our seats.

The 100 Bands Festival is back, and this time with 50 more electronic acts adding to the SG50 pride in the best way possible. Now named 100+50, the staggering lineup of 100 primary acts is right here, ready for us to scour through, flail and go "YAAAAASS" at all our favourites – which such an extensive list is sure to include many of.

Even with the large pool of bands featured last year, the festival certainly hasn't exhausted our sea of local talents — they've managed another vastly diverse lineup this year made up of mostly different names from what we saw in the festival's previous debut, and plenty that are returning after short hiatuses.

There's experimental rock band The Observatory and soul/jazz wunderkind Charlie Lim leading the pack, along with folk rock group Hanging Up the Moon, electronic/trip-hop duo .gif, heavy metal satirists Cockpit, post-hardcore band Caracal, jazz-funk trio TAJ, electronic group Riot !n Magenta, post-prog champions ANECHOIS. Of course, we've had plenty of chances to digest their live shows this year — what's really exciting is the return of some bands that have been absent from the stage for a while now.

We're pretty stoked for these bands especially: screamo purists Paris in the Making, instrumental rock band This is Atlantis, post-hardcore group Two Seas, the reunion of rock band The Stone Revivals. There's also the understated return of Allura, aka the previous primary project of a certain singer-songwriter named Inch Chua. In a statement by the Peoples' Association, "100+50 is a product by Aljunied.Arts and THE RSC. The festival is part of Aljunied GRC Passionart's village. Also 100+50 is featured in four main programmes — Visual Arts, Theatre, Music and Community."

Revel in this sprawling lineup and look out for the additional 50 electronic acts and DJs coming your way soon.

UPDATE: Unfortunately it looks like The Steve McQueens have bowed out this round. They're replaced by newcomers Young, whose aggressive rap-rock stylings you may have caught at Baybeats this year. 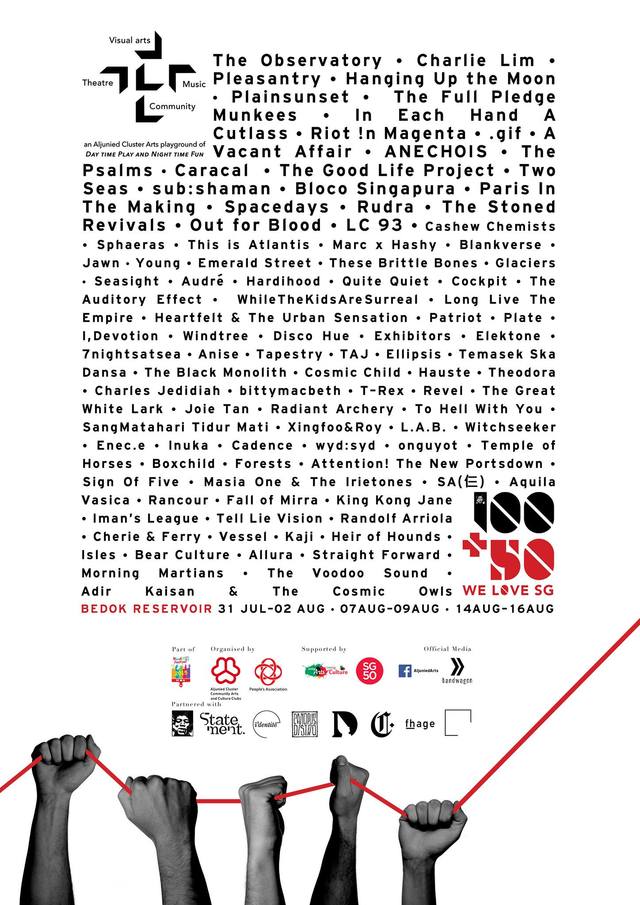