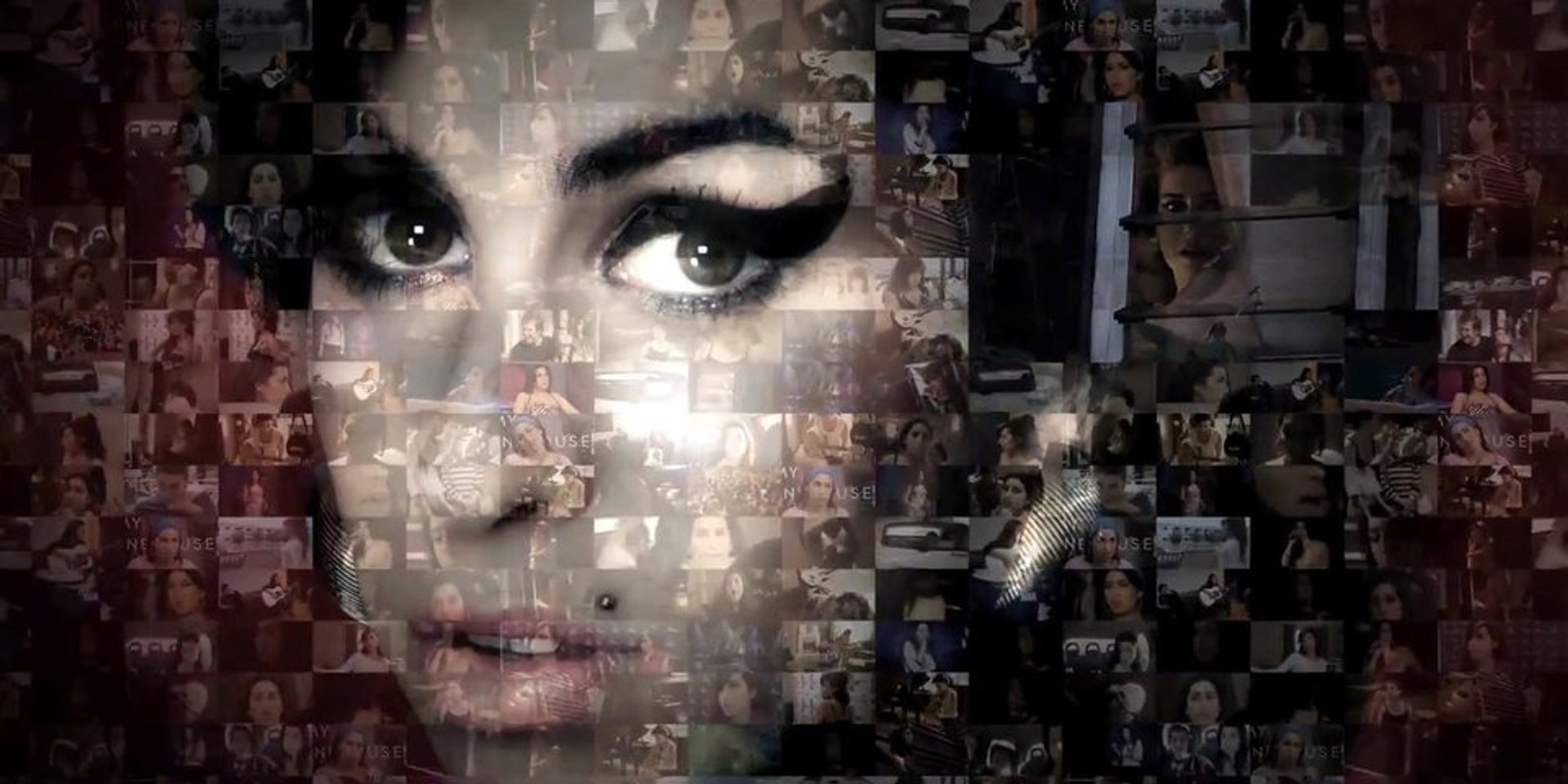 No, we don’t mean soundtracks or musicals. What we want to talk about here are films about music.

From great biopics (Control, Walk The Line, 24 Hour Party People) to engrossing documentaries (No Direction Home, Searching For Sugarman, Mistaken For Strangers) to fictional narratives (High Fidelity, This Is Spinal Tap, Almost Famous), there have been plenty of outstanding music-inspired stories on the silver screen for us to enjoy over the decades.

But for the sake of timeliness and brevity, we’re going to narrow the field down to just the movies released this year. And don’t let Zac Efron’s insipid We Are Your Friends fool you, 2015 has actually been a rich year for music-related films. Here are 10 of the very best.

Primarily made up of handheld home video footage, Amy presents us with an incredibly intimate look at the life and times of the late Amy Winehouse.

Her talent still inspires awe and her quick rise to fame can be uplifting at times, but her story is a tragic one, and this film pulls no punches in depicting the cancerous nature of celebrity and addiction. What’s striking about this warts-and-all documentary is how thoroughly researched and honest it is. Director Asif Kapadia deserves credit for providing nuance and context (showing how literal her lyrics were was a brilliant touch) to Winehouse’s legacy, and presenting it without judgment. Amy is as powerful and as it is profoundly sad.

Impressive in scope and technical to a fault, director Alexander Dunn must’ve done an inordinate amount of legwork for this.

808 documents the story of the humble Roland TR-808 drum machine, and its unprecedented influence on hip-hop, pop and pretty much every single electronic music genre in existence. Introduced in 1980, the TR-808 is still heavily in use today, which should give you an idea on how irreplaceable its sound has become. Iconic figures like Afrika Bambaataa, Rick Rubin, The Beastie Boys, Felix Da Housecat, Goldie and many more appear on-camera to drop engaging anecdotes, but perhaps the most fascinating revelation comes from Roland founder Ikutaro Kakehashi himself right at the end.

While Amy offered an unvarnished look at a controversial figure, Straight Outta Compton instead chooses to sugarcoat its subjects. This biopic whitewashes certain bits of unflattering history, while making NWA’s rappers look like noble warrior-poets.

Nevertheless, Straight Outta Compton is still an fantastic film. F. Gary Gray’s condensed take on the NWA origin story is so potent, so kinetic and so flat-out exhilarating that you’re willing to overlook its revisionism. Some details may be omitted, but the angry, rebellious spirit of the group feels accurately represented, and that’s all that matters. The final act does present a lot of unnecessary cameos (setting up phase 2 of the Hip-Hop Cinematic Universe?), but overall, this film is unbelievably entertaining.

Bill Pohlad begins with Wilson’s rise with The Beach Boys in the 1960s, showing how the voices in his head played a part in developing his genius orchestral pop albums. In contrast, Wilson’s life in the 1980s is in shambles, having become a recluse once his break with sanity overwhelmed him. The heart of this film is Elizabeth Banks’ portrayal of Melinda Ledbetter, a courageous woman who helped Wilson overcome the emotional scars left by his biological father, and urged Wilson to break free from the thrall of his new abusive father figure, Dr. Eugene Landy, a con-man whose manipulation and malpractice nearly crippled Wilson.

Although technically a 2014 film, Whiplash only made it to our cinemas in January, so we’re counting it amongst 2015’s finest.

Taking a sports movie approach to one kid’s harrowing journey through a jazz conservatory, the film is essentially a two-person play between prodigious drummer (Andrew Neiman) and his fearsome mentor (Terence Fletcher). Damien Chazelle’s film is a masterclass that hits all the right emotional notes, alternating between the extremes of panic and jubilation, all to explore how egocentricity and humiliation are both integral parts to greatness. But to nitpick, while this film uses jazz as its backdrop, it's message is so wildly contrary to jazz’s ethos that jazz purists might become annoyed watching this.

More than two decades after his passing, Kurt Cobain remains such a magnetic figure that there have been several different documentaries made about him and/or Nirvana.

However, Montage Of Heck is the only one filmed with the cooperation of his family, and its consequently the best of the bunch due Brett Morgen’s access to the entirety of Cobain's personal archives. Compiling a treasure trove of unheard demos, unreleased home video, unseen artwork and unread poetry, Morgen successfully crafts an absorbing collage of a sensitive but volatile artist. This isn’t a linear retelling of the by-now familiar Cobain story, this is an impressionistic portrait that is in many ways truer to the man than most fact-oriented documentaries.

While Crawford frames the film as a primer for newbies, its central players like Bad Brains, Minor Threat and Fugazi (among many others, including Dave Grohl, who seems to pop up in every documentary), are invited to reminisce. Salad Days’ best parts reflects the scene’s DIY spirit, detailing how the musicians ran shows, marketed themselves, distributed albums and even made their own vinyl sleeves independent of traditional label infrastructure. The film is fast-paced and fairly detailed, giving audiences an energetic guide to how a group of middle-class kids managed to organically cultivate one of the most fearless eras in music history.

Seymour Bernstein is probably the most talented living musician that you’ve never heard of, and that’s a shame.

This intellectual and insightful documentary aims to right that wrong. Bernstein is a virtuoso classical pianist who retired from his distinguished career as a concert performer to lead a quieter life as a music teacher and composer. Directed by Ethan Hawke, who describes Bernstein as a mentor, this documentary is a love letter to extraordinary life and work. Full of wisdom, passion and warmth, Hawke gets his friend to open up about the boundless patience, devotion and practice it takes to nurture one’s craft. Touching, funny and inspirational, Seymour Bernstein is the antithesis of JK Simmons’ character in Whiplash.

Much like punk, hip-hop is as much about fashion as it is about the music itself. Fresh Dressed is Sacha Jenkins’ educational and informative documentary chronicling the evolution of hip-hop fashion through decades, looking at the subcultural relationship between style, music and black identity in general.

This compelling biography of Nina Simone chronicles her path from impoverished circumstance to immortal cultural icon.

Her towering stature as one of America’s greatest and most versatile singers (she performed jazz, classical, gospel, R&B, folk and blues) is undeniable and her music alone provides enough mesmerizing material. But coupled with her limitless talent was a fiery revolutionist streak that almost destroyed her career. Director Liz Garbus paints a complex portrait of a weary soul dealing with the pressures of heavy personal issues, professional excellence and activism in various civil rights causes. Simone gave up popularity to champion racial and gender equality, and it's that intersection between natural gifts and personal sacrifice that provides this documentary its meat.

And just to balance out the equation, we've also included a mini list of dishonourable mentions.

JEM AND THE HOLOGRAMS

Silly, nonsensical, and worst of all, boring. This live-action adaptation sucked out all of the cartoon's sci-fi charm to make room for bland by-the-numbers drama.

WE ARE YOUR FRIENDS

A coming of age story that makes you wish its protagonist was never born. Set in the world of trashy EDM, this movie somehow manages to be even shallower than its subject matter.

The Reflektor Tapes is a directionless documentary about how pretentious Arcade Fire were while making Reflektor. Running at 75 minutes, this bloated film is 75 minutes is too long.