The lights dim. She walks onto a bare stage and an eager crowd, filling up the seats of the Esplanade Concert Hall, bursts into a fervent applause. Her eyes grow warm and she blows kisses in response to the animated crowd, paving her path towards the piano.

Rachael Yamagata plays the first chord of “Even So” before launching softly into her distinct tone — a pleasing husky element that holds us emotionally captive, her hypnotic vocals delved into an ardent vulnerability and honesty accompanied by her feminine strength. She had a raw quality we can’t help but admire. Rachael Yamagata’s concert on May 30, officially marking her sixth time here, still left the audience whistling and cheering for an anticipated encore.

The Virginia-born performer not only left us yearning for more of her captivating voice but also for her engaging, witty humour that's easily gleaned from her personality. Her versatility, in terms of her music and vocal prowess, continuously earn her enthusiastic responses. Singapore is no exception. 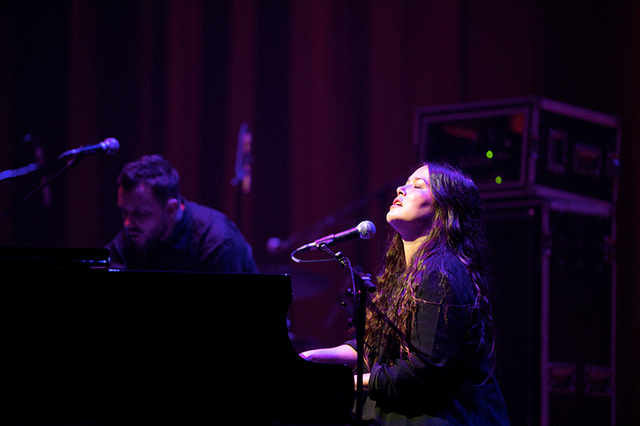 Yamagata truly possesses the skill to artistically construct a song from simple elements, and that’s all one really needs to be successful in the music industry, especially for those who aspire to be singer-songwriters. The role of the female singer-songwriter has become a mainstay in the conversation of modern music.

Where they once started off at the bottom, they’ve tirelessly worked their way up amongst the most elite of musicians. In the context for a lot of pop music, songwriters would work for publishers — writing songs for particular artists, configuring the singer's voice or even shop it around for potential artists. Singer-songwriters, on the other hand, endeavour to form their own identity through their craft of making music on their own.

However, it was in the 1960s when the hierarchy of the music industry in regards to singer-songwriters started to blur, as a result of direct influence from the Beatles and Bob Dylan. These artists, in the eye of popular culture, pushed the boundaries of what music could sound like — how it didn’t have to consist of a pre-determined formula and instead permitted individualistic freedom, emotion and expression. This encouraged many others to strive for authenticity and individual expression in their music.

In the 70s, artists like Joni Mitchell and Patti Smith, in particular, were often driven by their political and social climate to produce some of the most heartrending and deeply personal compositions put to tape. Singer-songwriters in the 70s were more guitar-driven, focusing a lot more on the experimentation of their music — Patti Smith found solace in the extremities of volume while Joni indulged a fascination with the complexities of jazz. The guitar was a powerful tool, as Patti Smith would proclaim: "This guitar is the weapon of my generation, and this weapon is fucking friendly fire!" 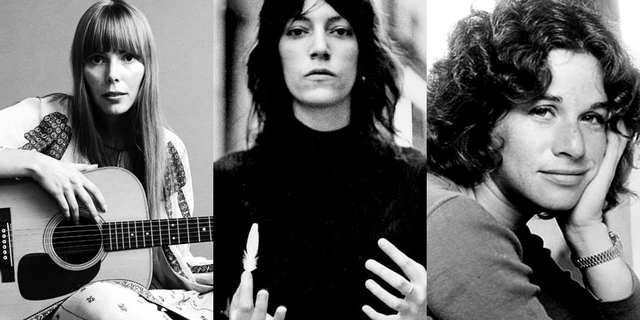 (from L-R) Joni Mitchell, Patti Smith and Carole King, three of the most acclaimed and best-selling singer-songwriters of their generation.

Today, on the other hand, with the vast access of technology, there are modern singer-songwriters like Feist, Lykke Li and even FKA Twigs — adept to the recording studio, possessing production skills along with genre-bending songwriting that’s far removed from the singer-songwriters who topped charts only a few decades ago.

Whilst they both venture into certain esoteric areas to fulfil the common aim of piecing together a worthwhile song, especially with the experimental predilections of Bjork or the careful evolution of PJ Harvey, the generation gap has taught these modern artists to put their acquired skills to use in distinct ways. With an increasing favour towards modern technology, singer-songwriters of today are almost, in a sense, obligated to utilise these advancements to enhance their music, although there are many who are sticking to their primary weapons like Courtney Barnett and Sharon van Etten. 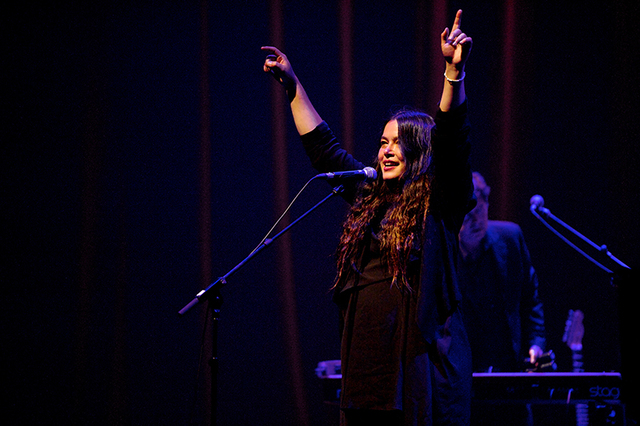 Rachael Yamagata appears to be a tender blend of both. Although she undoubtedly belongs to the modern world of singer-songwriters on the timeline of things, her music doesn’t seem to be as technologically advanced as some other artists of today. She maintains her own style — fused with a touch of modern influences, sustaining a healthy dose of experimentation, it appends to her versatility and the simplicity of her music. Her focus lies in exuding a purely emotional appeal to her songs, relying on striking melancholic melodies and lyrics free from arty metaphors.

I think this is why Yamagata seems to have found her niche both within a wide demographic of listeners. Even though the evolution of her own music took a darker turn in Elephants…Teeth Sinking Into Heart, her natural persona augments her musical simplicity, especially when she sung “Elephants” a capella on Friday night — less of an artistic choice and more of Yamagata awkwardly admitting that she forgot how to perform the song on the piano. Her honesty paired with her wit drives her appeal — at least here in Singapore, reminding us of the significant role singer-songwriters have, and still do, in our society.