Smooth, cerebral and a downright joy to watch and listen to, Grammy-award winning jazz fusion outfit Snarky Puppy are dropping by our shores this October for a night of lush tunes that synthesises the absolute best of jazz, funk, prog rock, instrumental rock and everything in between. Kick out all pre-conceptions of jazz music's uppity-ness and inaccessibility, and don't expect any suits/tuxedoes/waistcoats onstage. Less of a band and more like a collective (or rather dubbed as ‘The Fam’), the New York-based outfit boasts nearly 25 to 40 accomplished musicians (including guest artists) fluctuating in and out the roster depending on their touring schedules, playing an estimated number of over 180 shows per year. The flexibility of Snarky Puppy’s lineup allows a sense of distinction in every show; catching them live in Chicago is a different - but no less entertaining - animal from watching them tear up the stage in Indonesia for instance.

The mission to keep things fresh every time makes the Snarky Puppy experience impossible to be a dull affair, and thanks to the good folks at Fest Events International, we’re all warmly invited to an intimate session with a welcoming, talented group of real musicians getting together to play real music. If their numerous sessions on YouTube (check out our playlist below!) is any indicator of how they are live, then we’re all in for a rollicking good time at the Kallang Theatre come 23rd October. Tickets are on sale now on Sistic.

If this sounds like something you’re down wit’, drop by Blu Jaz on August 14th for a little primer in Tell Your Friends! Featuring an 11-piece band consisting some of Singapore’s best instrumentalists paying tribute to their heroes in a night of exploration and renditions of Snarky Puppy’s oeuvres that should really get you psyched up for the actual spectacle at Kallang Theatre. 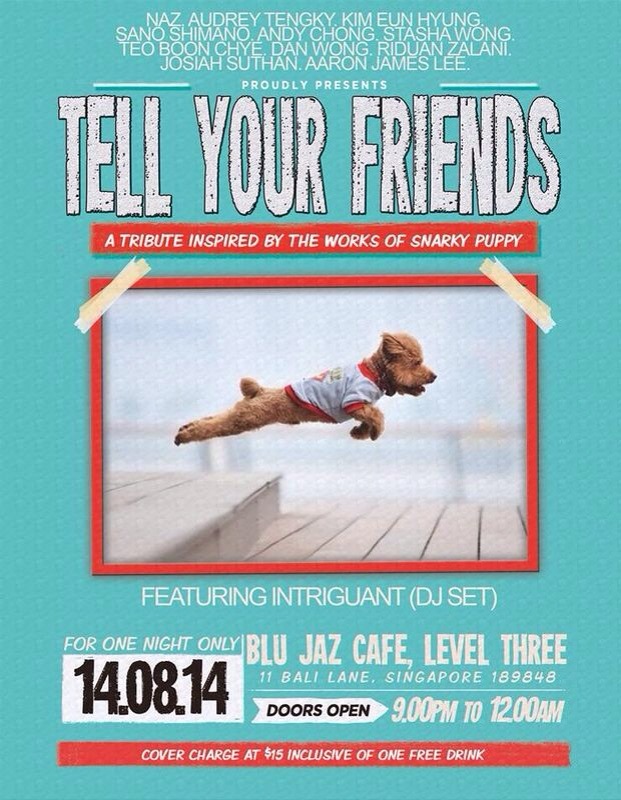