Here's the scene: local music guru and producer Leonard Soosay and drummer Daniaal Adam are methodically testing the toms, cymbals and bass drum. Singer Samantha Teng and guitarist Ahmad Ariff check their phones while they wait. Bassist Isa Ong and guitarist Haziq Hussain carefully tweak their instruments as ex-guitarist Adel Rashid earnestly watches from the floor, occasionally jumping onstage to help. A ukulele sits atop an amp in the corner, with a laptop on the ground beside Ariff.

This is a totally normal scene for any Singaporean band — except for the fact that we're in Subterranean; a little venue in Chicago, Illinois, where the weather is hovering between 9 and 13 degrees Celsius.

It's May 12 and Pleasantry are preparing for their first show in the Windy City, their third gig in North America. It's the band's first tour together, and for these five Singaporean musicians, it's ambitious — there's nothing quite like jumping across oceans and time zones for your very first international outing. So it's no surprise that the band is tired. The weariness dominates our conversation about the tour itself when Isa and Samantha, who are both new to touring, speak of how much they underestimated the amount of travelling that had to be done.

"On the map, [your destination] looks really near, but when you actually travel, 30 minutes is a really long drive," says Samantha. "With the equipment and everything, you really need a lot of stamina for touring and a really good mindset. If not, it will just tire you out completely." 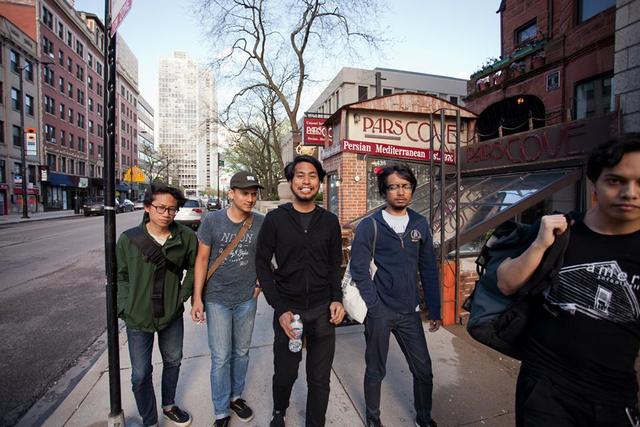 Pleasantry are getting a taste of touring in a country you simply can't cross within 45 minutes. They tell me it's a process of loading in, loading out, checking in gear, praying that American Airlines/ United/Delta/insert-any-airline-here doesn't lose or break your guitar, playing a show, squeezing in some sightseeing in between, trying some local food, sleeping at an airport for the night.

Sleeping at an airport? Oh, you bet they did.

Pleasantry spent the night before in New York's John F. Kennedy Airport, a night documented by Leonard in an Instagram post depicting the band in various states of repose, surrounded by bags and gear. In a practical move to save time on travelling, Samantha explains, the band drove to the airport straight after their gig instead of decamping to their initial accommodation in Jersey City. On Instagram, Leonard declares Pleasantry's North American tour "seriously the most exhausting tour I've been on."

It's also exhausting because Pleasantry is trying to make the most of it. They were invited to play at Canadian Music Week and they couldn't simply stop there, says Isa. "We thought that wouldn't be worth it because you travel so far and spend so much just for one show. So we decided to try our best to expand it and play as many places as we can."

So in a single hectic month, ex-guitarist and adjunct member Adel (who's currently studying in Chicago) booked Pleasantry shows strategically across the United States, hitting the east coast (New York), the west (San Francisco) and the midwest (Chicago). Back in Singapore, the band spent two months in the studio honing and tightening their set, capping off their practice with a fundraising show at The Projector that still boasts one of the best local lineups of the year. 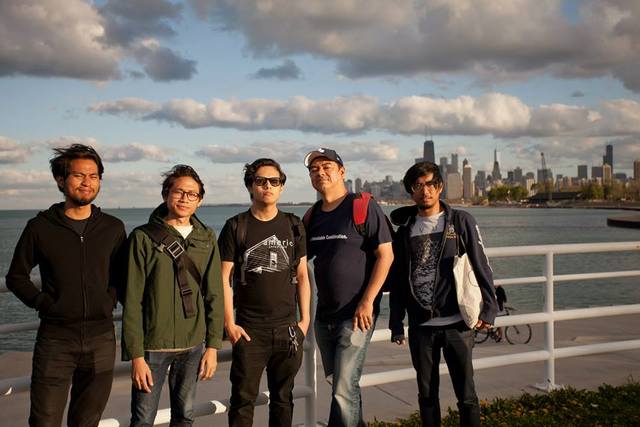 Now here they are, with two North American shows under their belt. We sit a floor above the stage, our conversation pausing whenever The Evening Attraction, the second band on the bill, got particularly noisy during their soundcheck.

Our conversation really gets going when I ask the band their thoughts on Singapore's music scene as we sit in a city 15,000km away from home. It becomes clear that Pleasantry aren't just going on tour to accrue gigging experience or to visit new places – they see themselves as carrying out "cultural exchange," showing people another side of Singapore, says Adel.

"Right now, to be very honest, all you see about Singapore [in international media] in the past few months is Lee Kuan Yew's death or Amos Yee," says Adel. "That's very sad. No offence to the whole SG50 thing, but that's really selective media coverage of Singapore. I find that really sad. There are so many good things about Singapore that people don't know about. The music scene is one example."

That isn't to say Singapore bands haven't been out there flying the flag, however. Pleasantry knows this: after all, they did play Canadian Music Week with Deon Toh and The Pinholes, and they're currently in London with Charlie Lim, Gentle Bones, .gif and music collective Syndicate for the Singapore: Inside Out showcase. Take Two and SA also dusted off their passports in April for the Beijing edition of the same showcase. 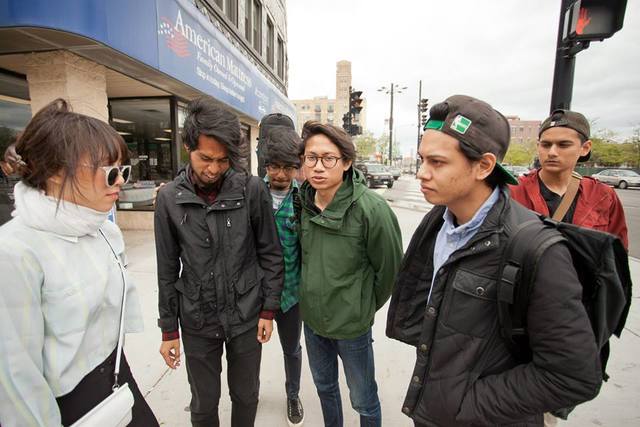 Many Singaporean bands have managed to participate in these showcases with the help of government grants or backing — Pleasantry toured North America with the help of a National Arts Council grant, while the Singapore: Inside Out showcase is a collaboration between the Singapore Tourism Board and SGMUSO.

But what about bands that play music that's less palatable to government tastes?

"Genres play a really important part of how grants are given for obvious reasons. You need things that are mainstream, listenable, and go to a bigger audience," says Isa. "So bands that I know of who have played many shows in Singapore — pretty good shows — they weren't allowed grants because of the kind of music that they play."

Adel is more blunt: "That's censoring the identity of Singapore as a whole. You're trying to let the world know that we are this kind of country with this kind of bands."

Heavier bands like Wormrot and The Caulfield Cult have managed to make forays abroad, sometimes with government assistance, but mostly through relentless, bare-bones touring. These are some examples of bands "that do everything on their own but nobody notices them," says Adel. "To them it's fine but other bands need to see that because they need to know things are possible, you know?"

The Caulfield Cult made an appearance on Audiotree Live, a Chicago-based online video series focusing on their homegrown and international acts. This was done during their North American tour.

This ties into our larger discussion of the independent scene's relationship to the government, which Isa pronounces as "tricky", adding "A lot of the independent spaces don't believe in going out for the state." Isa maintains, "That's another issue, because people want to retain that indie status and to be indie you need to be self-funded."

He also states that grants are the main ways in which the government would support Singapore's local scene. But when it comes to building the scene's infrastructure, the government's ideas are largely uninspired and disappointing, when the big issue facing independent bands now is a lack of mid-sized music venues.

"The first thing that sparked [this problem] was the closure of Home Club," says Isa. "As small as it is, as bad as the sound is" – he says this with affection – "it still stood as a very important space and place for music." With its weekly shows, Home Club played a huge role as a "stepping stone" for bands looking to hone their live skills and cut their teeth before jumping to larger platforms such as festivals. 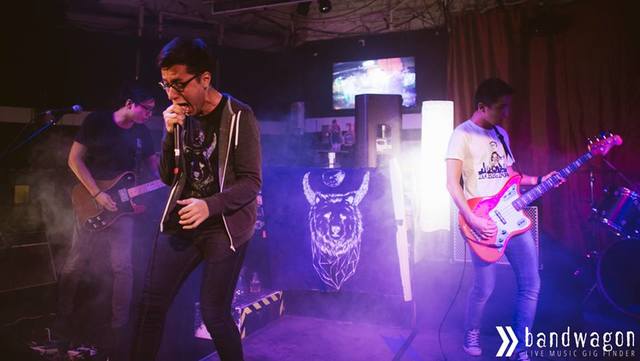 Isa credits much of the music scene's development and collaboration to small, regular shows like these: "Those [shows], to be honest, built a lot of bands. From there, other people from the independent industry came down, visual artists came down, said 'Oh, let's collab, let's do a video.' Stuff like that happened."

Other valuable spaces like Lithe Paralogue, Pink Noize and BluJaz Cafe have tried to fill the gap, and organizers have gotten creative — coaxing bands onto rooftops and into cinemas and cafes. But the band agrees that there's nothing quite like a space just for music, where the amps are already onstage and the acoustics are great. "For any independent community, the network is super important," says Isa. "Physical space really ties everyone together. Home Club was a perfect example of that."

It doesn't escape me that we're having this discussion in Subterranean, a small venue which, along with many other spaces, plays this exact same role in Chicago, a city home to huge festivals like Lollapalooza and Riot Fest but also tiny DIY shows organized by friends for friends. In such a thriving scene, the Pleasantry/The Evening Attraction/Not For You triple bill is no doubt one of many shows going on that night. But the band is still incredibly happy to be here. "What's up, Chicago? Wow, I can't believe I'm saying this," Isa exclaims to the small crowd that gathered. 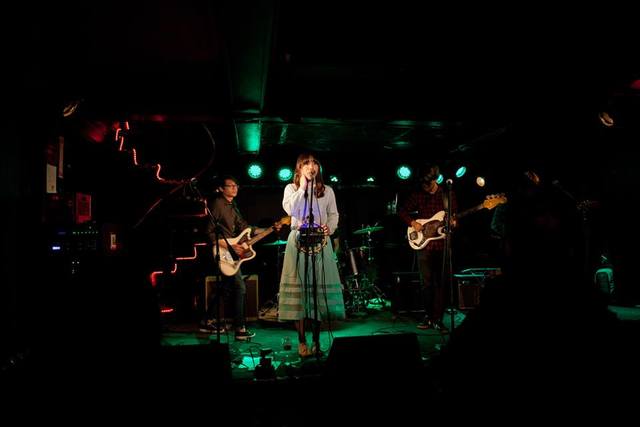 The band plays for an hour, pulling songs mostly from their album Synapses and occasionally from their first EP Porcelain Lenses. They're on top form: Samantha's voice rings out clear and melodious as Isa and Haziq amble and swing around the stage, creating a light and dreamy backdrop for lyrics that speak of love, memory and more. Adel gets onstage for one song, reprising his old role as guitarist. A particular standout is "Coasts," a new song off a split EP with friends and fellow indie pop musicians Starry Eyed Cadet, whom Pleasantry will play with in San Francisco.

But it is really the closer "Swan Song" that is Pleasantry's triumph, with its gentle buildup and multi-voiced refrain: "I'll never know what you don't know / We'll never know what they don't know." By the end, the audience is clapping and cheering, won over by probably the first Singaporean band they've seen live. Let's hope it won't be the last.