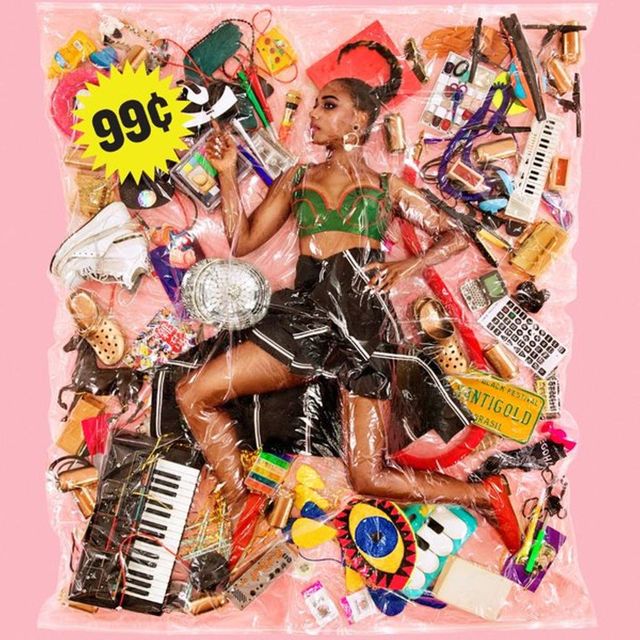 It’s been eight years since Santi White a.k.a. Santigold released her debut album Santogold. In this span of time, Santigold has tackled acting, produced a makeup collection and starred on a movie soundtrack. She is evidently on her way to become something of a pop mogul. With her latest release, 99¢, Santigold puts her money where her mouth is. With its shiny, plastic-wrapped album cover, 99¢ undeniably serves as some form of commentary on consumerist culture.

More strikingly, 99¢ sounds like nothing else at the moment – a major advantage for the alternative musician.

99¢ has Santigold gleefully immersing herself into an assorted blend of musical styles. Opening with the saccharine sweet ‘Can’t Get Enough of Myself’, 99¢ unleashes a burst of bubblegum pop that carefully satirizes the vanity and narcissism of modern culture. The cloying refrain of "come on, come on" backing ‘Banshee’ is similarly an enjoyable, dance-y tune with surface-level social commentary. “There’s nothing about it okay, come on” Santigold sings in the song, alluding to the societal pressures she faces.

Her mix of spirited melodies and biting lyrics is certainly appealing, but it isn’t exactly new, and artists like Lily Allen and M.I.A. have done it better by pushing the boundaries with far more jarring lyrics. As the album progresses, Santigold continues to further dabble with differing genres – it is indubitably fun, but her efforts also unfortunately dilute the album’s supposed message.

New-wave inspired ‘Rendezvous Girl’, for instance, is a throwback to the 80s power-suit, career-driven women. In contrast, 99¢’s slower numbers like ‘All I Got’ and ‘Walking in a Circle’ are teasingly lethargic, but regrettably forgettable. There’s also ‘Chasing Shadows’, produced by now ex-Vampire Weekend member Rostam Batmanglij — the song dazzles with its twinkling keys and tropical reggae vibes.

But the album’s highlight is ‘Who Be Lovin Me’, which features the lazy, lush feel of iLoveMannoken and Santigold mimicking his trance-like lullaby. Individually, a handful of tracks in 99¢ are pretty decent pop songs, but together in an album, they serve little to complement each other.

Again, 99¢ sounds like nothing else at the moment – which is also a major disadvantage for Santigold.

99¢ does not fit into 2016’s neatly packaged Spotify-friendly music genres but Santigold still is a pop star. She positions herself as an outlier in 99¢, despite actively participating in the very commodification of the music she criticizes. After all, 99¢ can be found on iTunes (though, ironically for $7.99)! Her deliberate stance conflicts with the album’s self-aware take on today’s zeitgeist. This apparent clash makes 99¢ feel out of place, out of touch, and occasionally, with its backdated influences, outdated.

99¢’s contrasting musical styles is enticing. However, Santigold is unable to provide a neat balance amongst her myriad of influences. Instead, 99¢’s differing genres have the tendency to blur into one another, showcasing Santigold as fickle or indecisive when navigating pop’s sonic landscape. 99¢’s restless flirtation with pop music pleads for the listener’s consideration, instead of boldly arresting your attention.

While 99¢ lacks a cohesive message, Santigold’s efforts in pop experimentation are greatly admirable. When she finds a proper footing, she truly shines — past hit songs 'L.E.S. Artistes' and 'Disparate Youth' are a testament to her excellent songwriting skills. Compared to today’s uniformed, EDM-backed Top 40 tracks, Santigold unashamedly lies on the fringes of pop. She is anything but boring, and 99¢ can be, in fact, well worth your money.