A little less than a year ago, the now defunct Home Club was all abuzz and jam-packed to the door in a highly anticipated show called "Sayonara Superboy". It marked the start of an indefinite hiatus for local instrumental rock favourites Amateur Takes Control, a bittersweet adieu due to frontman Adel Rashid's academic commitments overseas and a highly emotional testimonial and tribute to seven electrifying years of existence.

Relive that night and your yesteryears watching them live with the launch of their 12" compilation titled We Are All Amateur Takes Control - titled after that peculiar declaration from Adel Rashid at the end of their last set. Featuring classics from their self-titled EP, their full length release You, Me And The Things Unsaid and two new tracks "Radon" and "Phosphorus", the compilation will be released under local vinyl imprint Hail Satan Records.

"Hail Satan Records, which is run by our friends Zahir of I Am David Sparkle and Razalee, came to us wanting to put our music on wax. We immediately said yes to the idea, being fans of vinyl ourselves", Adel says of this project.

The decision to have their recordings pressed on wax is a highly welcomed one, firmly aligning themselves with the recent vinyl renaissance. Fans can now experience Amateur Takes Control's distinctly emotive and intelligently crafted math-infused post-rock tunes fully fleshed out on the warm tones and high-resolution audio of vinyl - not to mention that it's a great memorabilia of one of Singapore's most respected music outfits.

The LP will be released on 15 August in two colour variants (stunning white and vibrant blue marble) and is limited to only 200 copies. Pre-order yours tomorrow on 26 July through the Hail Satan Records website which will be up and running by then. 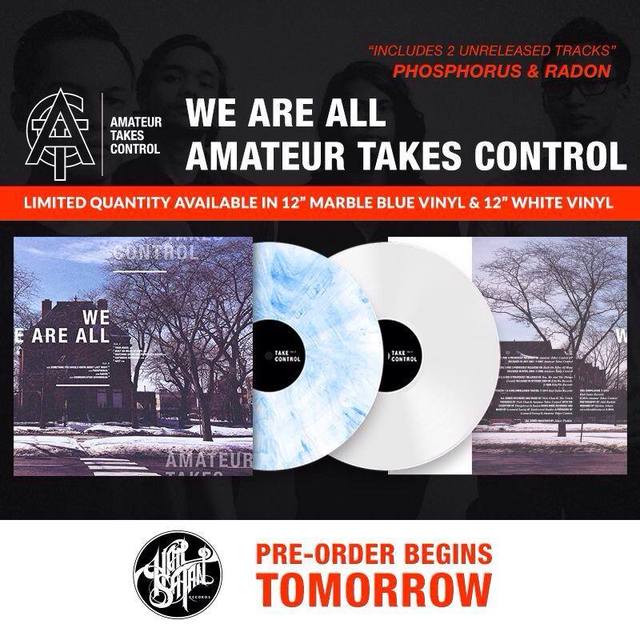