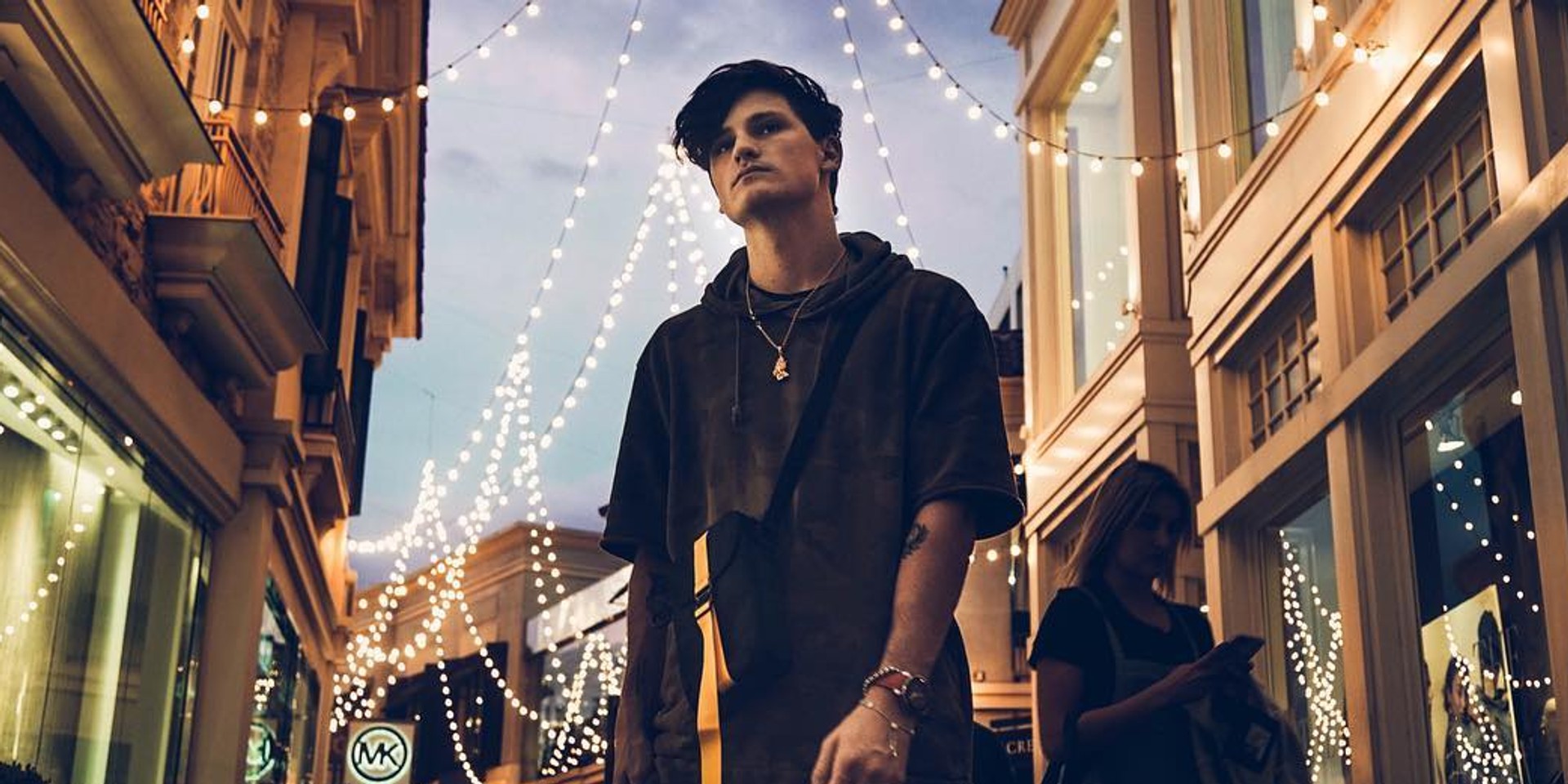 At just 22 years old, Cade has travelled the world to share his music with adoring fans.

In the extremely saturated market that is EDM, Cade stands out for his honest, and innovative, tunes. With over 4 million monthly listeners on Spotify, Cade's star is only going to shine brighter as his music reaches more fans. Last week, Cade released his latest single, 'Home To You' featuring rapper Desiigner. The track will feature on the young producer/DJ's upcoming concept EP, Wolf Blue.

Bandwagon sat down with Cade to talk about his latest appearance at We The Fest, his upcoming EP, how Asian crowds stand out, and more. Check out the complete interview below.

You performed in Jakarta this past weekend at We The Fest. How was that experience for you?

Man, that was amazing. It was really fun because we actually played in Jakarta last year, for SHVR, so to come back this year and have the people that were ready to see us again this year show up for We The Fest, and getting to meet some of the fans, it was an amazing experience.

The week prior, you performed at Ultra Europe. From your vantage point, how does the crowd in Asia differ from other parts of the world?

It's interesting because I think European crowds are more comfortable with your typical house music vibe, so people like to just lounge and vibe to the music. In Jakarta, the crowd was a little more amped, almost as if they were waiting for an outlet to let all their energy out. It was cool to see people in Jakarta, on the other half of the world from where I'm from, go really hard. They were really invested in the moment that was taking place during that hour, and it was such a special thing to see.

You put out a new single last week, ‘Home To You’ with Desiigner. How did that collaboration come about?

It's kind of a crazy story. So, I was in the studio in L.A., working at the Ultra Music studio with Gazzo on a track. We were catching a cool vibe and I wrote a top line, which ended up being the hook, so we recorded it, and it sounded really good. It didn't have the bridge verse done yet, though and we didn't know what to do for a bit. Gazzo had worked with Steve Aoki and Desiigner in the past, and he was like "Man, it'd be crazy if we could get Desiigner on this record!" and I've always been a big fan of what Desiigner does, so I was all for it.

Long story short, I didn't even know Gazzo knew Desiigner, but he calls him up on FaceTime and he introduces us, and he begins playing the song. You could see Desiigner vibing out to the song and you could see the excitement in his eyes. He was like "Yo, send me the address, I'll come over and lay a verse on it right now." I'm lowkey freaking out, and he walks in like an hour later and we stayed up all night working on the song together till four in the morning. That song was completed from start to finish within one day; it all came together so nicely.

What was it like getting to work with Desiigner in the studio, and getting into his headspace?

It was honestly really inspiring. He has this undeniable star power. When he walked into the room, the energy changed immediately, things became a lot more energetic and you could feel all this creativity just oozing out of him. It was very impressive to me, getting to see how he does what he does in the studio.

He'd get into the vocal booth and feel it out, he was on the fly with it, and didn't really write anything down. It all just came to him. He was also really quick with it, and it showed me that writing and recording music can be a little better when its done freeform sometimes, instead of always being calculated.

And not to mention, he's a wonderful guy. Very nice and down to earth. You'd think someone at his level of success wouldn't treat people the way he does, and that's one of my favourite things about him. He's so humble and kind to the people around him.

You’re working on a new EP, Wolf Blue, which is inspired by the woods and the wolf being your spirit animal. What can you tell us about how all of that imagery ties in sonically with the music?

To me, it was more than anything, a theme that felt close to home. It feels like the music not really distracted by the theme of the woods and nature, but more so just them feeling like they're a part of me.

The music feels like a true representation of what i'm making, regardless of what everyone else's influences are. I don't let the concept distract the music from being what it should be. It's just my way of demonstrating the visuals that I feel go with the music.

What else can you tell us about the EP? Is there a release date that you can announce? Are there more features?

I have another single coming out on 2 August called 'Yours'. That was a song that was done 100% on my own, which was really important to me because I've been working with so many artists and collaborating lately and that's amazing, but I wanted something that felt real and authentic and true to me.

I'm really excited for it to come out, I think people are going to respond to it really well. Aside from that, the EP will include seven songs, all of which feel very close to my heart. The EP's going to be out sometime in October, but we haven't finalised a release date just yet.

This isn't for the EP, but I'm working on a collaboration with DVBBS. I love those guys, they have this really fun energy and they're super nice. I've been a fan of their music for a long time as well, so I'm really excited to be able to work with them, and I can't wait for the world to hear that.

Writing for an EP, or album, is a lot different from writing a single, because you want the entire project to have an overarching theme. What was the writing and recording process for this project like?

It was a lot of time dedicated to creating what I feel is the best, and most true art to myself. The biggest difference is that I wanted all of the songs to have a cohesive theme and feel, but I never closed off a great song from being involved in the project. At the end of all the music being written, I wanted to give it the vibe that makes it feel consecutive and that it all falls under the same umbrella. The biggest thing, is. at the end, making it all work as one cohesive piece.

In the current music climate, where singles dominate, especially in the electronic-leaning genres, was there any resistance from the label or your team about putting out an EP? If so, how did you convince them?

Oh, definitely. Originally, the plan was to put out a full length album, 12 to 14 songs. Initially I got a little bit of backlash in the form of "Hey, that's a lot of songs to be consumed at once," and I understand that, but I've also been sitting on a bank of great music, and releasing all f them as singles just wouldn't be feasible.

I think, once I was able to show the label that the seven songs could be consumed as one cohesive piece, and that the theme unified everything, they understood. I feel like with Wolf Blue, you have to listen to one song to understand the other; it all lines up to tell a story. The concept that I had for the EP played a huge role in getting it approved. They were a little hesitant on the idea of a concept EP, but it was really cool that I was able to change their minds and convince them.

If you take a look at Spotify, Indonesia, the Philippines and Singapore rank among your top three countries. With that in mind, can we expect an Asian tour anytime soon?

Absolutely. We The Fest was something we did to cultivate a following in Jakarta because that's going to be a major stop in an Asian tour. I can't say anything just yet, but we're working on it, and it's coming soon. I'm really excited to come back to Asia and perform for even more fans across the region and meet new people.

A lot of crazy things, actually. There are going to be a few one-off shows, and a few festivals, some of which haven't been announced yet so I can't name anything, but there's going to be a whole new visual experience with my show for Wolf Blue, it's going to make the whole live show so good. I also have new merch dropping soon, so keep an eye out for that.