ANECHOIS are setting up as usual for a gig. It’s like most of their shows, checking the volume and fiddling with settings, curious gig-goers looking on at the edge of the stage, small talk between people in the crowd, people ogling at the merch table. It was like any other gig night in Singapore, but with cheaper beer. Preferably Red Horse or San Mig Pale, generally 60 pesos everywhere - that's SGD 2.50 (come on Singapore!). And also, it was their very first show abroad in Manila.

It was a whirlwind five days for the boys of ANECHOIS. Going on the road is fun, especially if you're in another country altogether. You need to get your bearings right, familiarise yourself with the surroundings of your hostel, know where the nearest 7-11 is, public transport and how it works - but there we were on Limbo Street on the first day, underneath the Kalayaan flyover with the only Pinoy in the band, bassist Dale Roswald who was already getting acquainted with the sari-sari store and some Fanta Orange.

Having arrived on Friday morning, there was not much down time for the band: only because the first show was that very night. But one always has time for chicken. Reunited with everyone, a few surprises here and there, and after a flurry of social media and Instagram, it was time to seek sustenance. And so, the Shadow Of A Sound Tour began in a Kenny Rogers chain in Market! Market! at The Fort. 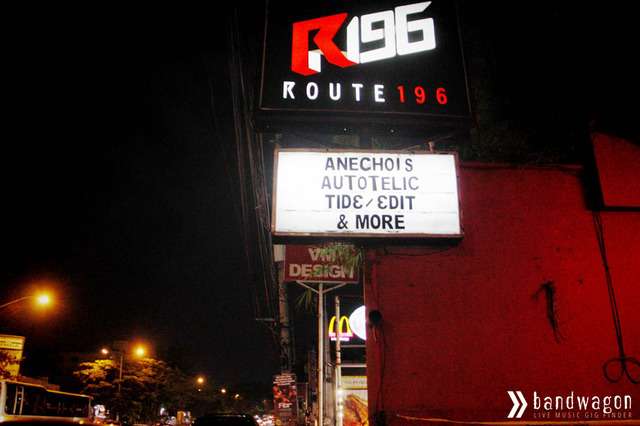 Quezon City’s Route 196 was the first place for ANECHOIS’ debut. Ah Quezon City, part of Metro Manila; you have no idea how many times I have heard that it is the size of Singapore. Located at the side of a huge main road, this is no hole-in-the-wall joint. Home to many, many indie gigs in Manila, it is be packed nightly with different crowds. Yes, there is a sort of division - indie scenester, post-rock crowd, metal heads, etc. A local friend commented: "Oh wow I go here a lot but I have never seen these people before." Instant Anthropology lesson.

It was close to 1am and headliners ANECHOIS were only just setting up. Route 196 was still crowded with people sober enough to properly enjoy live music. Earlier that night, we saw the likes of some local acts: the dancey synthpop Autotelic who added in a ballad or two, post-rockers Anton and The Salvadors, some good old rock and roll with a hint of indie by Strange Creatures. The vibes that night was pretty much ‘go with the flow’, with the bands themselves mixing up genres and songs. A Beatles’ song here, a Tagalog ballad there but it was all in good fun. 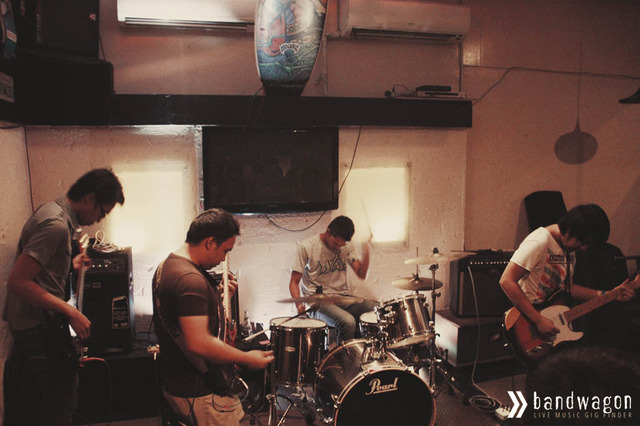 And then Tide/Edit happened. These pals of ANECHOIS took on the stage with energy reminiscent of our favourite Japanese band, Toe. We’ve been following their music for a while now but nothing prepared us for watching them live (finally). Post-rock but with a hint of mathy electronica and almost classifiable as indie, they're not one for labels. Instead, these guys prefer their music to be called “happy music”. That’s fine with us because that was the vibes we got from their performance. Though they pulled in quite a crowd, they made sure they used their moments to put the limelight back on ANECHOIS. True bros indeed.

It must’ve been nerve wracking for a foreign band to be headlining an established lineup of musicians and starting your set only at 1am. Still, these enthusiastic people stayed put in Route 196 for ANECHOIS. Looking out at the courtyard before the band took the stage, there were people milling around the merch table, getting their EPs and band t-shirts (that I helped design lol) and chatting with the band. Later on, nervous-making feels + unfamiliar crowd + another country, it showed. Still at the second song, an attendee started shouting after ‘Wraith’ – Ang ganda! Mind blown talaga! Basically meaning: this is awesome, this is really awesome. 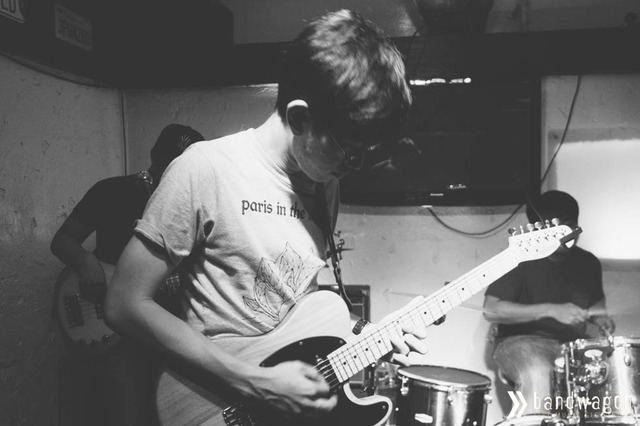 And so, this was how ANECHOIS won over the Manila crowd. Playing songs from the EP and a couple of new ones, the last band of the night gave their best. Trivia: there were some same faces the next night, with band shirt and all. Despite the nerves and the late night, the band had a pretty successful first show ending the night on a pretty high note.

I was standing on the sidewalk of SaGuijo Café and Bar where it had rained earlier making the air as stuffy as hell, next to a balut pushcart and another one selling fried fishballs and that when was it hit me - I was faraway from the Home Clubs and Esplanades at home where everything was cleaned and organised immediately. I liked this feeling and celebrated by having a cooked balut, which literally means I had chicken in egg. Which tasted pretty weird and real salty. Food was a constant adventure on this trip, together we hit all the important fast food chains, tried the prominent local dishes and desserts, managed to score free Indonesian cuisine at a weekend market, took an intense liking to their regular breakfast (Tapa) and their version of tau huay (Taho) - ah we could really document this in separate article but I digress. 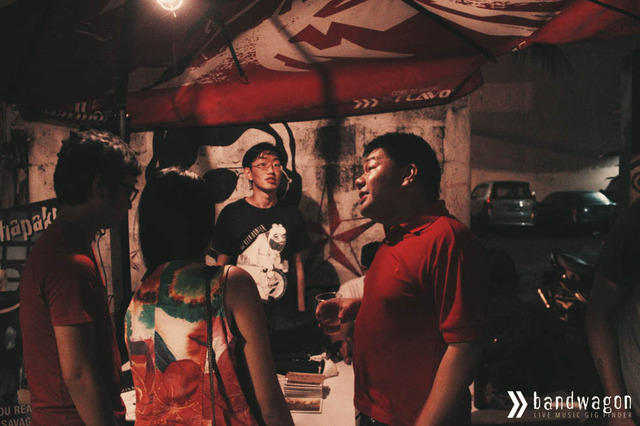 Day Two for ANECHOIS started off as normal as possible. Waking up late, exploring malls, and Jollibee of course. While everyone was scattered everywhere in the day, the band reunited once again when it was dark outside to head to SaGuijo. From some of the things we had learnt from the trip, nothing really starts on time here, and also that you can purchase cigarettes from certain car boots for cheap.

A smaller venue, SaGuijo packed quite quickly but people shuffled in and out for cigarette breaks and fried chicken hunting regularly so that system works, don’t go trying to fix it. There was no stage here so bands performed in the corner of the first floor. This also meant that you’re pretty much face to face with the band, fully immersed in the music. Like the night before, there would be a band who synths: Paranoid City, a more accessible band with a rock edge: Between Archery and Olympic, an accessible and easy-to-get-into post-rock band: Tom’s Story. 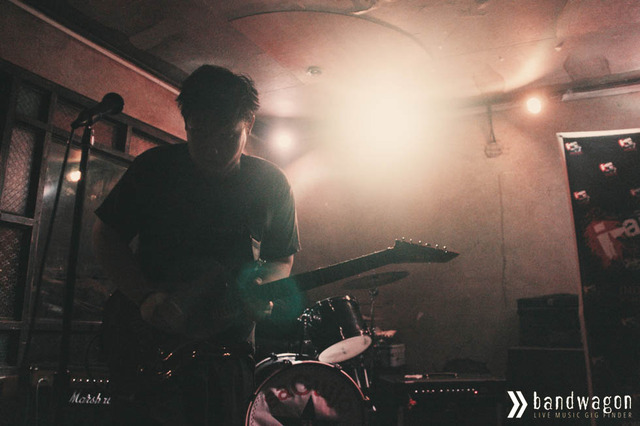 And once again, Earthmover happened. ~*Bandwagon Recommends*~
Earthmover’s music, how can I say this, is pretty powerful stuff. Standing so close to the band, I found myself entangled in their heavy and punishing physical sound, touching my face in intervals just to make sure everything’s still in the right place. Our esteemed editor Ilyas made sure he left with a copy of their EP. Some precious loot it is.

Before I move on to talk about ANECHOIS’ last performance in Manila, we would like to dish out some love towards the organisers and promoters of the event, Green Apple Productions for putting up two unforgettable musical nights in Manila. +10 also to the emcees Alvin and Christian for keeping up the hype during the shows. Giveaways, jokes and making Dale speak in Tagalog to the crowd – we really appreciated having the two hosts to keep the nerves low and the laughter loud. 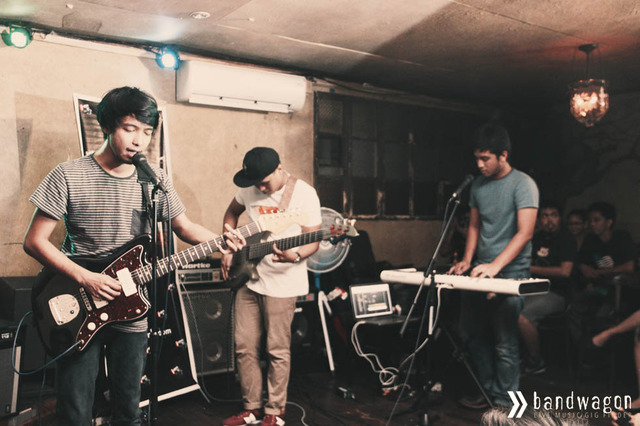 When ANECHOIS came on for their last ever performance in Manila for the tour, the band projected the hard-won calm of a seasoned SaGuijo performer. Putting a definitely stronger performance that night, we even saw frontman Zeek resume his hand-gesturing and finger-waving duties. The new song simply titled “MRT” saw not only us (we were hearing for the first time) vibing to the music but everyone else around. Stronger, tighter and sounding more complex, ANECHOIS seemed magnificent on their last show of the tour. The band’s ability to bathe listeners in emotion without any dictation was in full effect that night in SaGuijo.

The following days before heading back to Singapore was a jumble of interviews, traffic jams, trying more local cuisine, some of the band members even catching Deftones in Manila, guzzling burgers from a stoner burger joint and visiting a sort-of amusement park – it was just like hanging out with the band back home but in a country where segway parties happen. In which we participated in. Yes, this is truth.

Even paralysed in traffic, crazy heat, cripplingly bad 3G and monster malls amid city slums, Manila has been brilliant. We don't know about the band, but we'd come here a few more times to properly consume the food, the music scene, and the city. 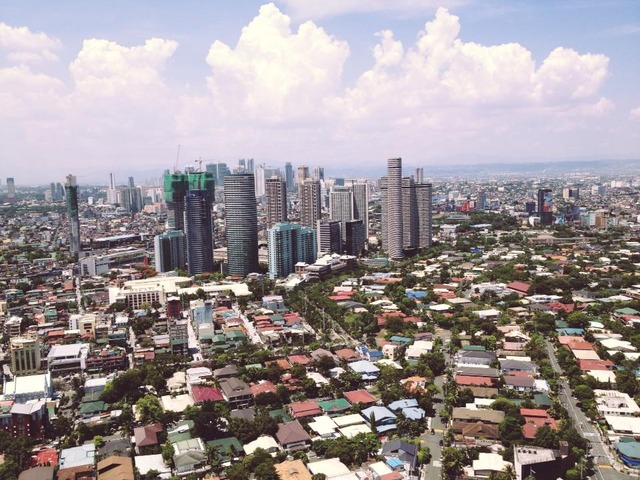