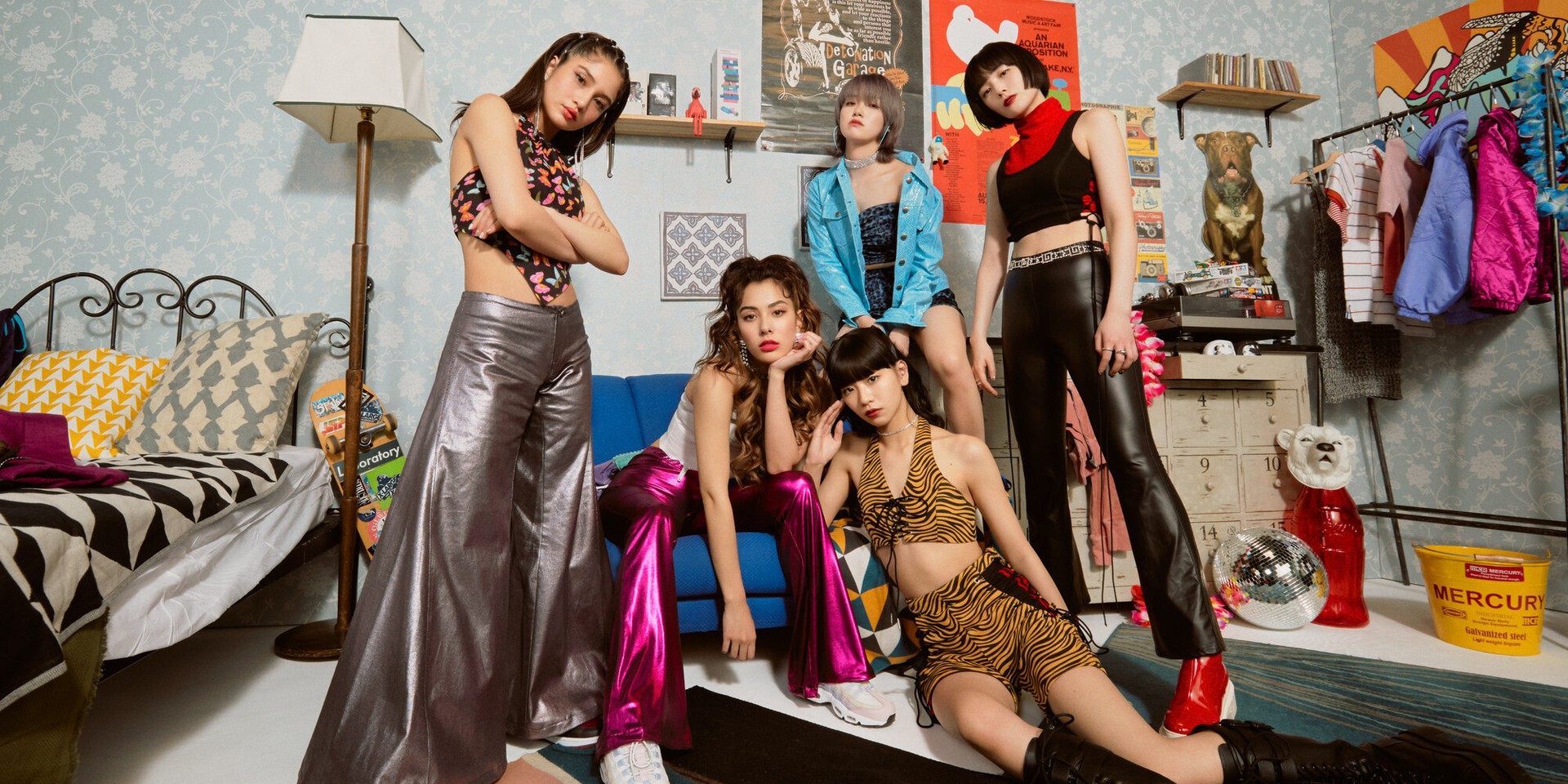 FAKY aren't your typical girl group. Empowered and unafraid, the group are embracing their uniqueness and individuality, even if it means showing their flaws.

Since their inception in 2013, the group has been relentlessly challenging the limits of J-pop. Whether it's with their music, fashion, or just their personalities, FAKY has never been a group to follow the status quo. Even with several changes to their lineup throughout the years, the five-piece act has never faltered and continued to showcase what it means to be authentic and daring.

"We want to spread the message that we aren’t putting a mask on while we sing our songs or perform them. We are who we are on stage and in our private lives. We all have different characters and in no situation are we trying to change to blend in,"  FAKY tells Bandwagon.

FAKY consists of five members, all hailing from different cities across Japan and the world. Mikako comes from Fukuoka in Southern Japan, Hina from Kyoto, Taki from the Philippines and France, and Akina from California, all of whom join Lil' Fang in the bustling city of Tokyo.

Coming from various backgrounds and cultures, the group boasts a unique sense of artistry and musicality that has turned heads from all corners of the world.

"Our strengths are that each of [our] characters is clear. Five people with completely different nationalities, ages, and personalities are united, each with their own background and will," says Hina.

Taking their name from the word 'fake', 'FAKY' serves as a reminder to the members to be genuine and true to themselves even amidst the glitz and glam. "By daring to call ourselves 'fake', we try not to forget that we are actually real," says Lil' Fang.

"We wanted to challenge ourselves to do and be the exact opposite of what people would expect from us given our group name," says Akina.

For the members, FAKY is more than just a group. Having toured the world together, Hina, Lil' Fang, Taki, Akina, and Mikako all found a family in one another. When asked what was the best part of being in FAKY, they all said: "Each other."

"The girls have become sisters to me and I know they will always have my back as I will have theirs! We have the most fun every day doing what we love, and we get to share that with the world," says Akina.

"Work doesn’t feel like work, it feels like you’re performing with family. The best part is that I share the stage with the people I love," says Taki.

Growing up, each of the members had their own journeys towards music. For Akina, Lil' Fang, Hina, and Mikako, it was innate, having grown up either taking dance lessons or making music; while for Taki, it was a happy accident.

"To be honest. I am the kind who was put into the situation and just fell in love with it immediately. Of course, I always loved listening to music but never thought it would be a way of expressing myself," says Taki.

With their own individual passion and love for music, the group found themselves in the world of J-pop. The current lineup of members joined FAKY at different points in the group's history, with Akina joining in 2016, Hina and Taki in 2019, and Lil' Fang and Mikako having been members since the group's debut.

FAKY put out their debut single 'Better Without You', off of their first album The One in 2014 which spoke about standing strong and believing in your dreams. The song and album were highly regarded by fans all over the world, propelling the group's name up the ranks of J-pop.

Despite it being released over seven years ago, the members still have fond memories of the album and owe so much of the group's success to The One, especially its title track 'The One'.

"'The One' is the most important songs in my FAKY life. I came to Tokyo from Fukuoka to join the group but it was honestly hard at that time. When I recorded the song, all the lyrics were important to me, and not only at that time, but even now. The lyrics of the song are still my motto," says Mikako.

"Taki, Akina, and I haven't recorded The One or performed it live but I think the album are important and meaningful. It marked the beginning of FAKY," says Hina.

Since their debut record, the group has moved between an array of genres and concepts – from R&B to electronic to funk. Constantly evolving and growing, FAKY prides themselves on their versatility and innate adaptability. Taking inspiration from all the places they're from, the girls hope to create music that touches not only their fans in Japan but also all across the globe.

"It's really difficult to categorize our music into one genre. One of our biggest goals is to put out a single completely different from the one before. As of recently, the members ourselves write a majority of the lyrics so we would like for our listeners to feel closer to us through our words," says Akina.

"We want to continue to try various music styles without being bound by one genre, and we continue to convey our desire to reach not only Japan but also the world across generations and genders," says Lil' Fang.

'half-moon' is one of the group's most popular tracks, amassing over a million streams on Spotify and garnering over 3 million views on YouTube. Released early last year, the song is a pop ballad written by Lil' Fang and Hina that talks about the sad feelings of love.

"'half-moon' is a song Lil' Fang and I wrote based on what I experienced when I appeared in a love reality show. People who were watching the reality show were able to listen to this song in conjunction with the story, so it was easier for them to empathize with their emotions and to sympathize with them," says Hina.

"I think 'half-moon' resonated with so many people because the lyrics were so relatable. We don’t have too many ballad-type songs so, in that sense, this song was an introduction to our individual voices as well," says Akina.

Most recently, FAKY released their latest single 'The Light', a cheerful track that they hope "spreads positivity to anyone who needs it most during this pandemic".

"We strongly felt that it is possible for us to encourage everyone with music and to invigorate them, especially because the influence of the coronavirus has made the world difficult. So, we made a bright cheering song," says Hina.

"The story behind 'The Light' is that after all the struggles we have been through all around the world, we wanted to mind everyone that there is always a light. That not everything is dark and that life can still be light and bright," says Taki.

'The Light' is the first of many projects the group has planned for the year. While they're still waiting to meet their fans in person, FAKY has a number of releases lined up to share with the world.

"We have a lot planned music-wise this year for our fans! We are experimenting with new genres and sounds and can’t wait to share all those ideas with everyone. We are also writing more and more of our own lyrics so we can’t wait to share those stories as well," teased Akina.