50 has become the magic number in 2015 and with good reason. With the ever-continuing onslaught of projects commemorating the 50 years we've grown as an independent nation, the music industry has had a hand in celebrating 50 years of Singaporean music that ranges from a multi-language concert extravaganza that transpired last weekend, an ongoing video series by Lush 99.5fm and music streaming service Rdio, to a retrospective exhibition depicting the labor and strife the Singaporean rock scene had to go through from the 60s.

We've come a long way from the harsh regulations and setbacks the music scene suffered early on, now we have local artists signing with major labels, headlining big concert venues here and performing as far as the UK. Despite the incoming expectations for grand gestures as we ushered in 2015 just a few months ago, 2015 has become a watershed year for Singaporean music.

The best part? There's still so much to look forward to.

As for the The RSC's 100 Bands Festival, which launched last year in June, it started a retrospective celebration of local music by scouting 100 different acts all around Singapore, arranging a neat selection that's both eclectic and unifying in all their unquestionable talent under one roof. Taking place in the endearing heartland area of Kovan, it revelled in what made our tiny country great — with a bustling hawker food centre nearby and a makeshift art bazaar setting up base in a former bus terminal just inches away from the main stages, it had all the imprints and DNA of a truly Singaporean festival.

This year, with the empowering SG50 campaign, 100 Bands returns, bigger than ever. How big? Well, take that amount of 100 bands and add 50 local acts to the equation — belonging to the burgeoning and thriving local electronic music scene — and you now have 100+50.

With ambition requires a bigger home fit for a grander vision, this time Bedok Reservoir serving as its base for three consecutive weeks. 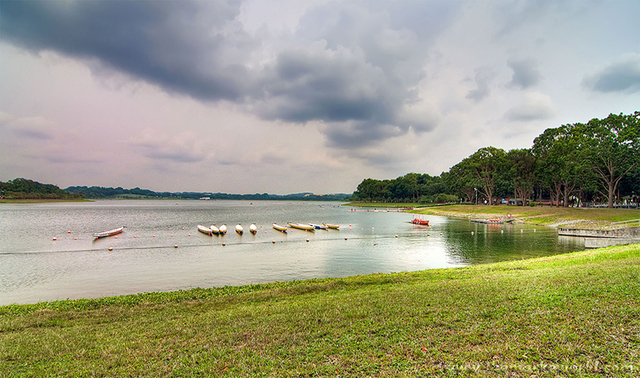 We would love a floating stage *wink wink nudge nudge*.

Says Razi Razak, founder of the long-running collective behind the festival: "The RSC and its affiliates are proud to present 100+50 this year in collaboration with People's Association's PLUS - Aljunied Cluster Arts, "Day time Play & Night time FUN." This year's edition allows us to also showcase +50 electronic acts/DJs which is a great addition to the musical environment that we plan to create for our audience."

The emphasis on local culture remains with the three-week running festival. "The festival represents the outlook of our local independent music scene, a growing community that we all grew up from." says Razak. "The line-up, both for 100 bands/+50 which we will release on a later date, will be programmed over 9 days and 3 weekends from 31st July to 16th August 2015 at Bedok Reservoir. We hope that with the increasing support and demand of local music, this festival could enhance the progress by providing a creative platform to the bands and the community."

With regards to the actual line-up of the festival, The RSC is keeping mum for now but look out for exclusive news from us. What we can say now is that about 75-80% of the bands performing this year did not make an appearance last year at Kovan. Trust us, there's no way you can miss this. Plus, it's free. Free's always good.