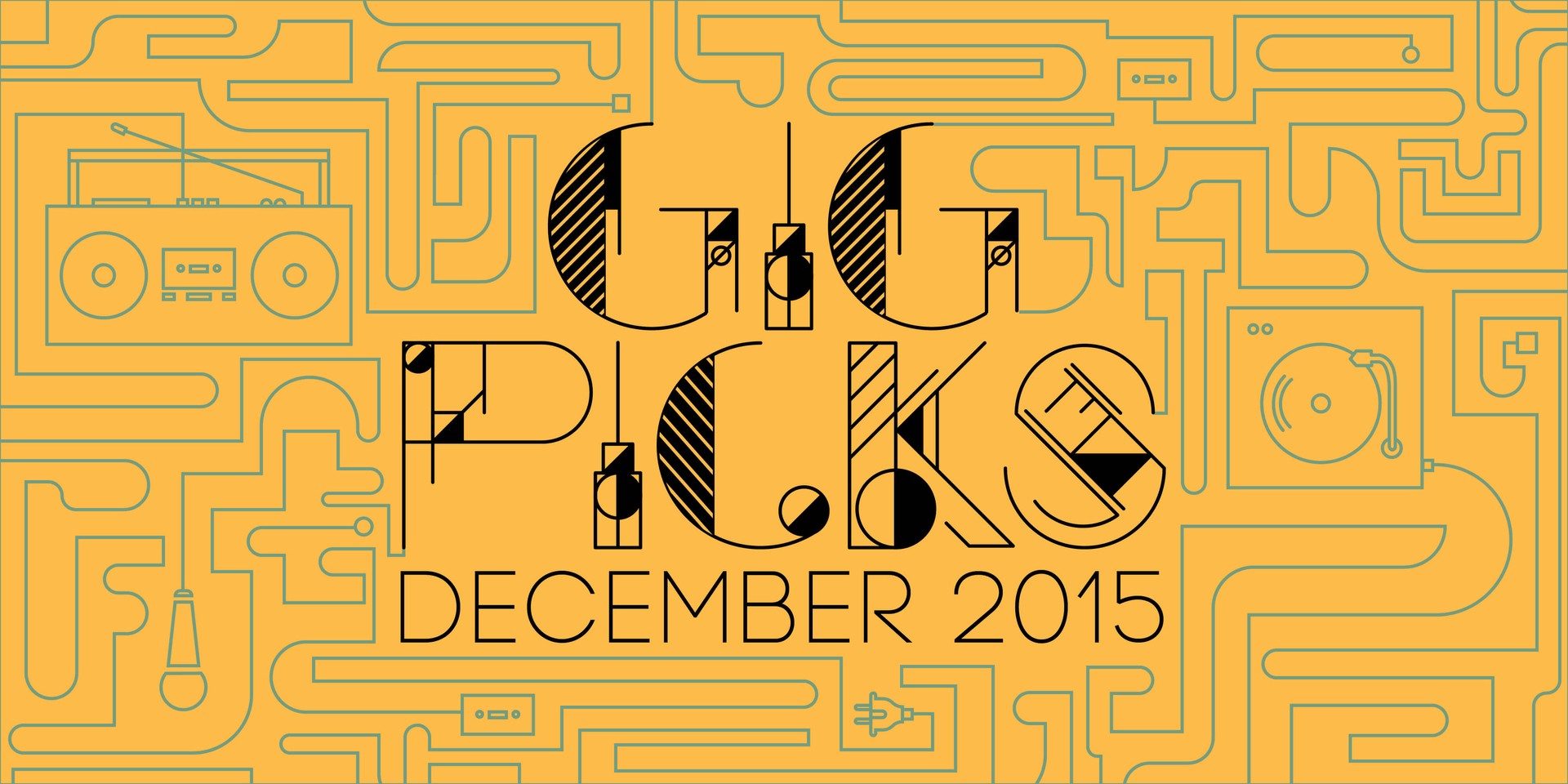 If you're not busy enough ticking down presents to purchase and preparing for an all-out 2015 Christmas feast, you can gorge on some exciting music events that's happening this month — lots of dance events, especially with the onslaught of producers and DJs coming over, notwithstanding the megafest that is ZoukOut, but there's also excellent curation by clubs that's perfect to end 2015 with. If you're also into yoga or ear-splitting math rock, you're in for a treat.

The famed Kult gallery is opening an F&B outlet right next door at Emily Hill, and in typical Kult fashion, they’re throwing a grand weekend-long party in conjunction with Sideshow to celebrate the occasion! Aptly called Kult Kafe, the space will be a cool new bar and performance space for creatives to hang out and work. For the launch, Kult Gallery will be showcasing some of their favourite pieces from a variety of local and international artists.

On the music side of things, there’ll be performances from the likes of Etc., Laek1yo, Deborah Emmanuel, Coconut Showhands (a DJ duo made of Syndicate’s Cherry Chan and ATTAGIRL!’s Natalie Pixiedub) alongside San Franciscan modern funk producer B. Bravo, famed Los Angeles-based DJ Captain Planet, Tom Shellsuit and Stew Bamrah.

We aren't regular practitioners of yoga ourselves — none of us have yet to step foot into a yoga studio, to be clear — but this new festival concept in Bliss Out 2015 definitely sticks out than your usual crazed music event. Promising "a truly memorable out-of-the-world experience" and a chance to "disengage with your world and escape into this new reality", it's awfully tempting to start hunting for some gym pants — especially when there's New Zealand electro-pop band The Naked and Famous and Singaporean singer-songwriter Inch Chua lined up.

FFO: nirvana (not the band)

Singapore’s biggest electronic music festival returns to Siloso for yet another massive, two-day, sunset to sunrise edition. ZoukOut 2015’s lineup boasts a who’s who of superstar names such as Tiesto, Paul Oakenfold, Kaskade, Porter Robinson and Armin Van Buuren alongside highly respected DJs from the deeper end the spectrum like Dixon, Paul Kalkbranner, Jamie Jones and Visionquest! And best of all, ZoukOut is also bringing back their local tent, now rebranded as the Kaleidoscope Arena (shout outs to Lush 99.5 FM), which will feature homegrown talent like Syafii, Daryl C, ATTAGIRL!, Darren Dubwise, Jean Reiki, KoFlow and Vandetta, amongst many other Singaporean favourites. This promises to be the festival’s most well-rounded and immersive experience, showcasing everything from top-notch music to art installations to costumed buskers.

FFO: parties that run till late (no, seriously, it really gets going until sunrise)

Fresh off the release of their immense debut album soma, electronic duo .gif will be launching the record with a special show that also ends off a mini-tour, one that marks their first foray into the Philippines. soma is as every bit as invigorating and aurally seductive as we hoped it would be, so we're eagerly waiting to see the band unleash fresh cuts off the album, many of which have not been played before.

Osunlade is the legendary music producer behind Yoruba Records, but even before he launched his influential Afro-centric imprint, the man has already accomplished enough in music for two lifetimes. As a prolific producer, he was behind hits for the likes of Gerardo, Patti LaBelle and Jazzy Jeff (amongst many others) in the late 80s and 90s, alongside his own incredible solo discography. Soon after, Osunlade became one of the biggest underground names in deep house, jazz and funk as both an DJ and a producer in the 2000s. Lately though, it's his work with world artists like Siji and Afefe Iku that’s really begun to open eyes around the world to the quality of African music. You can expect a smooth blend of all his influences for his forthcoming showcase at kyo that promises to be as educational as it is spirited.

FFO: heavy doses of soul, jazz and funk at one go (cocaine not included)

Obviously more than capable of an all-night take over, considering they'll be handling the first night of Sing Jazz 2016, so this will be a must-attend if you want a taste of what the label has in store. Ramesh and Ash will be joining DTW mainstays RAH and William J as they'll be setting the mood for the entire night, with a dizzying selection of music that'll range from soul to funk and deep house.

Known for their highly unorthodox approach to rock music, complete with unsettling odd time signatures and a hearty dose of dissonance, My Disco will be returning to Singapore once again, on the back of their acclaimed latest album Severe. They'll be joined by Wormrot, The Psalms, I Am David Sparkle and ruth along with Killeur Calculateur and Orbit Cinta Benjamin from across the causeway.

Hessle Audio founder Ben UFO is known as one the best pure DJs in the world (without a production career to fall back on), and it's a testament to his skill and varied selections that he’s managed to remain influential, relevant and cutting-edge all these years. Having evolved past his dubstep, garage and grime past, Ben UFO has spent the last few years swimming through crates and crates of off-kilter techno and Afro-centric house to form one of the most diverse and inspirational DJ palettes anywhere. He’s made a career out of presenting unfamiliar and experimental dance music to dancefloors around the world, and you can expect the same kind of eclectic goodness at kyo.